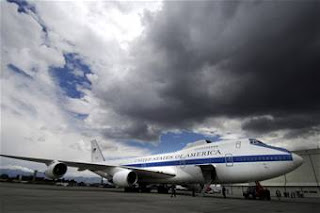 A National Airborne Operations Center 747 on ground alert. The reported sighting of a NAOC aircraft over Washington, D.C. on 9-11 has provided more fodder for conspiracy theorists (U.S. Air Force photo)
While much of our attention has been focused on the Iran NIE, we couldn't resist the temptation to respond to this item, posted at the Danger Room a couple of days ago.
Seems that the 9-11 Conspiracy Theory/Tinfoil Hat Club is all atwitter over a CNN report on a mystery plane--later identified as National Airborne Operations Center (NAOC) 747--flew over the White House on that fateful day. The NAOC jets are designed to serve as an airborne command center for the President (or his designated successor) during the most serious national emergencies, giving it the nickname of the "Doomsday Plane." For conspiracy theorists (helloooo, Rosie O'Donnell), the NAOC sighting is simply more proof that the government "coordinated" the attacks on 9-11.
Needless to say, such claims don't stand up to serious scrutiny. While NAOC 747s are based at Offut AFB, Nebraska, they deploy periodically to other bases in the CONUS, including Andrews AFB, Maryland--the home of Air Force One. Until the late 1990s, a NAOC bird was maintained on alert at Andrews, ready to launch on a moment's notice.
Since then, NAOC aircraft have routinely operated from a variety of bases, including Andrews; Wright-Patterson AFB, Ohio, Seymour Johnson AFB, North Carolina and Columbus AFB, Mississippi. NAOC platforms also reportedly "shadow" presidential trips abroad, operating from overseas U.S. bases that are close enough to allow a quick "pick-up" of the commander-in-chief in the event of a crisis.
The NAOC 747 seen over Washington on 9-11 was, most likely, on a deployment to Andrews. As the terrorist attacks unfolded, the aircraft launched, moving into position for a potential rendezvous with Air Force One and the President. As for that pass near the White House, there are several possible explanations. First, with hundreds of aircraft looking for a place to land, the FAA may have assigned that unusual routing to deconflict with traffic heading to Dulles and Reagan National Airports.
There's also the outside chance that officials on the ground asked the NAOC crew to survey damage at the Pentagon. ANG fighters flew over that facility just after it was attacked, but then moved to defensive positions at higher altitudes, and away from the city. Under those circumstances, the NAOC crew may have been the only available set of "airborne eyes" to take a look at what was happening at the Pentagon.
The exact itinerary of the NAOC aircraft on 9-11 remains unknown, but Offut AFB was its most likely destination. After leaving Florida that morning, Mr. Bush and his entourage flew on to Barksdale AFB, Louisiana and then on to Offut, before returning to the nation's capital. The president made that trip on Air Force One, although he had the option of switching to the NAOC. Aboard either platform, Mr. Bush had the option of remaining airborne for an extended period, thanks to the extensive communications suite (and airborne refueling capabilities) of both aircraft.
We hate to disappoint the tinfoil hatters out there, but the NAOC aircraft and crew were simply doing their jobs on 9-11. Nothing sinister or conspiratorial about that.