Getting (and Giving) an Earful 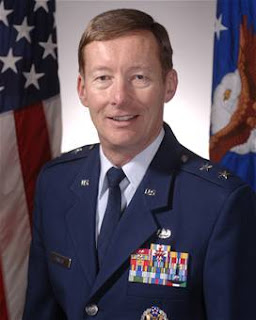 Major General Charles J. Dunlap, Jr., the Deputy Judge Advocate General of the Air Force. In an op-ed in the current edition of Air Force Times, General Dunlap strongly criticizes the Pentagon's "privatized" housing plan, calling it a "long-term risk to the Air Force way of life." Such candor from active duty flag officer is rare, to say the least. (USAF photo).

How to kill pests without killing yourself or the earth......

There are about 50 to 60 million insect species on earth - we have named only about 1 million and there are only about 1 thousand pest species - already over 50% of these thousand pests are already resistant to our volatile, dangerous, synthetic pesticide POISONS. We accidentally lose about 25,000 to 100,000 species of insects, plants and animals every year due to "man's footprint". But, after poisoning the entire world and contaminating every living thing for over 60 years with these dangerous and ineffective pesticide POISONS we have not even controlled much less eliminated even one pest species and every year we use/misuse more and more pesticide POISONS to try to "keep up"! Even with all of this expensive and unnecessary pollution - we lose more and more crops and lives to these thousand pests every year.

We are losing the war against these thousand pests mainly because we insist on using only synthetic pesticide POISONS and fertilizers There has been a severe "knowledge drought" - a worldwide decline in agricultural R&D, especially in production research and safe, more effective pest control since the advent of synthetic pesticide POISONS and fertilizers. Today we are like lemmings running to the sea insisting that is the "right way". The greatest challenge facing humanity this century is the necessity for us to double our global food production with less land, less water, less nutrients, less science, frequent droughts, more and more contamination and ever-increasing pest damage.

National Poison Prevention Week, March 18-24,2007 was created to highlight the dangers of poisoning and how to prevent it. One study shows that about 70,000 children in the USA were involved in common household pesticide-related (acute) poisonings or exposures in 2004. At least two peer-reviewed studies have described associations between autism rates and pesticides (D'Amelio et al 2005; Roberts EM et al 2007 in EHP). It is estimated that 300,000 farm workers suffer acute pesticide poisoning each year just in the United States - No one is checking chronic contamination.
In order to try to help "stem the tide", I have just finished re-writing my IPM encyclopedia entitled: THE BEST CONTROL II, that contains over 2,800 safe and far more effective alternatives to pesticide POISONS. This latest copyrighted work is about 1,800 pages in length and is now being updated at my new website at http://www.stephentvedten.com/ .

This new website at http://www.stephentvedten.com/ has been basically updated; all we have left to update is Chapter 39 and to renumber the pages. All of these copyrighted items are free for you to read and/or download. There is simply no need to POISON yourself or your family or to have any pest problems.