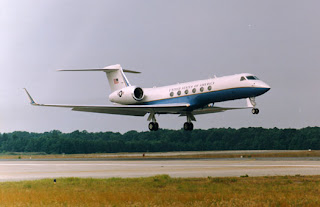 An Air Force C-37A, the preferred mode of transportation for Speaker of the House Nancy Pelosi (USAF photo).

When the CEOs of GM, Ford and Chrysler flew their private jets to Washington last December--to request government bailout money--members of Congress had a fit.
"It's almost like seeing a guy show up at the soup kitchen in a high hat and tuxedo," said Rep. Gary Ackerman, a Democrat from New York.
"Couldn't you have downgraded to first class or something, or jet-pooled or something to get here?" Ackerman asked the executives at a hearing held by the U.S. House Financial Services Committee.
[snip]
"I don't know how I go back to my constituents and say the auto industry has changed if they own private jets which are not only expensive to own, expensive to operate and expensive to fly here, rather than to have flown commercial," said Rep. Brad Sherman, a California Democrat.
Apparently, the same standard doesn't apply to Congressional leaders and their own addiction to private jets, operated by the U.S. armed forces and paid for by your tax dollars.
A new report from Judicial Watch shows that House Speaker Nancy Pelosi made repeated requests for military aircraft to shuttle her and her colleagues and her family around the country.
Representatives for the watchdog group, which obtained e-mails and other documents from a Freedom of Information request, said the correspondence shows Pelosi has abused the system in place to accommodate congressional leaders and treated the Air Force as her "personal airline."
Pelosi's office disputed the claim, pointing to White House policy enacted after the Sept. 11 attacks allowing for the House speaker to travel to his or her congressional district via military aircraft whenever possible for security reasons. Her office said she typically uses the same kind of aircraft used by her predecessor, Dennis Hastert.
But Judicial Watch said that Pelosi was notorious for making special demands for high-end aircraft, lodging last-minute cancellations and racking up additional expenses for the military.
The e-mails showed repeated attempts by Pelosi aides to request aircraft, sometimes aggressively, and by Department of Defense officials to accommodate them.
According to the documents, Pelosi's staff routinely attempted to reserve military aircraft for weekend use, then cancelling on short notice. Weary of the routine, one Defense Department official wrote "Any chance of politely querying [Pelosi's team] if they really intend to do all of these or are they just picking every weekend?...[T]here's no need to block every weekend 'just in case'..."
Other correspondence includes a discussion of House ethics rules and military regulations as they pertain to the speaker's request for staff, spouses and extended family to accompany her on military aircraft. In one case, Pelosi asked for permission to take her husband on a Congressional visit to Iraq. The request was turned by the Pentagon, which cited prohibitions on spouses joining Congressional delegations (CODELs) in combat zones.
Judicial Watch also uncovered angry e-mails from Congressional staffers, upset that specifically requested, top-of-the-line aircraft were not available.
"It is my understanding there are no G5s available for the House during the Memorial Day recess. This is totally unacceptable...The speaker will want to know where the planes are..." wrote Kay King, Director of the House Office of Interparliamentary Affairs. In a separate email, when told a certain type of aircraft would not be available, King writes, "This is not good news, and we will have some very disappointed folks, as well as a very upset [s]peaker."
The "G5" that Ms. King refers to is the C-37A, the military version of the Gulfstream V business jet. With a crew of five (including flight stewards), the C-37A can ferry a dozen VIP passengers in comfort and style. The Air Force currently operates nine C-37s; four are stationed at Andrews AFB, Maryland, where they often support Congressional junkets.
Judicial Watch claims that Ms. Pelosi is "using the Air Force as her own private airline," and given the constant requests for military transportation, it's hard to disagree.
But the Pentagon also deserves some of the blame, for catering to the demands of politicians (and the brass) with the largest fleet of VIP aircraft in the world. The Air Force alone operates 80 jets that are used almost exclusively for the transport of senior government and military personnel. Included in that total are:

The other services operate smaller numbers of VIP aircraft, bringing the total to well over 100. That number does not include the Boeing 747-400s that operate as Air Force One, or various types of transport aircraft--such as the C-17--that sometimes provide airlift for senior officials.

While many of the USAF's business jets are assigned to Air Mobility Command, the job of coordinating VIP airlift falls under the service's Vice Chief of Staff, General William M. Fraser III. General Fraser isn't the first VCofS to handle those duties; the special airlift coordination job has rested with the service's #2 officer for decades. It is, however, a reflection of the priority assigned to the VIP transport mission.

The Air Force clearly understands that Congress controls its fiscal future. If the service wants more F-22s (or a next-generation bomber), the airlift team working for General Fraser will do everything they can to provide that coveted "G5" for Nancy Pelosi.

Meanwhile, we haven't heard Mr. Ackerman, Mr. Sherman--or any other members of Congress --complain about all the money being spent on their fleet of VIP jets.

Posted by George Smiley at 6:01 PM

Too bad you didn't calclulate the hourly cost of the G5 and compare it to a SW Airline ticket.

There were some posts about a year and a half ago that Speaker Pelosi was miffed because Bush wouldn't allow her to use the 757.

The PDFs concerning House of Representatives CODEL tasking at judicialwatch have references to "C-9" aircraft, circa May 2007.

I thought the C-9s were out of the USAF and USN inventories? Or are the VC-9s in the USAFR and USNR?

Sam--A small number of C-9s still operate with the Naval Reserve and the Marine Corps; in fact, I see them shooting approaches (from time to time) at a commercial airport near my home.

I reember the 757 Fiasco.. and I also remember the anti-bush crowd boing the Air Force for not immediately providing a ready aircraft for the speaker.

With the Defense Budget being tied up by the President.. Should it the be the responsibility of the USAF to provide air travel for the Speaker?

As an aside, I've seen the President drop into smaller airports in a C-32. It, of course, became Air Force One while POTUS was on board.

The folks at the airport said the *really* impressive sight was after a presidential visit support C-17 dropped in... and seeing the ensuing takeoff when it was finished unloading.

It's always nice when you can not only be informed, but also entertained! I'm sure you had fun writing this article. Excellent entry! I'm been looking for topics as interesting as this. Looking forward to your next post.