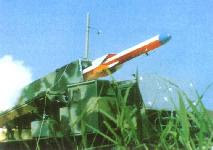 A C-802 anti-ship missile, being fired from a shore battery (GlobalSecurity.org photo)

Reuters claims that Iran has test-fired a new "long range" missile, although specific details on the weapon--and its capabilities--are lacking.
And, making matters even more muddled, the wire service report is based on Iranian press accounts. As we've seen in the past, Tehran's military (and its state-run media) are not above fabricating accounts of military "achievement." Last year's "photo-shopped" image of a missile test are one case in point.
According to Reuters, the initial report consisted of a scroll on Press TV, another government-controlled media outlet. "Iran test fires new long-range missile" said the headline, without giving details. Later, the semi-official Fars news agency said that the weapon is actually an anti-ship missile, launched by military aircraft. The missile has a reported range of 110 km.
But available information suggests the weapon isn't new, nor does represent a significant upgrade for Iranian military capabilities. The missile is believed to be a variant of the C-802, a Chinese-designed, anti-ship missile that has been in Tehran's inventory for more than a decade.
Normally fired from surface vessels or shore batteries, the C-802 can also be employed by tactical aircraft. Intelligence sources tell In From the Cold that Iran has been experimenting with air-launched versions of the missile for several years. Imagery from 2006 showed a possible C-802 mounted on an F-4 Phantom at Iran's Bandar Abbas Airbase, near the Strait of Hormuz. There have also been reports of "live fire" tests from F-4s, which remain the workhorse of the Iranian fighter inventory.
Despite its relative age, the C-802 remains a threat to naval vessels and commercial ships. During its war with Israel three years ago, Hizballah used a C-802 to damage an Israeli Saar-5 patrol craft, enforcing a blockade off the Lebanese coast. A second missile damaged a cargo ship operating in Lebanese waters. A subsequent investigation indicated that the Israeli vessel was on "weapons tight" status at the time of the attack, preventing use of its own missiles for self-defense.
With a maximum range of 120 km--and past testing involving Iranian aircraft--the C-802 seems to fit the general profile of the missile tested by Tehran. Other reports suggest that Iran and North Korea have modified the C-802, improving its accuracy against naval targets.
Posted by Unknown at 12:19 PM

Could be a Noor. Could also be a variant of the Nasr.

The figures for weight of the tested missile are lighter than a Noor, and the range less. A standard Nasr-1 weighs less than the fired missile and has less of a range.