North Korea is apparently in the final stages of preparing its Tapeodong-2 missile for launch.

Commercial imagery from DigitalGlobe, posted by GlobalSecurity.org, shows the the three-stage missile sitting on the launch pad at Musudan-ri. Analysts say the service arms on the tower are located away from the rocket. Fueling operations and final check-out could begin in a matter of days. 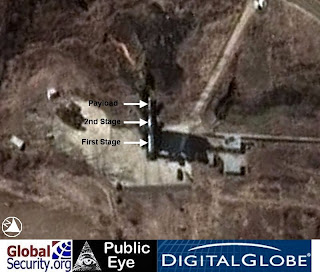 Pyongyang has announced plans to launch the TD-2 in early April. North Korea claims the missile is a space launch vehicle that will put a communications satellite in orbit. But many intelligence analysts believe that the event is nothing more than a test of the long-range missile, capable of reaching targets in Alaska and Hawaii.

At this late juncture, the DPRK has even discontinued efforts to hide their preparations. GeoEye imagery from two days earlier (and published by the U.K. Telegraph), showed the missile covered by a shroud. While Pyongyang has used this technique before previous tests of the crude ICBM, the timing of the shroud's removal--up to a week before the launch--reflects a highly confident North Korean regime. 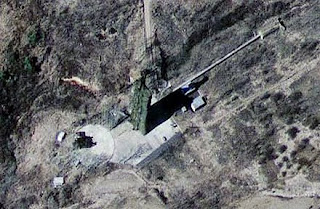 March 27th imagery of the test site showed a shroud-covered TD-2 on the launch pad (GlobalEye via U.K. Telegraph)

And why not? On Sunday, Defense Secretary Robert Gates said there is "nothing" we can do to prevent North Korea from violating international law by launching the missile. Dr. Gates also told Chris Wallace of Fox News that it is "unlikely" that the U.S. or its allies will attempt to intercept the rocket, despite the availability of layered missile defenses across the Pacific region.

In the interview, Gates seemed to downplay the significance of the event, noting that senior U.S. officials do not believe that North Korea has the ability to mount a nuclear warhead on the missile.

With all due respect to the SecDef, his comments were little more than an exercise in verbal gymnastics. Truth be told, there is a lot we could do to stop the missile launch, from a cruise missile strike against the launch complex, to an in-flight intercept by U.S. and Japanese Aegis destroyers in the Sea of Japan, or land-based interceptor missiles in Alaska and Hawaii.

While the technology is capable--and maturing rapidly--the political will is non-existent. The Obama Administration has clearly decided that a successful intercept isn't worth the geopolitical consequences. North Korea has threatened to pull out of the Six Party nuclear talks (and potential military strikes) if allied forces attempt to shoot down the TD-2.

But Mr. Gates and Mr. Obama should ask themselves a more salient question: are we prepared for the fallout for a successful missile test? In a matter of days, Pyongyang will fire a multi-stage missile across the airspace of a key American ally, and in the general direction of Alaska or Hawaii. If the TD-2 doesn't fall apart, it will be a technical triumph for Kim Jong-il, a propaganda victory over the U.S., and a harbinger of things to come.

Rest assured, North Korea will eagerly share its long-range missile technology with other rogue states, including Iran. So, in a matter of a few years, we'll have to worry about an ICBM threat from Tehran and Pyongyang--and the likely prospect that those missiles will carry a nuclear warhead.

But what about our efforts to deter the DPRK nuclear program? Well, if North Korea is willing to ignore various U.N. resolutions by launching its TD-2, then it will gladly violate the recent Six Party Accord. So much for years of "engagement," and all that careful diplomacy, led by our new man in Baghdad, Ambassador Christopher Hill.

And, we haven't even touched on the broader, regional implications of the pending test. Japan, South Korea and even Taiwan will be spurred to upgrade their military, and possibly join the nuclear club as well. U.S. relations will those countries--already strained by our coddling of North Korea--could easily fracture.

It's a scenario that Mr. Obama and his advisers won't discuss--at least publicly. From their perspective, the upcoming launch is an event to be "managed" for media implications, not the military consequences. They'll worry about those pesky details somewhere down the road--the second term perhaps? We can only imagine what North Korea will have in its quiver by then.
Posted by Unknown at 9:31 PM

Is this the "challenge" that Joe Biden referred to when he spoke in Seattle during the campaign? Is this "our" response - "there's is nothing we can (read are willing)to do"? Kim Jong Il has measured Barrack Obama and has found him wanting.

What has happened to the America that I grew up in? What kind of cues are the Russians, Iranians, and Chinese going to take from this? As I have posted before, it is amateur hour at Foggy Bottom and the White House. These people are going to get a lot of us killed.

I say let the launch go ahead. If it blows apart on the launchpad, great.

I don't think anyone outside North Korea trusts the statements of Kim Jung-il. But even liars can tell the truth sometimes.

If I were in charge of US/Japanee/South Korean defenses, I'd keep a close eye (lock) on the missile and the moment it begins anything resembling a downward trajectory over sovereign air space, down it without any further adieu. Shooting it down before that point would have more negative consequences. But if it comes down intact in another country it becomes an international threat.

There's nothing wrong with North Korea launching a communications satellite. Of course, if intel says it's something else... "We would like to express our condolences regarding your unsuccessful satellite launch."

I'm with Brian on this one. There's a world of difference between "it's a satellite launch to prove ballistic missile capability" and "it's nothing more than a test of the long-range missile." This is their Sputnik, and however twee we may find it, we should still be careful not to shoot it down until we're sure they're actually aiming at something other than orbit.

I'm sure there are some very smart people at FOB-2, Dahlgren, and a few other places figuring out where the firing window is to the tenth of a second.

Your list of possible nuclear powers is far too short. In the Pacific region, you should add Australia and Indonesia. If Iran goes nuclear, too, you will have Saudi Arabia, Turkey, Egypt, Libya (again), Algeria, Italy, GERMANY!!!, Switzerland, Sweden, Poland, Nigeria, South Africa (again), Brazil, Argentina, Chile, Venezuela, Canada and Mexico on the list, too.

Strictly a hypothetical question for those who know more than I do.

Since (technically) the US is still at war with NK, if the political will was there, we "could" stage a preemptive strike on the missile?

Of course, the NK army would probably crash across the border, but my question remains, we are "technically" still at war with NK?

I'll bet that the two US reporters recently seized by North Korea and to be held for trial for "hostile acts" will be cannon fodder and publicly executed if Japan or the U.S. shoots down the TD-2. I have no doubt that Obama will avoid the shootdown in what will be a vain attempt to keep these two out of NK prison or worse.

Hell, he'll probably agree to full diplomatic relations to get them back, for all the good that'll do.

The 1953 treaty is a truce only, and only with the UN. SK & NK only ever agreed to an armistice and as such are still in a legal state of war.

Thanks for the clarification.