Looking for a New Fighter? 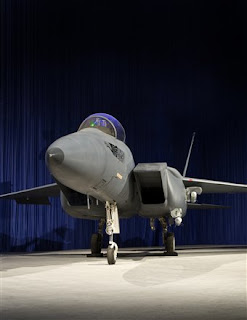 The newest version of the F-15, the "Silent Eagle," a stealthier version unveiled earlier this week at the Boeing plant in St. Louis

...But the U.S. won't export the F-22, and you can't afford the JSF? Then how about a "stealthy" (or perhaps we should say "slightly stealthy") version of the F-15?
Tuesday in St. Louis, Boeing unveiled the prototype of its "Silent Eagle," a modified F-15E with internal weapons bays built into the conformal fuel tanks, and the vertical fins canted outward, to further reduce the radar cross-section.
Boeing believes it could sell as many as 180 of the advanced F-15s. Similar technology might also be incorporated into stealthier versions of its F/A-18 Hornet.
Posted by Unknown at 4:32 PM

Now that that the Obama administration made it plain that they wish to cancel to F-22.. a "stealthy" version of the F-15E is introduced.

I wonder who is going to buy the 180 airframes first.

Let's hope it's the USAF. Buying moderate stealthy stuff is probably the only way the AF can keep up some modicum of air strength in the current climate. Full stealth is not needed in all areas.

By the way, please note that the Navy has scrapped its litoral craft and advanced hull forms because the ships cannot support the Aegis anti-missile system. Burke-class destroyers will continue to be built.

Having a glorious 23 years in the tactical aviation profession, followed by a bit of participation on the pilot portion of the YF-23 design team at Northrop, I've got a bit of background in stealth aircraft.

While I'm sure a slicked and smoothed F-15 with conformal gas bags and internal weapons would have lower RCS, you simply can't make a silk purse out of that sow's ear. The F-15 is a 1972 vintage design. Those intakes, the massive front frames of the engines, the incredible hot tail section IR profile, and the numerous flat surface aspects all put it well behind any current generation system, particularly F-35 which is well on its development track and with plenty of sunk costs.

This ain't gonna happen...but then I said that about the current administration.