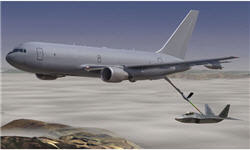 A Boeing artist's concept of the Air Force's next-generation tanker, based on its 767 airframe (Boeing illustration via Aviation Week)

With any luck, we’ll know the “latest” winner of the Air Force tanker competition in December, more than five years after the process first began.
The new deadline was announced yesterday by senior Defense Department officials, who outlined procedures for re-opening the contract bidding process. They told a Pentagon press conference that a new request for proposals (RFP) is expected late this month, or in early August. That will allow the competing firms, Boeing and Northrop-Grumman, to re-bid “wholly new proposals,” with the winner being announced by the end of the year.
While movement in the long-delayed tanker program is certainly welcome news, yesterday’s announcement was another black eye for the Air Force. During yesterday’s press conference, the same DoD officials (Defense Secretary Robert Gates; acting Air Force Secretary Mike Donley and Pentagon Acquisition Chief John Young) revealed new plans for handling the tanker bids.
Under the modified acquisition process, Mr. Young’s office will not only make the final selection, it will also lead a newly-formed, source selection advisory committee. Normally, most of those advisory functions (short of final selection) are performed by the military services.
Washington Democratic Congressman Norman Dicks explained the reason for change rather succinctly, observing that “no one trusts the Air Force.” That might be an understatement. After screwing up the process two times previously, the service has been given a backseat in the third round of contract bidding. Think of it as Mr. Gates affirmation that Air Force acquisition is hard broke.
The latest round of bidding became necessary when the Government Accountability Office found flaws in the service’s last tanker choice, announced earlier this year. In a highly-controversial decision, the Air Force selected Northrop-Grumman to build its next generation of air refueling planes, using the Airbus A330 airframe.
Boeing protested the decision, claiming (among other things) that Northrop-Grumman had been given “extra credit” for offering a larger aircraft, criteria not found in the original contract specifications. A GAO review upheld the Boeing protest, determining that the Air Force made a number of “significant errors” in making its decision and setting the stage for a new round of competition.
During yesterday’s press conference, Mr. Young suggested that the new bidding process might be streamlined. Air Force requirements for the tankers haven’t changed. The Pentagon’s source selection advisory panel may have to re-calculate program cost and capability values, but the “data haul” won’t be as intensive as in past rounds of bidding.
Young said he hopes to make a “valid” acquisition decision as soon as possible, while speeding the delivery of new aircraft. The USAF hopes to have the first of its advanced tankers in service by 2013, replacing Eisenhower-era KC-135s.
However, the Pentagon’s acquisition czar hasn’t offered a plan for fixing the Air Force procurement process. Last month’s GAO ruling stunned the USAF , and yesterday’s announcement of a modified acquisition process was, essentially, a no-confidence vote in the service's acquisition corps, now led by Assistant Air Force Secretary Sue Payton.
Repairing the service’s acquisition system is a job that will fall on Mr. Donley and the next Air Force Chief of Staff, General Norton Schwartz. Amid the host of problems now facing the service, the acquisition mess ranks at the top of the list, and for obvious reasons. The Air Force has other big-ticket programs that are also in acquisition limbo, most notably the contract for new combat search-and-rescue helicopters, or CSAR-X.
When the service selected Boeing’s HH-47 as the winner in November 2006, the decision was met with a formal protest from losing bidders Northrop-Grumman and Sikorsky. Sure enough, the GAO upheld that protest, forcing the Air Force to start over again. Almost two years later, the CSAR and special ops communities are still waiting for a new helicopters to replace the aging, under-sized HH-60 Pave Hawks that now make up the Air Force rescue fleet.
Loren Thompson, the respected airpower analyst at the Washington-based Lexington Institute said last month’s GAO ruling “raises the question of whether the Air Force knows what it is doing.” Ensuing events—including Mr. Gates’ decision to strip the service’s acquisition authority in the tanker deal—have done nothing to challenge that assessment. Reversing that perception (and fixing the procurement process) will require all of the miracle-working skills that Mr. Donley and General Schwartz can muster.
Posted by Unknown at 1:42 PM

I read the shift in acquisition authority slightly differently than you do.
I believe this DoD move is designed to do one thing over all others: get a tanker going as fast as possible given the political climate. I base my opinion on three things.
First, the DoD and AF know it is politically unacceptable to proceed without addressing the GAO's findings (which IMHO are incredibly weak on 7 of 8 counts) so it moved authority up to the DoD. Second, DoD has decided to make changes to the RFP in only those areas that the GAO had 'findings'. Third, instead of cutting the AF out of the loop completely, the SecDef recognizes that out of more than 100 complaints made by Boeing, only a relatively few 'stuck', so the AF acquisition team will be assiting the DoD authority in the way forward: for the most part the AF's determinations stand.
Because of the DoD response to the GAO recommendations, Boeing's advocates in Congress cannot claim the AF or DOD 'ignored' the GAOs findings. Because the DoD is only revisiting the areas that were contested, this elevates the risk to any offeror who radically changes their offering.

Prediction: It won't be over in December. Boeing will claim they can only respond with further delays and they will radically change their offer, which their lackeys in Congress will claim is neccessary to ensure 'competition'.

Where the system is broken is how politicized these competitions have become. I think Boeing's corruption of the process is most ironic because I'm convinced their 'intensity' has little to do with the contract or even the military side of their business. I'm certain they, more than anything else, want to maintain their position as the only major commercial airframer in the U.S. For Boeing to quit after December will require some leadership changes at the top.

There are several things going on here.

It is vital to all the services that the USAF tanker fleet gets replaced ASAP. This resolves down to two issues for Gates.

The first is that Congress no longer trusts the USAF senior procurement officials to run the tanker procurement.

The second issue is that the other services don't trust those same USAF officials to be team players and not short non-USAF tanker needs in favor of more F-22 procurement.

The second problem is decoded as follows:

Please read summary paragraph #4 in the Government Accounting Office (GAO) report on the Tanker deal closely. (I found it at this link: http://www.defensetech.org/archives/004257.html)


""4. The Air Force conducted misleading and unequal discussions with Boeing, by informing Boeing that it had fully satisfied a key performance parameter objective relating to operational utility, but later determined that Boeing had only partially met this objective, without advising Boeing of this change in the agency’s assessment and while continuing to conduct discussions with Northrop Grumman relating to its satisfaction of the same key performance parameter objective.""

In the bidding process, the USAF originally wanted to use as much of the existing KC-135 infrastructure as possible. That is why Boeing was bidding the KC-767 rather than the larger KC-777, which could not use the same hangers and shorter air fields that the smaller KC-135 could.

The USAF decided mid-competition that fewer, bigger, tanker planes was better for the USAF procurement budget, and went for the KC-30.

In so many words, the USAF changed the tanker requirements in the middle of the bid process, they told Northrop-Grumman, BUT DID NOT TELL BOEING that it did so.

That is the biggest reason why the GAO upheld Boeing's protest, in my opinion.

I strongly suspect the reason why both Tanker replacement bids blew up on the USAF was the Fighter Pilot General's insistence to maximize F-22s buys in the USAF's limited procurement budget. The USAF brass involved with the bidding process were playing cost shifting games to move tanker replacement costs out of the service’s procurement budget and into the operations and facilities/infrastructure budgets.

Any infrastructure cost hits for switching to the larger Northrop-Grumman KC-30 mid-bid over the Boeing KC-767 would come from either the operations or facilities budgets; hence the USAF could buy more F-22s with the KC-30 than the KC-767, even if the latter cost less over all.

The original "Tanker leasing deal" was built around "using a different color of money" than what would be used to buy the F-22. Leasing would be part of the USAF Operation budget. By law, you cannot use “Operations dollars” to buy new equipment. That is what the procurement budget is for. Yet that is what the first “Tanker deal” did, leaving the F-22 “funding wedge” intact without the competition of tanker planes.

There are far more Congressional financial and reporting controls placed on the DoD procurement budget than either the operations or facilities line items. This "color of money" funding game is what attracted Sen. McCain's attention to the first tanker deal and uncovered the procurement fraud that senior USAF officials were involved in with senior Boeing officials.

This time, Boeing found out all of these latest rounds of USAF cost shifting games in their failed bidder out brief, and here we are.

Based on my professional experience in American military procurement, I would say the failure of both Tanker bids lies at the feet of the Fighter Pilot Generals, for their insistence of playing budget games to buy more F-22s.

Gates move to make the DoD run the procurement addresses both issues to a degree.

In addition, to shore up Congressional support for a 3rd rebid, Sec. of Defense Gates publicly knifed the Senior USAF procurement people in front of Congress (see below from the DoD Buzz blog).

""That enormous sucking sound you heard at the Pentagon Thursday was the intake of breath by the senior OSD and acquisition officials who handled the tanker contract when they heard Defense Secretary Robert Gates offer almost no defense of the contracting process that led to the Northrop Grumman contract.

Gates was asked Thursday point blank if he had confidence in Sue Payton, assistant secretary of the Air Force for acquisition, who led the team that decided to award the contract. “I have confidence in the team until I find evidence to the contrary,” Gates said. Given the recent forced resignations of Air Force Secretary Mike Wynne and Air Force Chief of Staff Gen. Mike Moseley, Payton must be getting ready to move out if asked since Gates also said the Government Accountability Office’s report found that the “Air Force team made significant errors.” At the same time, Gates did say he “needs to get a better feel for the nature of criticisms” made by the congressional watchdog and had not made any decisions about the contract yet, adding that the “first indication” he had of trouble with the contract award was the GAO report.""

The last time a Secretary of Defense said something like this in testimony before Congress, about a failed major military procurement, was when the A-12 Avenger program imploded on then Defense Secretary Cheney.

The end result of that mess was two Navy Admirals and a full commander getting fired from their jobs and demoted besides.

IMO, given Secretary Gates recent performance with US Army medical and USAF nuclear weapons scandals, now is a good time to be thinking of immediate retirement options, if you are a General officer or senior civilian in the USAF procurement field.