New Eye in the Sky 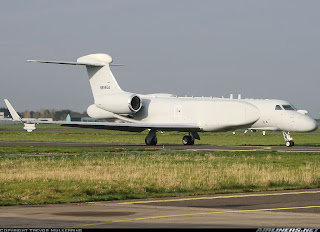 Israel's latest Airborne Early Warning/ISR aircraft, the Eitam, will be displayed publicly for the first time today. The surveillance platform, built on a Gulfstream G550 airframe, was photographed at an airport in Ireland earlier this year, enroute to Israel. It will be used to keep track of events in Iran and other locations (photo courtesy of airliners.net)

Israel says it will publicly display a new spy plane, capable of monitoring activity in Iran.
The aircraft is a modified Gulfstream G550, nicknamed the “Eitam” by the Israelis. Delivery of the first aircraft occurred earlier this year, and that jet was officially transferred to the Israeli Air Force in March. Today’s event will be the first time that the Eitam has been shown to the public.
RFDesign, an engineering publication, offered this description of the aircraft's capabilities in its February 2008 issue:
The EL/W-2085 AEW system is a long-range, high-performance, multisensor AEW that combines airborne early warning, tactical surveillance of airborne and surface targets, and the gathering of signal intelligence.
The four sensors feeding the AEW system are radar, IFF, ESM/ELINT and CSM/COMINT. The data generated by all of the sensors is continuously cross-correlated. This data is then combined with an automatically initiated active search by one sensor for specific targets detected by other sensors. A radar with conformal phased array antennas provides simultaneous coverage and instantaneous focus on selected targets. The advanced radar has several conformal phased array antennas that are mounted on the fuselage of the aircraft and provide up to a full 360-degree coverage.
In other words, the Eitam offers state-of-the art detection and surveillance of ground and air targets, at extended ranges. And, with access to a variety of intelligence sensors, information developed on the aircraft can be quickly fused and correlated into a larger battle picture, provided instantly to the mission crew and commanders on the ground.
More remarkably, the system is operated from a business jet platform, much smaller than other AEW, AWACS or SIGINT platforms like the E-3, RC-135, or the British Nimrod. Utilizing the G550 will produce considerable savings in operating costs, and it provides limited “cover” for potential missions.
Flying over the Persian Gulf, the Eitam would be virtually indistinguishable from other business jets, until it turns on its active sensors. And, since the aircraft uses advanced technology, it probably employs various techniques to minimize or mask its active signals, reducing detection probabilities.
Make no mistake: Eitam is anything but a stealth aircraft. But its signature is considerably smaller than most AWACS or SIGINT platforms, and by using common deception techniques (civilian air corridors, commercial callsigns), the Israelis can mount productive collection missions, relatively close to Iranian airspace.
But the new aircraft is not a panacea. Operating from safe corridors in the Persian Gulf or Arabian Sea, the Eitam will not be able to “see” everything of interest in Iran. And, there’s the chance that Iran might figure out operational patterns in those areas and eventually try an intercept mission, although deficiencies in Iran’s air defenses reduce prospects for success.
Israel also has the option of flying collection missions in the airspace of Turkey, its primary ally in the Muslim world. An orbit over southeastern Turkey would reduce risks for the Eitam crew, but limit the amount of Iranian territory that could be covered.
Today’s public display will serve two purposes, reassuring an increasingly nervous Israeli public, while sending a clear signal to Iran. The Eitam is no direct threat to Tehran’s nuclear program, but it highlights Israeli superiority in the realm of intelligence, surveillance and reconnaissance. Putting the aircraft on display, the Israelis are showing Iran they have another, advanced airborne platform for keeping tabs on their adversary's activities, a capability that Iran sorely lacks.
Posted by Unknown at 1:56 PM