A Death at Elmendorf 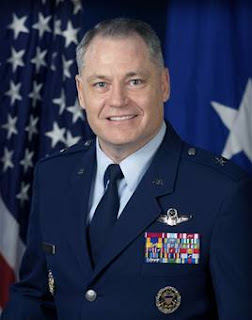 Brigadier General Thomas Tinsley, commander of the 3rd Wing at Elmendorf AFB. Tinsley died from a gunshot wound at his base residence on Sunday night (USAF photo).

The Air Force is investigating the death of Brigadier General Thomas Tinsley, commander of the 3rd Wing at Elemendorf AFB, Alaska.
According to a statement released by the service, Tinsley died from a gunshot wound. He was declared dead around 10:30 last night at his residence on the base, which is located on the eastern side of Anchorage.
Elmendorf medical personnel responded to the scene, according to public affairs officials. Their statement provided no additional details on incident, and whether Tinsley's death was an accident or a suicide.
General Tinsley returned to Elmendorf in May 2007 to take command of the 3rd Wing, the Air Force's second F-22 unit. A veteran F-15 and F-22 pilot, Tinsley previously served as commander of the 12th Fighter Squadron at the Alaskan base; commander of the 1st Operations Group at Langley AFB, Virginia, and as executive officer to the former Air Force Chief of Staff, General T. Michael Moseley.
A career fighter pilot, Tinsley's career was clearly on the fast track at the time of his death. Leadership of the 3rd Wing is considered a plum assignment, and his past tour as Moseley's executive officer suggested that Tinsley was destined for even greater responsibilities as a flag officer.
But all of that came to a sudden end last night, with a fatal gunshot in the wing commander's residence. While the investigation is continuing, it will raise inevitable questions about the general's mental condition, and his access to special access programs relating to the capabilities of the F-22.
Pilots and other personnel who work with the low-observable aircraft are "read in" or given access to the most secret details of the F-22. Clearance for those programs are based on additional background checks, beyond those required for a Top Secret/Sensitive Compartmentalized Information (TS/SCI) security clearance.
If Tinsley's death is ruled a suicide, it will also raise concerns about the Air Force's vaunted "wingman" program. While the service's suicide rate is below that of the general population, suicide remains a leading killer of Air Force personnel. After a rash of suicides several years ago, the service launched the wingman effort, to identify aimen who were under severe stress and might harm themselves.
As its name implies, the program is based on the time-honored concept of experienced pilots looking out for the junior flyers on their wing--and vice-versa. For troubled airmen, the wingman effort stresses observation and intervention, rooted in a "culture of commitment."
The wingman program (and other efforts) are widely credited with a short-term drop in suicides among Air Force members. One year after the wingman initiative began, the service's suicide rate dropped by almost 50%, from 15.2 per 100,00 airmen in 2004, to 7.8 in 2005.
However, the USAF's suicide rose again in 2006, reaching 11.4 deaths per 100,000 airmen. The increase was largely blamed on more frequent deployments and increased operations tempo, although statistics show that over half of all Air Force members have never served in Iraq or Afghanistan.
Capt. Kelley Jeter, a spokeswoman for the 3rd Wing, described Tinsley as a charismatic leader who had the ability to make a lengthy briefing "feel like it only lasted 10 minutes."
During a presentation last Thursday, Tinsley "lit up the room by conveying his love for the wing," Jeter said.
***
UPDATE/According to the Anchorage Daily News, the Air Force has confirmed that Tinsley died from a self-inflicted gunshot to the chest. It has not been determined if the shooting was accidental or a suicide.
Posted by Unknown at 1:27 PM

I think it is worth noting that the suicide prevention programs are generally not aimed at officers, especially those holding such high rank. It would be very difficult for someone of such high profile so seek assistance within the military medical system. Help may be accessible but not without bias. These officers are expected to identify those at risk and never be vulnerable themselves. He held a very high profile and stressfull position. From what I understand he was a very honorable, fair, and gifted officer yet still a human being. I am still hoping it was some sort of accident.

The exterior presented is not always what exists underneath. Not to jump to conclusions, however, he was the AF Executive Officer to the former Chief of Staff of the Air Force, who was forced to resign.

Suicide program or not, there is no excuse for suicide, even under immense stress it is a coward's method of escaping reality. We shall see what the investigation reveals.

The base is in Anchorage not "just outside of Anchorage". Commanders live on base, located on the eastern side ot town.

Apparently those who have commented have never been faced with a situation that has led them to consider taking their lives. Perhaps they might think of respecting General Tinsley instead of calling him a coward.

I seriously doubt that depression presents a security risk. It is an extremely difficult struggle for those in its grip, and unless you've been there you really can't judge.

I am tempted to wish guest a long and financially as well as mentally and physically debilitating death so that he can display his courage for us all.

There is a terrible conflict with military medicine and suicide prevention.

Once you get tagged by a military shrink, you lose access to special programs and they start talking about kicking you out of the military. The shrink has a dual loyalty: the patient and the military.

I know, it happened to me.

Now suicide prevention is a CBT done on the computer. It is just being done to check a box now. I suspect the numbers will continue to go up.

Anonymous said...
This comment has been removed by a blog administrator.
1:33 AM

Don't people normally put a handgun in their mouth though? I suspect he was cleaning his weapon or foul play. That CBT is infallibile.