A New Home for an Old Warrior 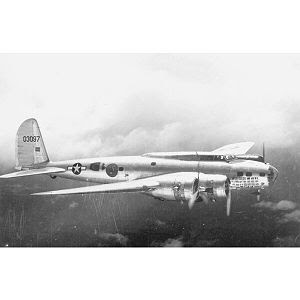 "The Swoose," in bare-metal finish, circa 1944. The last of the early-model B-17Ds, The Swoose was recently moved to the National Museum of the U.S. Air Force, where it is slated for an extensive restoration (Wikipedia photo).

Despite the passage of time, you can still find surviving aircraft from World War II. Virtually all of them are in the hands of private collectors, or in museums. Some are still airworthy, but most spend their retirement years on the ground, carefully preserved for future generations.
Most of the old warplanes—at least those of American design--share something else in common. They were built after the United States entered the Second World War, during that remarkable industrial surge that produced over 200,000 combat aircraft in a five-year period.
To put that effort in perspective, consider these statistics: in 1940, America produced only 1,700 combat planes of all types; within three years, U.S. manufacturers were building 9,000 bombers a year, along with 44,000 other combat aircraft. When production reached its peak in 1944, American factories were churning out over 100,000 military aircraft a year, including those built for our allies.
That’s one reason “The Swoose,” is so special. Now being reassembled at the National Museum of the U.S. Air Force, located at Wright-Patterson AFB, Ohio, “The Swoose” is not only the oldest B-17 in existence; it is also the last “D” model Flying Fortress, with its distinctive “shark fin” tail. Additionally, the bomber has the distinction of being the last surviving aircraft from the earliest days of combat in the south Pacific.
On December 8, 1941, the B-17, then nicknamed “Ole Betsy,” was part of the 19th Bombardment Group, stationed at Clark Field in the Philippines. Somehow, Ole Betsy and her crew survived the initial raid by Japanese forces that wiped out half of the U.S. bomber force in the Far East. Over the weeks that followed, the B-17 struck back at the advancing Japanese, operating from bases in the Philippines, Java and Australia.
Along the way, the bomber earned its more lasting nickname, after a combat encounter with Japanese Zeros. Sarah Parke of the Air Force Museum's public affairs staff describes the transformation:
In January 1942, during a bombing mission, enemy fighters damaged Old Betsy. The aircraft was repaired and overhauled with a replacement tail and engines from other B-17s, and a makeshift tail gun was added. Its pilot gave it a new nickname after a popular song of the time about a bird that was half-swan, half-goose --The Swoose.
Later, Gen. George Brett, commander of Allied air forces in the Southwest Pacific, used The Swoose as his personal aircraft to visit forward air bases in the combat zone. On some of these flights, the crew had to man the guns to fend off enemy attack. After it returned to the United States, it received additional modifications and served as a high-speed transport until the end of the war. Its operational retirement marked its service for the entire duration of World War II.
After the war, The Swoose escaped the scrap heap and eventually became part of the vast holdings of the Smithsonian’s National Air and Space Museum in Washington. But, as part of a “bomber” swap, the Smithsonian agreed to transfer the vintage plane to the Air Force Museum, where it will be displayed with the legendary “Memphis Belle,” flown by the first B-17 crew to complete their combat tour in Europe.
A third “Flying Fortress,” nicknamed “Shoo Shoo Baby” will complete the deal, eventually moving from Ohio to the Smithsonian’s air and space museum annex at Dulles Airport near Washington, D.C. That transfer will occur when “Memphis Belle” goes on permanent display at Wright-Patterson.
Both the F-model “Memphis Belle” and “Shoo Shoo Baby” (a B-17G) are newer aircraft, having entered the Air Corps inventory in 1942 and 1944, respectively. Memphis Belle is currently undergoing an extensive restoration at the Air Force museum, repairing the neglect and vandalism caused by years of careless display in the city that helped inspire its name.
Curators say it may take a decade to fully restore the Memphis Belle, which arrived at the Air Force Museum in 2005. While “The Swoose” is in slightly better condition, it will also require extensive restoration before going on display.
Until then, visitors to the museum can see the B-17s in the facility's restoration complex, during a “behind-the-scenes” tour offered every Friday. If you’re in the Dayton area on a Friday, it’s well worth the time.
***
ADDENDUM: As aviation buffs know, many World War II aircraft were named for wives or sweethearts; "Memphis Belle" was inspired by the girlfriend of the B-17's pilot, Captain Robert Morgan, who met her in the Bluff City. However, "The Swoose" is one of the few bombers--or any aircraft--that provided a name for a human being. Colonel Frank Kurtz, who flew the B-17 during the war, later named his daughter after the Flying Fortress. You know her as actress Swoosie Kurtz.
It's also worth noting that The Swoose was never actually on display at the National Air and Space Museum. Before its transfer to Wright-Patterson, the B-17D sat, disassembled, for more than 40 years, in various storage facilities belonging to the Smithsonian.
Posted by Unknown at 4:45 PM

Man, two things I love in one: history and airplanes. That is a too-cool story, worthy of passing on.
Thanks!