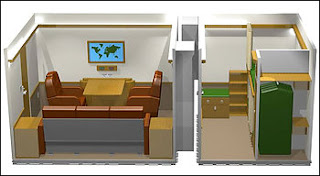 
At the very time it doesn’t need one, the Air Force has managed to earn another black eye.
After the recent firings of senior leaders, nuclear accountability issues and a series of scandals involving high-ranking personnel, the Air Force is now under scrutiny for spending millions on “luxury pods” for VIP travelers.
The program is detailed in today’s Washington Post, which says the service originally planned to buy 10 of the capsules, which consist of two adjoining rooms, measuring 18 x 9 feet. The capsules can be mounted in the cargo bay of large transport aircraft, allowing senior officers and civilian officials to travel in comfort.
According to the Post, the pod program has since been downsized. The Air Force is now planning to buy three of the capsules, plus four pallets fitted with swiveling leather chairs, at a cost of $7.6 million. In typical military fashion, the VIP accommodations come with their own alphabetized designations; the pods carry the unfortunate acronym of SLICC (Senior Leader Intra-transit Comfort Capsules), while the smaller pallets are known as SLIPs (Senior Leader Intra-Transit Pallets).
Air Force officials say the pod and pallet program dates from a 2006 decision by General Duncan McNabb, then Commander of Air Mobility Command (AMC), which runs the Air Force transport fleet. With the service hauling more VIPs, McNabb determined that existing seats were inadequate for senior military and civilian officials.
And, to a minor degree, McNabb may have a point. Most transport planes are equipped with “troop seats,” canvas and metal contraptions mounted on the sides of airlifters like the C-130 or C-17. Almost anyone who’s every participated in a military exercise or real-world contingency can tell you horror stories about spending hours sandwiched in a troop seat, sharing the cargo bay (always too hot or too cold) with equipment or pallets.
Along with the Spartan troop seats, the USAF also has a number of older “comfort pallets” that can be mounted in the back of a transport. Those pallets feature a small number of airline-style seats and a lavatory similar to those found on commercial jets. The Air Force’s largest airlifter, the C-5 Galaxy, also has a limited number of permanently-mounted airline seats, found in “troop decks” behind the cockpit, and in the tail of the aircraft.
Unfortunately, the effort to build new SLICCs and SLIPs quickly became a matter of luxury. In various e-mails and memorandum obtained by the Post, senior Air Force officers talk about the need to provide “world class” accommodations, exceeding found in “business class” on the major airlines.
At one point, the service even requested that terrorism funds be used to complete the capsules, which had gone over-budget. While Congress rejected two requests to dip into the terrorism budget, the USAF eventually used $331,000 from that source to help pay for the pods and pallets. An Air Force official now tells the Post that decision will be reversed.
At least four Air Force generals took an active role in the project, providing input on such matters as color of the seats, and the inclusion of side pockets on the chairs. Adding the pockets and changing the seat color from blue to brown reportedly added another $68,000 to the cost of the project, according to one budget document.
General McNabb, who got the pod project rolling, subsequently served as the Air Force Vice Chief of Staff. Last month, he was nominated as Commander of U.S. Transportation Command at Scott AFB, Illinois. He will replace General Norton Schwartz, who has been designated as the next Air Force Chief of Staff.
While the Post article is clearly an embarrassment for the Air Force, there are some missing elements. First of all, what inspired General McNabb to initiate the pod and pallet effort? Was it one of those four-star epiphanies, or did someone tell the USAF that its existing accommodations weren’t up to snuff? The Air Force spends a small fortune on VIP airlift every year, and spares no effort—or expense—to make the brass and politicians.
The Post also fails to report the number of times that current “luxury” pods have been used in support of Congressional junkets and other travel by senior officials. When Congressmen and Senators travel to Iraq or Afghanistan, they usually don’t ride in troop seats. While the pod and pallet program was clearly designed to support travel by flag officers and senior DoD civilians, it was also aimed at supporting Congressional excursions. Readers will note that Congress never told the Air Force to stop building the comfort pods, just don’t do it with GWOT money.
Of course, that doesn’t excuse the enterprise. The USAF already has two “silver bullet” trailers that are loaded onto transport jets for VIP visits to combat zones. Those should be adequate for travel by the highest-ranking officials. For everyone else, those existing comfort pallets should do. Let the brass, senior civilians, Congress members and their staff see “how the other half” lives, riding in old airline seats, eating a “box nasty” served by a grumpy loadmaster.
Or, if they really want adventure, they could try military transit at its finest: a seat on a charter flight to and from the war zone (hope you don’t mind sitting with Private Snuffy and 400 of his pals). Then, there's the ultimate AMC flying experience, wedged into a troop seat on a C-17, hauling MRAPs to Iraq. When your bottom turns numb, you can always stretch out on top of a cargo pallet (or beneath a vehicle), with a field jacket for cover.
Figure it this way: if the military brass, senior DoD civilians and political officials had to travel "like the rest of the armed forces," we could save billions on VIP airlift.
Posted by George Smiley at 4:21 PM

I at one time was additional dutied to be a 10K forlift driver for the deployment control center at a base...

That pallet would be the ideal thing to loose control of my tangs on.. What a waste. I am very happy to be retired.. but saddened to see what the USAF has done in the last few years

Or better yet, the Air Force should require every DV flight to give up all of its empty seats to Space-A passengers. Why shouldn't they have to mingle with actual military members and their families and retirees (you know, actual voters and taxpayers...).

Anonymous said...
This comment has been removed by a blog administrator.
2:24 AM