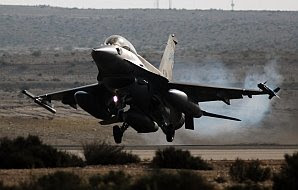 You might be interested in the posting I did on my new blog, Island Turtle, about a possible reason for the movement of the only carrier in the region, the Abraham Lincoln, out of the Persian Gulf into the Gulf of Oman.

I don't think the Navy wants a carrier trapped in the Gulf if hostilies begin agains Iran.

OPEC cannot make up for Iranian oil. How does Bush expect to avoid an oil price jump?

You would think that the name Haditha would ring a bell with the media and call for stringent fact checking. But then the narrative is right. Anything to cause defeat even at this late date. Their last gasp so to speak.

Big Lizards has a post up about the solution of OPEC's statement. Very interesting if the government would implement it.

"the 'problem' of forward basing for an Iran strike had already been solved."

The most likely location for Israeli FOBs is inside Iran. Yes the Iranians won't like it, no they won't be able to do much about it.

The Israelis capture an airfield inside Iran. It already has fuel for them. It's located near the sea. They pre-position cargo ships containing materiel in the area. They ferry the materiel to the airfield.

Bomb, bomb, bomb, the hell out of Iran for a week or so from this airfield located close to the targets. Then withdraw.

Kurdistan or Baluchistan might work too but the FOB will be close to the targets.

This is contrary to Spook's prediction that the Israeli attack will be small.

utopia parkway - if the Israelis captured an Iranian airfield, what's to stop the Iranians bombarding it with hundreds of missiles? Under the circumstances they'd probably be willing to fire everything they had at it.

An airbase in Iran would be far too difficult to defend, and the need to capture it with its facilities intact would add a huge extra risk to the mission.

They will just use Turkey like they did for the attack in Syria.

The same can be said for any FOB, whether it's in Syria, Turkey, Iraq or Iran.

IMO, a successful attack against Iran's nuclear targets will have to hit and damage if not destroy several dozen hardened targets. That means dropping lots of ordnance and I don't see how Israel can do that from bases in Israel. Israel does have its own missiles which could be used but I still think that hundreds of sorties will have to be flown. I can see this only happening from an (temporary) FOB close to the targets.

In order to have continuing operations of this kind Israel would need air superiority over Iran and also large amounts of ordnance and other materiel. Conceivably it could be ferried in on cargo planes but cargo ships would seem to have much greater capacity. If Israel could bring in 50 - 100 modern jets they could most likely gain air superiority.

If there were an airbase that was protected by natural terrain, mountains, rivers and so on then it's possible that it could be held for a few days to a week while Israeli jets attacked targets only hundreds of miles away rather than thousands would allow for much greater destruction.

How many military bases were hit by HB rockets during the 2006 war? I think the answer is few or none. I'm not at all convinced that Iran can hit the broad side of a barn with their rockets. They are mostly a terror weapon that works against civilian targets, if they work at all.

This all assumes that Israel wishes to attack Iran's nuclear targets. If instead they decided to hit economic targets then things become simpler. An attack on Iran's oil refineries, oil pipelines and perhaps power stations could push the Iranian economy over the edge so far that the rulers would be thrown out of power. These targets are soft and might make a small air attack useful.

utopia parkway - you should assume that the Iranian forces would be able to direct their weapons more effectively than Hezbollah, since (a) some of the weapons would be guided missiles rather than unguided rockets, and (b) they would all be aiming at a single target.

Imagine that Israel captured an Iranian airfield. It would have to fly-in a large number of ABMs to defend against missile attack, and base a significant number of aircraft there to attack the Iranian missile launch sites, in addition to the aircraft that were attacking Iran's nuclear facilities. Destroying the missile launchers would be a significant task, perhaps even more difficult than disabling the nuclear programme.

The Israelis would also have to bring in infantry to defend against ground attacks, and maintain fighter patrols to defend the ships and aircraft that were delivering supplies to the base.

While the IDF was doing all this, the Iranians would undoubtedly order Hezbollah to mount a full-scale attack on Israel. When so many aircraft and ABM systems had already been sent to Iran, the only way to deal with this attack would be for the IDF to invade southern Lebanon with minimal air support to the ground troops. That's not a good situation.

What if Syria then joins the attack? The Syrians might be deterred by the threat of nuclear retaliation, but if they weren't then the Israelis would have to nuke them for want of any other option.

Basically, your scenario includes so many risks of failure and risks of uncontrolled escalation that it is very very unlikely that the Israelis would attempt anything so reckless.

Most of the risks you mention will be incurred with any Israeli attack on Iran. If Israel could use an FOB in Turkey or Iraq that would be better than using one inside Iran. However, any base in Turkey or Iraq would also be susceptible to missile attack of the kind you mention. Obviously the farther it is from Iran the more immune it would be to any ground attack or missile attack. But also the farther it will be from the targets.

A problem with using an FOB in Turkey or Iraq is political fallout from aiding Israel in its attack. Maybe the Turks or the Iraqis won't care about that. Hard to say. FOB inside Iran finesses this problem.

If you hear about Israeli pilots practicing carrier landings that might change things ;-)

The risks of HB and Syria attacking Israel will come with any Israeli action, and exist even with no Israeli action. There is a risk of nuclear escalation in any military engagement between Israel and Syria. Not only if Israel is losing but also if they are winning. If Israel is winning against Syria, the Syrians will consider using chemical weapons against Israeli civilian targets in a last ditch effort. If they do that then Israel will consider going nuclear. I think there's a high likelihood that if the Syrians used chemical weapons against Israeli civilian targets then Israel would mount a nuclear response. I assume the Syrians know this, the Israelis know this, and anyone who's thought much about it knows this.

It's curious that the Syrian response to an Israeli bombing raid on sovereign Syrian territory last year resulted only in bluster from the Syrians, and not much of that. Will they really attack Israel just because Iran says so? They have a lot to lose. HB is in a similar situation. They also have a lot to lose.

I would expect that if Israel mounted a large attack against Iran they would also call up their reserves. HB does not want tens of thousands of Israeli soldiers coming over their border, regardless of their bravado.

There are risks with any attack. I think that a small attack incurs the risk of not having a useful result in addition to incurring retaliation. I don't see how destruction of Iran's nuclear targets can be gained without a large attack and I don't see how a large attack can be mounted from bases in Israel. If the Israelis do attack Iran it will be because they consider Iran an existential threat and because they think that no one else will stop Iran. They will need to take risks in order to succeed.