What Happened in the Strait? 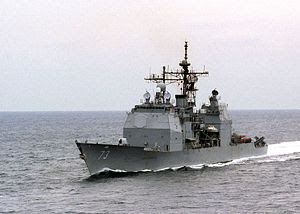 The USS Port Royal (CG-73), one of three U.S. naval vessels involved in a confrontation with Iranian gunboats in the Strait of Hormuz on Sunday morning (Wikipedia photo)

UPDATE//1441 EST//Two Navy F/A-18s collided in mid-air over the Persian Gulf today. The commander of the U.S. 5th fleet, Vice Admiral Kevin Cosgriff said three pilots were rescued after ejecting from their crippled aircraft. Admiral Cosgriff said all three and in good condition, and had returned to the carrier they were operating from, the USS Harry Truman. One of the jets was carrying a two-man crew, while the other was flown by a single pilot.
The incident occurred far away from the site of Sunday's confrontation between U.S. ships and Iranian gunboats and (obviously) there no connection between that incident and today's mid-air collison. However, the kook fringe at the Democratic Underground has already likened the Strait of Hormuz standoff the the Gulf of Tonkin incident; give them a few hours, and they'll probably find a way to work the crash into their latest conspiracy theory.
(H/T: Michelle Malkin--for being the first to spot the Gulf of Tonkin comparison)
***
UPDATE//1245EST//InformationDissemination and Fox News report that the ships involved were the USS Port Royal (CG 73), USS Hopper (DDG 70), and USS Ingraham (FFG 61) attached to the Tarawa Strike Group. The vessels were transiting the strait, enroute to Iraqi oil terminals in the northern Gulf. As Galrahn notes, elements of the Truman carrier battle ground had been protecting those facilities on a temporary basis, following the departure of the Kearsarge strike group last week. Those duties were passed to the Port Royal and its sister ships after they arrived on station.

U.S. military officials said the incident occurred Saturday night in the Strait of Hormuz, a narrow shipping channel leading in and out of the Persian Gulf.

The five Iranian ships made "threatening" moves -- in one case coming within 200 yards of a U.S. ship, the U.S. officials said.

In one radio transmission, the Iranians told the U.S. Navy: "I am coming at you. You will explode in a couple of minutes," the U.S. military officials told CNN.

When the U.S. ships heard that radio transmission, they manned their gun positions and officers were "in the process" of giving the order to fire when the Iranians abruptly turned away, the U.S. officials said.

No shots were fired and no one was injured in the confrontation.

One of the Iranian ships had been dropping white boxes into the water in front of the U.S. ships, the officials told CNN.

The Pentagon has not disclosed the names of the U.S. ships involved in the incident. As noted in the CNN account, the IRGC has assumed control of Iranian naval operations in the Persian Gulf, following a trend noted throughout Tehran's military.

Over the past 20 years, the IRGC has gained a greater share of Iran's defense budget, and receives the newest hardware, while the regular military--often viewed as politically unreliable--still operates 1970s-era western equipment. The IRGC is now in charge of Iran's ballistic missile force, its more modern air defenses (including SA-6 and SA-15) units, and its latest aircraft.

Given those trends, it's no surprise that Tehran has given the IRGC control of naval operations in the Strait of Hormuz. And that will increase the chances for similar incidents in the future. While Iran's "regular" Navy has often been professional in its operations (and even cooperative in resolving maritime issues), the IRGC is a completely different breed. In other words, the zealots and crazies are now in charge of Iran's naval ops in one of the world's most important waterways. Not a good sign, to say the least.

Despite the news from the Persian Gulf, crude oil prices have been on a slight downward track this morning. That suggests that (a) the market hasn't fully absorbed the news, or (b) they're dismissing the event as an isolated incident.

CNN is reporting that five Iranian Revolutionary Guard Corps (IRGC) small boats "harassed" and "provoked" three U.S. Navy warships in the Strait of Hormuz on Saturday. No details yet.

And, there's no word on which Navy vessels were involved in the incident. However, Galrahn at InformationDissemination does a great job in tracking vessels deployed to the Gulf region. As of last Friday, he listed the following ships in the 5th Fleet's Area of Responsibility; his listing includes U.S., British, French, German and Australian vessels.

Order of Battle in the 5th Fleet Area of Responsibility.

The Iranian Navy, or more specifically, IRGC naval forces, have carried out harassment operations in the past. While details of Saturday's incident remain sketchy, it does not sound like a rehearsal of the "swarm" tactics that IRGC forces would use against western naval forces in an actual conflict.

Utilizing that approach, dozens of small craft--some as small a jet skis--would attempt to engage western combatants at close range--inside the effective range of the vessels' major weapons systems--using everything from RPGs to mines. The swarm attack could also provide cover for strikes by other weapons, including C-802 anti-ship missiles launched by shore batteries or aircraft. By damaging (or sinking) major naval combatants or support vessels, the Iranians believe they can close the Strait of Hormuz, effectively shutting off much of the world's oil supply.

Word of the incident in the Strait came only days after a reported decrease in the flow of weapons from Iran, to insurgents in Iraq. But, with release of the recent U.S. National Intelligence Estimate on Iran's nuclear program (and perceptions that an American military strike is less likely), elements of Iran's defense establishment may feel emboldened, and willing to test the reactions of U.S. forces in the region.
Posted by Unknown at 9:13 AM

It is going to be very interesting to learn which 3 ships. Arab media reported the Truman moved into the Gulf this weekend.

The perception will be very different if it turns out the Truman was one of the 3 ships involved in this incident.

It should be noted, it could have easily been the Tarawa as well. Strike group deployment organization over the past few years has broken the total force down into a 3 ship group for the HVU of a strike group in the 5th Fleet. Usually that means the primary HVU and 1-2 DDG escorts for the LHA/LHD, or 1 CV and 1 DDG for the CVN.

"When the U.S. ships heard that radio transmission, they manned their gun positions and officers were "in the process" of giving the order to fire when the Iranians abruptly turned away, the U.S. officials said."

They heard the transmission before manning the weapons. Sounds like someone dropped the ball.

I'm in a room full of ex-navy guys, and nobody is buying that aspect of the story. Sounds to us like a writer playing loose with the details.

Fox is reporting the ship types, which implies they are the USS Port Royal (CG 73), USS Hopper (DDG 70), and USS Ingraham (FFG 61) attached to the Tarawa Strike Group.

I'm on the HST (Truman). I can assure all reading it was not us that was harrassed. It was elements of the Tarawa ESG. We have been rehashing the incident in detail all morning on SIPR CHAT.

If you do not know what an ESG or SIPR CHAT is then you will probably not be able to assertain if I'm really ship's company or not...but I digress.