If You Doubt the MANPAD SAM Threat... 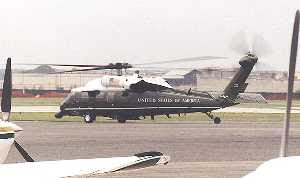 A VH-60N, which carries the "Marine One" callsign when the President is onboard.
...Take a look at this article, posted a short time ago at the WorldTribune.com:
"Bush travel plans in Israel changed at last minute due to missile threat"
TEL AVIV — The United States revised travel plans by President George Bush because of the threat of a Palestinian missile attack.
Israeli sources said the U.S. Secret Service canceled Bush's plans to travel by helicopter from Ben-Gurion Airport to Jerusalem on Wednesday. The sources said the Secret Service determined that Bush's helicopter could be targeted by an attacker with a surface-to-air missile.
"There was an intense last-minute discussion about the possibility of a SAM attack," an Israeli source said. "When the Israeli side agreed that this could not be ruled out, the Secret Service decided to cancel the helicopter flight."
[snip]
The Secret Service assessment marked a departure from an earlier CIA report that Palestinians in the West Bank could not threaten Ben-Gurion airport with SAMs. The CIA assessment was issued in 2005 during talks with Israel on plans to build a security barrier some five kilometers into the West Bank, located adjacent to the airport.
All choppers assigned to Marine Helicopter Squadron One (which provides transport for the President and other senior government officials) are equipped with an advanced self-protection system, designed for the MANPAD threat. The helicopters assigned to Mr. Bush's Middle East trip are capable of handling the threat that might exist in the West Bank--mostly Soviet-era SA-7s/14s/16s.
Still, the White House and the Secret Service can't afford the image of Marine One maneuvering against a potshot from some Palestinian gunner, particularly in light of recent Al Qaida threats against Mr. Bush. So, the decision to cancel the president's chopper flight was a prudent one, even if it cause severe traffic problems for Israeli commuters.
Today's decision provides another reminder of the growing MANPAD threat to VIP and civilian aircraft. As we noted in a recent post, older shoulder-fired SAMS are readily available on the arms market, sometimes for only a few hundred dollars. More advanced MANPADS can also be acquired, at prices up to $100,000. That's a relatively cheap price, considering the economic--and political--damage that could be inflicted with a single, successful MANPAD attack.
The same missiles available in the West Bank, Gaza (and elsewhere in the Middle East) could be easily smuggled into the United States. That's why the cancellation of Mr. Bush's helicopter ride should re-ignite the debate on self-defense systems for U.S. commercial jets. The Department of Homeland Security will mount defensive gear on three American Airlines jets this spring, part of a test to determine maintenance and fuel costs. Installing anti-missile suites on most commercial jets is still years away--and the airlines are fighting the proposal.
Mr. Bush's last-minute change in transportation plans should serve as a wake-up call for domestic security officials and U.S. air carriers. The threat that forced the president to travel to Jerusalem by car--rather than helicopter--will arrive on our shores, and sooner, rather than later. Actively preparing for that eventuality (by installing defensive systems on commercial aircraft) cannot wait until the first jetliner goes down in flames.
Posted by Unknown at 12:59 PM

I have one thing to say to airline companies dragging their feet on missile defense: Don't be so bloody stupid.