A few weeks ago, The New York Times published a lengthy, multi-page article that detailed a string of murders committed by military veterans returning from Iraq and Afghanistan. Predictably, the Times pulled out all the stops, interviewing victims’ families, law enforcement officials and veterans accused of the crimes. The implication of their “reporting” was clear: the stress of combat in the Middle East has transformed large numbers of military personnel into crazed murderers.

But the Times (conveniently) ignored a rather important comparison. They failed to compare their data with murder rates for the general population, and for the demographic group that includes most returning service members. When that comparison is made, the impact of the NYT article fades; despite the stresses of frequent deployments and combat, the murder rate for returning vets is well below the average for their civilian peers. So much for that “veterans killing spree.”

Not to be outdone, the Washington Post weighs in today, with a lengthy piece on increased suicide rates among members of the U.S. Army. Citing Army statistics, the WaPo reports that the number of solider suicides almost doubled over a four-year period, as more troops entered combat in the Middle East. According to the accompanying graphic, there were 70 suicides among soldiers in 2002; four years later, the number reached 121—if you include 32 deaths that are “pending confirmation” as suicides.


To “personalize” the problem, Post staff writer Dana Priest profiles Lt Elizabeth Whiteside, an Army reservist who has been a psychiatric outpatient at Walter Reed Medical Center since early 2007, after suffering a mental breakdown in Iraq. During that episode, the pointed a gun at a superior, fired two shots into a ceiling, then turned the weapon on herself.

Earlier this week, Lieutenant Whiteside again tried to end her life, taking an overdose of pills. Friends and family members said she was worried about a potential court-martial on charges of threatening a fellow soldier, stemming from the incident in Iraq. After her latest suicide attempt, Whiteside learned that the charges against her had been dropped.


Priest’s reporting notes that the Army was unprepared for the recent surge of suicides and self-injuries. But, like his rivals at the Times, she never puts the numbers in any sort of meaningful statistical context, despite the fact that such data is readily available.

Consider the Army’s reported suicide rate; at 17.5 deaths per 100,000 soldiers, it seems staggering. But how does it compare to the general population? Readers of the Post won’t know the answer to that question, unless they do a little digging.

The numbers are relatively easy to come by, and they are revealing. Even a cursory look at the figures underscores what mental health professionals have long known: the risk of suicide is far higher among certain demographic groups, most notably middle-aged white men and the elderly. A graphic from the National Institute of Mental Health summarizes data from the year 2000: 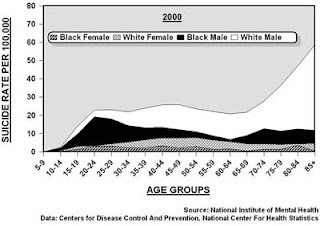 As indicated by the chart, suicide rates are highest among white males, the largest segment of the U.S. Army. And, even at the current “elevated” rate, suicide totals for soldiers are comparable to their civilian peers, and in some cases, notably lower. The Post doesn’t provide a demographic breakout of soldiers who attempted suicide, but anecdotal evidence suggests that most are white and relative newcomers to the Army, with many serving their first enlistment.

If that “profile” is accurate, then suicide rates for young soldiers are in line with the general population, and totals for older troops (between ages 30-45) are probably well below the national average. And that’s despite the rigors of constant deployments, which have sent many troops on multiple combat tours since 2003. We should also note that there has been a decline in suicide rates for many demographic groups since the late 1990s, but the reported Army rates are still in line with comparable segments of the civilian population.

The Post also fails to explore another interesting comparison that’s evident in the Army chart. While the suicide rate for soldiers has increased dramatically in recent years, suicide and self-injury totals for the Marine Corps have climbed only slightly. And no one can argue that Marine units haven’t seen their share of combat in Iraq and Afghanistan. Why has the Corps been more effective in dealing with the problem? Better discipline? Better mental heath resources for Marines? The Post never explains.

The reasoning behind those oversights is clear enough. As with the NYT piece on “veterans who kill,” the WaPo article on Army suicides loses its edge when you place the numbers in their appropriate context. Reporting that Army suicide rates are often comparable to civilian averages—and in some cases, well below them—doesn’t make a very good front-page story.

Clearly, recent suicides and self-injuries among soldiers are a cause for concern—and there’s clearly a need for more resources to help troops that might harm themselves. But, in reporting the problem, the Post also needs to provide valid, statistical comparisons and avoid sensationalizing the issue. What a novel concept.

ADDENDUM: Here’s another bit of information that Mr. Priest ignored. The Army’s reported suicide rate for 2006 (17.5 per 100,000 soldiers) is far below the averages for many European nations, including those with strict gun-control laws. A complete list, compiled by the World Health Organization (WHO) can be found here.

Gateway Pundit pokes another pin in Ms. Priest's "expose." Using other, readily available data, Gateway found that more military personnel committed suicide when Bill Clinton was in office than during the Bush presidency--another fact somehow omitted from the WaPo account.

And Ms. Priest is a Pulitzer Prize winner. Give me a break.
Posted by Unknown at 11:30 AM

There is another possibility. It is always possible that the existence of war caused men to enlist who were suicide prone, either looking to die (somewhat like "suicide by cop"), or looking to war to somehow turn their life around, but then committing suicide when it doesn't. (Somewhat analogous to the suicide rate among women who have plastic surgery.) The turn-around theory might account for the difference between the Marines and the Army. The individuals might consider the Marines too high cost a way of achieving their end.

Statistical inference is tough, even for trained researchers. I suspect the skills are not part of the toolkit of all but a handful of reporters. Reporters, after all, succeed on the basis of their literacy, not their numeracy.

Maybe the Times should be reporting on why the VA is refusing to help veterns fill out thier paperwork to receive the proper benefits. Or why therapists working for the US government are preasured to down-play p.t.s.d. even when a patient shows all of the symptoms. These are issues that I would like to hear about.

A less substantial point: Dana is a woman.

Michael--My mistake; for some reason, I was thinking of Dana Milbank as I typed.

Just wanted to say thanks. I always find your articles to be insightful and informative. As soon as I saw that piece on the suicide rate, my BS meter pegged. I knew I could come here and get the real story, or non-story as it turns out.

As I recall, the same trick was tried with Vietnam era vets. The problem with the argument was that those troops actually doing the fighting did not have an increase in the suicide rate.

The Lt. referred to in the article was support staff. Did she have any problems in civilain life?

"Statistical inference is tough, even for trained researchers. I suspect the skills are not part of the toolkit of all but a handful of reporters. Reporters, after all, succeed on the basis of their literacy, not their numeracy."

Sorry. It is not a matter of statistical inference. It is a matter of being objective and doing a little more research before publishing a half finished
article.

Then again, the conspiracy nut in me suggests that, they might have done the research and left out the results because the results did not fit the carefully composed narrative.

spook, at least one intrepid blogger is attempting to shine a light on a similar problem.

Support the Media Violence Project. It's a moral imperative.