Still on the Trail 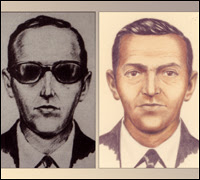 Have you seen this man? The FBI's Seattle field office is (still) looking for D.B. Cooper, the airline hijacker who vanished--and, most likely, died--36 years ago. A better question is why the FBI is still on his trail, given the bureau's more pressing duties in battling terrorism and cybercrime (FBI photo via the Danger Room).

Noah Shachtman at the Danger Room summed it up well a couple of days ago: terrorists must be rejoicing, he surmised, because the FBI is still looking for D.B. Cooper, wasting precious resources that might otherwise be used on (shall we say) more pressing threats.

Cooper, you'll recall was the hijacker who commandeered a Northwest Orient passenger jet on a flight from Portland, Oregon to Seattle on 24 November 1971. Passing a note to a stewardess, Cooper requested $200,000 in unmarked bills and four parachutes, threatening to blow up the plane (a Boeing 727) if his demands weren't met. Northwest Orient and the FBI decided to cooperate with Cooper. When the flight landed in Seattle, the money and parachutes were placed on the jet, while other passengers were allowed to exit.

Airborne once again, Cooper instructed the pilots to fly a southeasterly heading--in the direction of Reno, Nevada--at the relatively low altitude of 10,000 feet and a speed of only 170 knots. After ordering the remaining flight attendant to the cockpit, Cooper apparently strapped on two parachutes and jumped from the 727's rear stairway. A light on the airliner's instrument panel indicated that the stairway was being lowered; seconds later, a rush of air--from decompression of the rear cabin--a "bump" from Cooper jumping off the rear steps--confirmed that the hijacker had left the aircraft.

As you know, Mr. Cooper--mostly likely, a pseudonym--hasn't been seen since. Some of his ransom money--a total of $5,800--washed up along the Columbia River in 1980, and was found by an eight-year-old boy. The whereabouts of Cooper (and the rest of the cash) remain a mystery.

And, most likely, the case will remain unsolved, unless some hiker or logger stumbles across some skeletal remains in southern Washington. Cooper jumped into a heavy rain storm, wearing ordinary street clothing--including a pair of loafers--while 200 mph winds buffeted the aircraft. Not surprisingly, the FBI has (finally) rescinded its theory that the hijacker was an experienced skydiver or former paratrooper. A trained parachutist would not jump under those conditions.

It has also been revealed that Cooper--or whoever he was--took along a dummy reserve chute, leaving behind a fully-functioning model. That reinforces the theory that Cooper was a skydiving neophyte, who jumped under terrible conditions, and into remote, rugged terrain that he was woefully unprepared for. Even the FBI admits there's a strong chance that Cooper didn't survive the jump, his landing, or attempts to reach safety.

So, why the renewed interest in the Cooper case? The highly-publicized, successful hijacking has always been something of an embarrassment to the FBI, and the agency would still like to get its man, nearly 40 years after the crime. The bureau has also obtained a DNA sample from the J.C. Penny tie that Cooper was wearing, and hopes that new publicity--and that hi-tech lead--may finally sove the mystery of what happened to the hijacker. In fact, the FBI's Seattle field office is officially re-igniting the Cooper case.

That strikes us an exceptionally bad idea, no matter how the bureau tries to rationalize it. We realize that the statute of limitations never expires on certain crimes. But with the threats now posed by terrorism, espionage and cybercrime (to name a few) you'd think the FBI has more important jobs than chasing the ghost of D.B. Cooper. As Noah Shachtman observes, Mr. Cooper is now pushing 80--assuming he's alive--and not much of a threat to hijack another plane, or extract more money from an airline. Meanwhile, there have been a number of high-profile terror cases in the Pacific Northwest in recent years. Every agent looking for Cooper means there's one less for other investigations.

Dogged persistence is one of the FBI's more admirable traits, but sometimes, even the G-men need to move on. Put the Cooper file back on the shelf, until that hiker or logger finds some weathered bones, a parachute, and thousands of dollars in unspent ransom money.
Posted by Unknown at 10:07 AM

Call D.B. Cooper the sesame seed under the denture plate of a doddering bureaucracy. An irritant that just won't go away without decisive action; in this case by leadership that says enough time wasted. Move along. But that one word sums it up. Leadership. Sigh.....

There was an article in NY Magazine awhile back on the case that had an interesting theory:

If they have DNA then they may be able to prove/disprove it.

Interesting that the FBI seems to be suffering from the same 'PC Blues' as the CIA. That is the hiring of 'diversfied' applicants. In times past, the criteria was Competence, Common sense, and Intelligence. Legalities are forcing mediocrity onto all aspects of the complex web of US beureaucrats. We are way Overlawyered. Mr Putin, would you be so kind as to advise us in this matter?