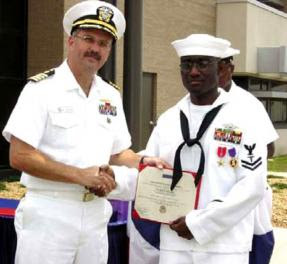 Navy Hospital Corpsman 2nd Class (FMF) Dontae Tazewell receives the Bronze Star and Purple Heart in a ceremony in Norfolk on 14 July 2006. A subsequent investigation revealed that Tazewell never earned those decorations and apparently forged the paperwork after returning from a Middle East deployment. Tazewell used the medals to earn a promotion to E-5 and avoid separation. He's now facing 24 months in the brig, demotion to E-1 and a bad conduct discharge (U.S. Navy photo via Navy Times)

Back in 2006, Navy Hospital Corpsman 2nd Class Dontae Lee Tazewell had a little problem. He failed an advancement exam and was facing discharge from the Navy, because he hadn't reached E-5 in the required eight years.
So, Tazewell devised a plan to get his needed promotion. Realizing that he would earn additional points for awards and decorations, Corpsman Tazewell forged paperwork that gave him a Bronze Star with “V,” Purple Heart, Combat Action Ribbon, Navy Unit Commendation Medal and various other medals, according to Navy Times.
He also concocted a story to explain his chestful of medals. Tazewell claimed that he rescued six Marines and recovered the bodies of four others after an ambush during the 2003 invasion of Iraq. In reality, Tazewell served at aid stations in Kuwait, and there's some question as to whether he actually set foot in Iraq.
Still. Tazewell's little con job worked for a while. Despite the fact that his medal paperwork was "almost wholly inconsistent with recognized standards," someone in the Navy chain bought his story. He was awarded the Purple Heart and Bronze Star at a ceremony at the Naval Hospital in Portsmouth, Virginia two years ago. Stories about his "exploits" appeared in the Portsmouth base newspaper and other military publications.
But his claims quickly unraveled. An investigation revealed that none of the corpsmen in Tazewell's unit saw combat. The phony medal citations and related forms were apparently created by Tazewell at his stateside assignment, a Navy clinic in Yorktown, Virginia.
Yesterday, a military judge in Norfolk convicted Tazewell on 10 counts of wearing unauthorized ribbons, and sentenced him to 24 months in the brig, reduction in grade to Seaman, and a bad conduct discharge upon his release. The judge, Navy Capt. Patricia Battin, dismissed the more serious charges of forging the medal paperwork.
In his arguments, Tazewell's military lawyer focused on his client's troubled childhood and recent health problems. Since returning from the Middle East, Tazewell has suffered from a gastric illness which required steriod treatments. The steroids caused severe bone damage, forcing Tazewell to undergo a double hip replacement last year.
"Petty Officer Tazewell, in serving his country, will not leave the Navy in the same condition he came in," argued his lawyer, Lt. Matthew Cutchen.
But prosecutors focused on Tazewell's criminal conduct. Lt Matthew Wooten, who handled the case for the government said "This is about a person who had a plan to con the U.S. Navy. He was never in combat, never even scratched."
Tazewell's conviction carries an automatic appeal, but its exceedingly doubtful that a military appeals court will overturn Thursday's decision, or approve a request for clemency. Having destroyed his military career, Tazewell will emerge from the brig in 2009 with the stigma of a bad conduct discharge, decreasing his chances for a meaningful civilian career.
We'd say Tazewell got what he deserved. And we'd also say the Navy did the right thing, by taking the case to a courts-martial, rather than pushing Tazewell out the door with some sort of administrative discharge. By making him an example, the Navy sent a clear message through the ranks: wearing medals you never earned is a criminal offense, and it can end your military career.
The other services should follow the Navy's example; Tazewell isn't the only service member wearing decorations that were never earned. Those phonies should also be exposed and receive the same sort of punishment.
Posted by Unknown at 9:09 AM

If only he would have worked as hard to pass his advancement exam as to he worked to get those phoney medals.

But, when he took those actions, he sounds to me like he's not very bright. Really, come on!!!- He didn't think that anyone would notice? And what about the people who bought his story?

As a Hospital Corpsman (who is getting ready to retire) this story is very disturbing. I've work with a few people that have been awarded both medals for putting their lives on the line - and this person now has called into question any Corpsman that may have been awarded these medals. He's lucky that his Courts Martial wasn't handled by the Marine Corps...

As for the Chain of Command...why did nobody stand up and question "the paperwork" (call his unit he was assinged to, etc...). Sounds like the person that bought off on his story should join him in the brig...