A Passing Worthy of Celebration 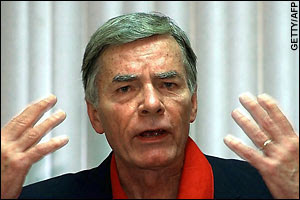 Rot in hell: Philip Agee, 1935-2008 (Getty image)
Virtually all spooks--active and retired--reserve a special contempt for those who betray their country, their profession and their colleagues. We can only hope that there's a special place in the celestial inferno for such traitors, with added suffering and damnation for exposing other operatives, a move that (in many cases) guarantees their death.
With that in mind, the recent passing of CIA turncoat Philip Agee is a cause for celebration--and the belief that a fitting, final judgment has been rendered. As Mr. Agree roasts on his own special spit--in the company of Philby, Burgess, MacLean and other traitors--he should be remembered as the man whose "expose" of CIA covert activities led to the execution of several agents and informants.

Intelligence officials quoted in his AP obituary grimly summarize Mr. Agee's post-agency career and the impact of those actions: he rendered grave damage to our national security and died with blood on his hands. And for that, Agee offered no apology.

Instead, the renegade ex-agent tried to justify his treason, claiming that he was repulsed by CIA operations in Central and South America, where he worked as a field agent in the 1950s and 60s. According to Agee, his Roman Catholic conscience persuaded him to leave the agency, and embark on a new career as a critic of both the CIA and its activities.

Toward that goal, Agree claimed it was necessary to expose the agency's operatives and informants. "It was not enough simply to describe what the CIA does," he recalled. "It was important to neutralise the effectiveness of everybody doing it." That meant publishing the names of 250 CIA agents, employees and informants in his 1975 book, Inside the Company: a CIA Diary. A second, two-volume book entitled Dirty Work was released in the late 1970s; it listed the names of more than 2,000 agency employees and affiliates, including agents posted in Western Europe and Africa.

The human toll of Agee's treason has never been publicly quantified. He was expelled from Britain in the mid-1970s, amid U.S. diplomatic pressure and a report that two MI6 agents in Poland had been executed as a result of Agee's expose. The CIA will only say that "several" of its assets died after being identified by Agee. Suffice it to say that scores of agents and informers were likely killed by the former agent's little "crusade."

In another era, the traitor's efforts would have earned him a bullet in the ear and an unmarked grave. But, amid the furor over "illegal" CIA activities in the post-Vietnam era, Agee became an international celebrity. Left-wing British MPs, journalists and other liberals rushed to his defense. The U.K. Telegraph remembers that one Labour MP actually introduced a bill to expel the CIA's London station, rather than Agee.

Amazingly, the turncoat agent was never punished. CIA and Justice Department officials feared that a trial would result in the naming of more operatives, and further damage to covert intelligence activities. Agee's book were eventually printed in 27 countries and earned the former agent a tidy sum, long before the enactment of laws which made it a crime to expose covert agents--or profit from published accounts of illegal activities.

Agee's carefully-cultivated image as an activist was in sharp contrast to his reputation in the CIA. According to the Telegraph, other agents remembered him as drunk and philanderer:

Former colleagues at the CIA claimed that Agee had been forced to resign from the agency in 1969 after complaints about his heavy drinking, poor financial management and attempts to proposition wives of American diplomats. They further alleged that Agee had become a KGB spy after being seduced by a Russian agent, and that he had effectively defected because he did not know how to extricate himself from his personal problems.

"...in 1992 a high-ranking Cuban defector accused Agee of receiving up to $1 million in payments from the Cuban intelligence service; and in 1999 Vasili Mitrokhin, a former KGB librarian who had secretly copied thousands of files and then donated them to British intelligence, gave further details of his relationship with Communist agents in The Sword and the Shield, co-written with Christopher Andrew.

According to Mitrokhin, Agee had directly approached the KGB with information about the CIA's work. Soviet and Cuban intelligence not only provided material for Inside the Company, Mitrokhin alleged, but had persuaded the author (codenamed Pont) to excise "all references to CIA penetration of Latin American Communist parties". The KGB file on the book claimed that it had been "prepared by Service A, together with the Cubans".

Agee maintained that these charges were smears, pointing out that he could not have been a useful double agent because once he had left the agency he lost access to its secrets. But his value to the Soviets lay in his credibility with a large swathe of western opinion. Mitrokhin claimed that the Covert Action Information Bulletin was founded on the initiative of the KGB, which assembled a task force to keep the Bulletin supplied with material designed to compromise the CIA."

Agee kept his U.S. passport until 1979(!), then traveled on documents issued by governments more sympathetic to his cause: Maurice Bishop's Marxist-Leninist regime in Grenada; the original Sandinista government in Nicaragua, and (surprise, surprise) Fidel Castro's Cuba. Afterall, it was the Cuban intelligence service that originally recruited Agee, and provided support for more than 20 years.

At the time of his death, Agee was living in Havana, running a website that arranged tours of the Cuba for those wishing to circumvent U.S. travel restrictions. But the traitor remained unrepentant and dedicated to his cause. Agee's claims--"millions of people all over the world had been killed or had their lives destroyed by the CIA and the institutions it supports"--were outlandish at best (some would call them bald-faced lies). Yet, Agee felt he was entitled to pass a death sentence on other operatives, or those merely suspected of CIA ties. It was a perverse and tortured rationale, and in reality, nothing more than a cover for Agree's own treason.

In an interview with the U.K. Guardian, published almost a year before his death, Agee vowed to continue his campaign against the CIA. "I never stopped what I started in London," he told the paper, "and I don't expect to stop till I'm dead."

For divine termination of Agee's traitorous crusade, we should all be eternally grateful.

ADDENDUM: Agee often claimed that he soured on the CIA (and its covert operations) because of U.S. support for corrupt regimes in Latin America. Therefore, it's a bit ironic that his last published article was a condemnation of human rights activists, lobbying for greater freedom in the region's most oppressed state. Agee dismissed their efforts, claiming that the movement is the tool of a foreign power. In case you haven't guessed, the government being defended by Philip Agee was that of Fidel Castro. And the article appeared in the official paper of Cuba's Communist Party.
Posted by George Smiley at 9:45 AM