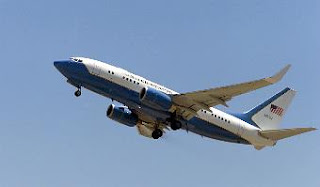 An Air Force C-40B/C, the military version of a Boeing 737-700 business jet. It's one of many aircraft used for VIP airlift, including those infamous Congressional junkets (USAF photo)

Today’s edition of the Politico details the latest “air war” between the Pentagon and Speaker of the House Nancy Pelosi. Apparently, Ms. Pelosi had to intervene when the military balked at transporting the domestic partner of Wisconsin Congresswoman Tammy Baldwin during a recent “fact-finding” trip to Europe.

According to the Politico’s Patrick Rogers and David O’Connor, Speaker Pelosi appealed to Defense Secretary Robert Gates, who told the Air Force to include Baldwin’s partner on the junket. But the issue is far from resolved:
The Pentagon appears to be self-conscious about transporting gay domestic partners at a time when it continues to enforce a “don’t ask, don’t tell” policy in its own ranks. The speaker is sensitive to the gay rights issue but doesn’t want to be drawn into a situation where it appears she is dictating policy for the use of military planes.
Under House guidelines, members of Congress may take their spouses with them on military flights if there is room for them and when it is “necessary for protocol purposes.” Although Baldwin, the only openly gay woman elected to Congress, exchanged wedding vows with Lauren Azar in 1998, her home state of Wisconsin does not officially recognize same-sex marriages, and military officials were apparently unwilling to consider Azar a “spouse” within the meaning of the House guidelines.
In appealing to Gates, Pelosi aides said their boss was simply asking the defense secretary to follow a precedent established by her predecessor, former Republican Rep. Dennis Hastert of Illinois. Pelosi told Gates that Hastert had allowed Baldwin to take Azar on a previous trip abroad.
Gates, who was apparently unaware of any earlier trips, told the speaker that she was responsible for the House travel rules and had the authority to make an exception, according to officials on and off the Hill. His only requirement was that Pelosi send him a letter authorizing the trip. Pelosi sent such a letter moments after the phone call ended, and Azar was allowed on the plane.
Secretary Gates is reportedly working on new rules for Congressional use of military airplanes and if would be refreshing if he would take a harder line on lawmaker travel. Fact is, the Pentagon wastes hundreds of millions of dollars on VIP travel every year, ferrying various cabinet officials and Congressional delegations to such exotic locales as Hawaii, Europe and the Bahamas, to name a few.

Sadly, the chances of a crackdown on Congressional travel are approximately…zero. The Pentagon understands who controls its budget, and if it takes junkets and private jets to keep Congressmen and Senators happy, so be it. It’s no accident that VIP airlift is run by the Air Force Vice Chief of Staff, a four-star general. When it comes to our jet-setting pols, the brass takes a personal interest, all in the name of keeping Congress happy.

We’re guessing that Ms. Azar won’t have any problems getting a seat on future Congressional junkets. But that begs an obvious question: why should the U.S. taxpayer fund travel by spouses, domestic partners, mistresses, or any other “significant other” that a Congressman drags along on a junket? It’s supposed to be a business trip, though (sadly) little gets done on most of these excursions. The Politico doesn’t provide the purpose of this latest trip, but it sounds like nothing more than an Easter vacation for those hard-working legislators.

Call us old-fashioned, but we don’t think that family members or romantic interests have any place on a Congressional trip. Getting rid of those “distractions” would be a good way to reduce the number of junkets, and curb our leader’s appetite for VIP travel.

Weaning Congress off military jets would be a difficult process, though it could be done. For starters, how about down-sizing the 89th Military Airlift Wing at Andrews AFB to a group, and getting rid of some of the smaller jets operated by that organization, including Nancy Pelosi’s favorite 737. Keep Air Force One, the VIP 757 and a few business jets. Along with the scaled-back wing at Andrews, the Pentagon could also trim its relatively large inventory of C-21s (the military version of a Lear Jet). The Air Force has no less than 74 C-21s, which also support VIP travel. If officials don’t rate a seat in the "smaller" executive fleet, let them fly commercial.
For traveling abroad, members of Congress could fly on the “rotators” that transport troops between CONUS and overseas locations. Ms. Baldwin and her fellow representatives might not enjoy sitting next to Private Snuffy for 14 hours, but it would give them a chance to see “how the other half lives.” They would discover that rotator flights aren’t as posh as a C-37, but they are more comfortable than the transport planes that often haul military passengers.

If you’ve been there, you know what we’re talking about. There’s nothing quite like a troop seat in the back end of a C-130. The temperature is always too hot or too cold, and there’s little room to stand up or stretch out, thanks to the pallets or equipment that fill the cargo bay. For in-flight service (if you’re lucky), there’s an MRE or a box nasty, handed out by a grumpy loadmaster.

It’s a reminder that military airlift is a multi-faceted mission that involves far more than transporting VIPs in comfort and style. It’s a lesson that needs to be learned by members of Congress, their families, and their various romantic partners.
***
The Politico also reports that other Representatives (Democrats and Republicans) were vocal in their support of Ms. Baldwin and her partner. That probably means that virtually every Congressman had a spouse or significant other along for the trip. Under generous House travel rules, a member may bring an adult child along (if their spouses don’t make the trip), and in some cases, take their spouse and an adult child. However, Congressmen are required to reimburse the government for the “child’s” travel expenses when both a spouse and a child make the trip.
Posted by Unknown at 3:43 PM

Great suggestions that will never happen for the reasons you listed. Honestly, I'm surprised that someone had the balls to attempt to enforce the House's own rules on the use of the planes. Though it will never happen, the thought of a congressman with entourage waiting for the rotator at BWI or Seattle along with 200 GIs and 100 screaming kids makes me smile inside.

Whenever one of the embassies I served in was preparing for a congressional junket we always toyed with the idea of sending a beaten-up carpool car -- like most of us used every day -- to pick up the Codel at the airport. We always chickened out, though, knowing full well that these people voted on our appropriations bills. That, though, would hardly be their revenge had we sent a carpool vehicle to fetch them. Instead, they would have sent a message to the Secretary of State that would likely have resulted in the recall of the ambassador. Or at least that's what we all imagined. I still wish we could have sent one or two codels a Chevy without working air conditioning, and let them discover that the windows were sealed shut in the lightly armored vehicles.

For all our bravado (shared, no doubt by military and civilian officers alike) we always pulled out all the stops to make all codels comfortable and to fulfill their every desire, from presidential briefings to shopping trips for their wife (with someone from the embassy assigned as full time escort interpreter.

When I was a student at the National War College I had a classmate who worked on VIP air transport. We shared stories of codels -- he flying them, we escorting them. Alas, we both admitted we stumbled all over ourselves catering to ingrateful Congresspeople who really should have been told to take commercial air transport and buses. F

Congressional members isolate themselves from the rest of society in seemly every manner. It certainly wouldn’t hurt their legislating ability if they heard from regular citizens instead of lobbyists and their peers within their echo chamber. That is why I have changed my opinion on term limits; I now support them. We threw out our congressman after 9 terms. I told him he had become a professional politician and was not listening to his mostly moderate to conservative constituents. I have known him since 1989 and wrote him regularly. He is a nice, civil man who “grew” in office towards the left; he got too big for his britches, as my grandmother would have said.

I remember well flying in a C-47 sitting in canvas seats. Congressmen should try that once.

Hi. You’ve got a great blog. A few weeks ago I came back from a tour. I traveled with vip travel. it was awful I will never again choose this company. Later on I browsed the net and bumped into this great site www.pissedconsumer.com. It turned out that there are lots of people who are not pleased with the company.