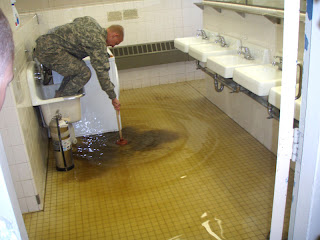 Sewage blocks a bathroom drain in a barracks at Fort Bragg, North Carolina (photo by Ed Frawley, via AP)

The Army "One Plus One" standard certainly isn't in effect at Fort Gordon for permanent party soldiers in at least one brigade. Most E4s and below share a room with a roommate. Despite being in violation, the brigade won't allow E5s (buck sergeants) to receive BAH (basic allowance for housing). Whomever came up with the brilliant idea of one kitchen and one day room for a brigade's worth of single junior enlisted soldiers probably hadn't lived in barracks for over 20 years, if ever. Amazingly, the day room/laundry room complex was built in 1998.

I was stationed at a joint-service school for a year back in the late '80's. At that time new barracks were constructed that were a wonderful change from what we had been living in. After the school was complete, I moved to my permanent party installation and was very disappointed to see the conditions that I would live in for the next 5 years.

There was a joke, only funny because seemed to true to us in the Army, that, when the USAF builds a base, the first thigns they construct are wonderful family housing, community areas, great enlisted housing, all of the niceties. Then, they would go to Congress and say, "We need more money to build the airstrips and hangars." Of course, the funding would be found to build these necessary items.

Conversely, the Army would build the motorpools, the ranges, the training areas. Then they would go to Congress and say, "We need more money to build living areas." What limited funds they could get, if any, were then used to do the best they could.........

Hello, i am glad to read the whole content of this blog and am very excited and happy to say that the webmaster has done a very good job here to put all the information content and information at one place. Mold Inspection