Have You No Decency, Mr. Rockefeller? 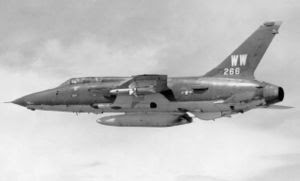 A two-seat version of the F-105, configured for the SAM suppression (Wild Weasel) mission. Scores of F-105s and other fighters were lost on raids against heavily-defended targets in North Vietnam. In the era before precision-guided weapons, tactical aircraft dropped "dumb bombs" at low and medium altitudes, in the teeth of enemy defenses (Wikipedia photo).

Peace Corps volunteer-turned-U.S. Senator (and military expert) Jay Rockefeller has apologized for his feckless remarks about John McCain. In an interview with his hometown newspaper, the Charleston (West Virginia) Gazette, Rockefeller opined that Mr. McCain, a retired naval aviator, former POW and presumptive GOP presidential nominee, doesn't understand the human consequences of war.
He's a fighter pilot. He flies at 35,000 feet and drops laser-guided bombs, missiles. He was long gone when they hit. What happened down there, he doesn't know.
That's unkind, because that's fighting for your nation and that's honorable. But you sort of have to care what goes on in the lives of people. ... and he never gets into those subjects.
In his "apology" (or what passes for an apology among Democratic politicians), Senator Rockefeller claimed that he used the wrong analogy, saying he meant to suggest that Mr. McCain doesn't care about "real people." The men and women who served with McCain in the military--including his cellmates in the Hanoi Hilton--would beg to disagree. Ditto for the thousands of constituents that McCain has helped through the years, during his tenure as a Congressman and Senator.
But Rockefeller's remarks are more than an attack on John McCain--they're a personal affront to every aircrew member who's gone in harm's way, attempting to put bombs on target. Many of them sacrificed their lives to spare civilians lives and other forms of collateral damage. Until the 1970s, most of our aircraft dropped unguided "dumb" bombs, making the job even more dangerous. Delivering those weapons accurately required a steady hand and unbelievable courage, flying a gauntlet of enemy fighters and ground-based air defenses.
Consider the Paul Doumer Bridge, one of the most important (and heavily-defended) targets in North Vietnam. A major artery for enemy troops and supplies moving into South Vietnam and Laos, the narrow, mile-long bridge was finally added to the target list on 11 July 1967. Three U.S. fighter wings based in Thailand--the 355th, the 8th and the 388th--were ordered to attack the span that afternoon. Leading the mission was Colonel Robert White, a former test pilot and veteran of more than 100 flights in the X-15 rocket plane.
As Air Force magazine recounted in 1988, the first mission against the Doumer bridge was anything but a milk run--and it was hardly conducted at high altitude:
Start-engines was at 1:50 p.m. At 2:18, the strike force started to roll. It was clear skies all the way, target time 3:58. After refueling over Laos, the F-105s, preceded by their Wild Weasel and flak-suppression flights, crossed the Red River and headed southeast along Thud Ridge, toward Hanoi. As they approached the bridge, they were met by MiGs in a head-on attack that failed.
Moments later, White rolled into his bomb run from 13,000 feet. In the seconds before bomb release at 8,000 feet, he and the pilots who followed held the intense concentration demanded for accurate bombing, flying into a highly visible barrage of flak and several SAM launches. But the experience of those veterans paid off as the 3,000-pounders blossomed below.
The leader of the second flight looked back. They had done it! A span of the railroad bridge lay in the water. A few minutes later, the other two wings dropped two spans of the highway bridge. Thanks to the outstanding work of the Weasel and flak-suppression flights, the entire force made it safely home or to friendly bases.
After bomb release, White broke hard to the left, down the Red River, then led the force west, low and fast across a plain to hills 20 miles away, rather than withdrawing along Thud Ridge as mission planners had recommended. His judgment proved correct. No one was hit on the way out. The entire mission had been a text-book demonstration of professionalism.
The next day, at the suggestion of his wing commander, Colonel White personally carried a photograph of the downed bridge to his maintenance troops, to show them how their efforts had paid off.
We should point out that the first, successful mission against the Doumer bridge was conducted with unguided bombs. The span was quickly rebuilt, necessitating more attacks by Air Force and Navy jets. The Doumer span--and other key bridges in North Vietnam--weren't completely destroyed until the Linebacker I campaign of early 1972, and the introduction of TV-guided bombs.
By that time, John McCain had been sitting in a North Vietnamese prison for almost five years. He was shot down over Hanoi on October 26, 1967, attacking a power plant in the city--another target that had previously been off-limits.
The Arizona Republic (and McCain's own books) offer a sobering account of what followed. Describing his survival--and resistance--as heroic would be a gross understatement.
But apparently that means nothing to Senator Rockefeller. To hear him tell it, John McCain--and other combat aircrews--know nothing about the human toll of combat.
Have you no decency, Mr. Rockefeller? The men who went "downtown" to Schweinfurt, Berlin, Tokyo, Hanoi, Baghdad and a thousand other targets would like to know.
Posted by Unknown at 1:33 PM

"But you sort of have to care what goes on in the lives of people."

What in the heck does Mr. Rockefeller know about what goes on in the lives of anybody but his circle of wealth and privelege? I mean, aside from the one time he had to make do with unwaxed dental floss?

Exactly, Ken. Well, I suppose that when you have a lot of money people can call you an eccentric instead of a dumbass who wouldn't know what honor was if it bit him in the butt.

The fact that LGBs were not dropped in Vietnam until the year after McCain was shot down makes Rockefeller's comment all the more stupid.

Isn't this the same Rockefeller that visited Syria on the eve of war with Iraq? The Dems are flirting with the treason label, much like they did during the Civil War.