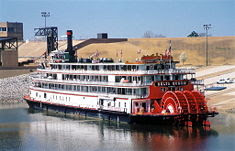 The Delta Queen at Mud Island in Memphis (Wikipedia photo).

Growing up along the Mississippi River, I always looked forward to a visit by the Delta Queen, the last of the wodden, stern-wheel steamboats to ply the nation's interior waterways.
There was something majestic, even romantic about the vessel dropping its gangway along our riverfront, its steam calliope blaring. It was a throwback to the era of Mark Twain, when steamboats were a primary mode of transportation along our rivers, hauling the passengers and cargo that helped build America.
While I never traveled on the Queen, I was lucky enough to get a tour of the boat during a port call. On board, it seemed a bit small, even cramped in some spaces. But there was no denying the charm and luxury of the Delta Queen, with its Victorian decor and elegant appointments. On the spot, I made a promise to sail one day on the steamboat, a vow shared by many who watched the Queen glide by on a summer day.
Regrettably, I may be unable to keep that promise. The 80-year-old stern-wheeler may be forced into retirement at the end of the current season, thanks to the U.S. Congress. Decades ago, law makers mandated that vessels carrying passengers on overnight excursions must be built primarily of metal. The idea was to make ocean-going ships more fire resistant; riverboats, including the Queen, were subjected to the same regulation.
However, Congress also granted a fire-safety exemption to the Delta Queen, renewing it nine times since 1968. The exemption was based on several factors, including the vessel's status as the last of its kind; the Queen's impeccable safety record, and the realization that steamboats (and their passengers) are never more than a few hundred yards from the river bank and rescue.
Now, the Delta Queen's exemption is in danger. Last week, a key House committee rejected a vote on legislation to extend the riverboat's exempt status. As the St. Louis Post-Dispatch reported:
The House Rules Committee on Tuesday rebuffed Rep. Steve Chabot, R-Ohio, who wanted to amend a Coast Guard reauthorization bill to exempt the Delta Queen from federal fire safety standards.
But the Rules Committee said Tuesday that Chabot could not offer his Delta Queen proposal as an amendment when the bill is scheduled for debate.

Rep. William Lacy Clay, D-St. Louis, who cosponsored the exemption, told the Rules Committee that to deny a debate and vote "flies in the face of reason and will only contribute to the declining respect that Americans hold for this institution."

Leading the fight against the steamboat is none other that Minnesota Congressman James Oberstar, Chairman of the House Transportation and Infrastructure Committee. A spokesman for Oberstar's committee claims that the Coast Guard thinks the vessel is a fire hazard. That begs a rather obvious question: if the vessel is such a safety hazard, why has the service agreed to multiple renewals of the Queen's exemption, stretching back over 40 years?

As many readers know, Representative Oberstar has a reputation on Capitol Hill as a tireless defender of bicycle paths and transportation pork. He was one of the primary authors of last year's shameless highway bill, a $295 billion mounment to government waste that included $23 billion for "special projects" including museums, parking lots, snowmobile trails and, of course, bicycle paths.

Perhaps Mr. Oberstar would be more supportive if the Delta Queen had ties to a light rail project, or the steamboat's owners, Majestic America Line, offered bicycle tours as part of their cruise packages.

In any event, there is a chance that one of America's historic treasures will not be sailing the Mississippi or its tributaries next year. The Delta Queen is the only riverboat listed on both the National Landmark listing, and the National Register of Historic Places. It is certainly worthy of preservation and continued operations, under its long-standing exemption.

We can only hope that Mr. Chabot and Mr. Gray succeed in their efforts.

Posted by George Smiley at 4:26 PM

So the majority Democrats have killed this bit of nostalgia in the name of fire prevention. More likely, this development can be traced either to unions of the lack of a kickback somewhere. Take a week off, Smiley, and go jump aboard before sinks this national treasure. F