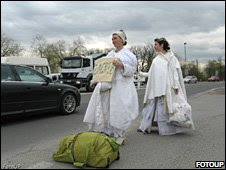 Italian artist Giuseppina Pasqualino de Marineo (left) and a companion, on their "Brides for Peace" tour through the Middle East. Ms. De Marineo's performance-cum-crusade ended tragically in Turkey, where she was raped and murdered (BBC photo)

This one is equal parts tragedy and farce. And sadly, the tragic element could have been easily prevented, with a little measure of common sense. But, as Michael Savage has observed, liberalism is a mental disease, so rational thought usually takes a backseat to emotion and feelings.

Normally, that way of thinking typically results in more government programs, new activist groups, various media crusades and the latest crop of leftist politicians. But sometimes, it can get you killed.

Consider the case of 33-year-old Giuseppina Pasqualino di Marineo, an Italian performance artist. Ms. Di Marineo and a friend came up with a novel idea for promoting peace in the Middle East. Wearing bridal gowns, the planned to hitchhike through the region. The so-called "Brides for Peace" tour would carry them from Turkey, through Lebanon, the "occupied" territories and on to Jerusalem. Exactly how this would promote peace was never fully explained, but Di Marineo and her friend launched their expedition a few weeks ago, filled with high hopes.

After arriving in Istanbul, Di Marineo and her fellow artist took different paths, with plans to link up in Beirut. You can probably guess what happened next. From the AHN news agency:

Di Marineo's naked and decomposing body was found in bushes near the city of Gebze, which is located on the eastern edges of Istanbul, on Friday night, according to Di Marineo's Web site.

Turkish police reported that they have arrested Murat Karatas in connection with the killing, who later confessed that he first raped and then killed her.

"Her travels were for an artistic performance and to give a message of peace and of trust, but not everyone deserves trust," another sister, Maria, told the Italian news agency, Ansa, according to BBC News report.

Di Marineo's project was meant to bring peace to the war-torn areas like Mediterranean and the Balkans as they dressed as brides and travel by hitch-hiking.

That's right, peace in the Middle East can be achieved by a couple of western "artists," hitch-hiking through the region, and dressed in bridal gowns. There's no word on whether Di Marineo's companion plans to continue her journey. We can only imagine what kind of reception she'll receive from the local Hizballah and Hamas delegations in places like Beirut or the West Bank.

While the passing of Ms. Di Marineo is regrettable, we're a bit amazed by the tone of media coverage. The accounts we've read depict her journey as some sort of noble mission, rather than the fool's errand it was. Somewhere along the line, you'd think that a clear-thinking adult would have told the "artist" that her mission was an invitation to disaster, one that unfolded on that road near Istanbul.

But, we're guessing that most of Di Marineo's friends share her values and world-view. Now, they're left to mourn the results of her horribly misguided "artistic project."

For her final performance, the late artist is a slam-dunk winner of "Idiot of the Week" honors, and an early nominee for the 2008 Darwin Awards.
Posted by Unknown at 9:56 PM

A true Greek tragedy, by someone dedicated to the best of intentions, but unable to distinguish fantasy from reality.

Perhaps the only purpose some people have in life is to serve as a object lesson for others.

Lambs convinced that if they can just get the wolves to see how nice it is to be a sheep, the wolves will become sheep too. -cp

As the simple, but salient Forrest Gump quoted his mother, "Stupid is as stupid does."

Yep. I wouldn't recommend it as performance art on I10, let alone where misogyny is a tenet of the religion.

While I'd like to feel sorry for her, and for the family and friends she left behind, I'm a little angry with them too. Did no one ever try to talk sense to this poor woman?

I've quoted you and linked to you here: http://consul-at-arms.blogspot.com/2008/04/re-idiot-of-week.html