We Couldn't Make This Stuff Up 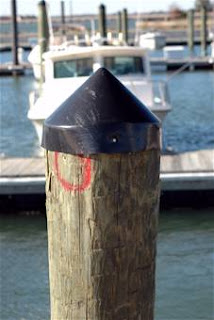 Your tax dollars at work. An "anti-perching" device at Langley AFB, VA, designed to keep birds away from the installation--and its F-22 stealth fighters. The Air Force spent $16 million on birdstrike-related damages in 2007 (USAF photo).


The latest adversary for the Air Force's F-22 Raptor stealth fighter? No, it's not a new Flanker variant, the Chinese J-10, or even budget-cutters in Congress and the Pentagon.

No, the F-22 is facing an even more sinister threat--free-falling clams.

Free-falling clams dropped by in-flight birds are regular air threats to the F-22 as gulls drop fist-sized mollusks on the Langley Air Force Base runway to break open the shell-fish appetizer.

The birds' shelling device just happens to be a convenient launch pad for the F-22. Although the gulls remove half their mess -- slurping up tender meat from the runway -- they leave behind hard, brittle sea shells for an F-22 to suck up through its engine intake that can cause severe damage.

Although the Air Force is wildlife friendly, Lt. Col. Lawrence Spinetta, the 1st Fighter Wing Safety Office chief, isn't willing to let a $10.2 million jet engine go to the birds -- or the clams.

"BASH is particularly important for Raptors because they are so expensive," Colonel Spinetta said. "If we lose one aircraft, it costs the Air Force and taxpayers $135 million.

Federal Aviation Administration officials claimed birds cost the civil aviation industry about $600 million per year. Air Force officials coughed up approximately $16 million in 2007 from bird-strike damages. Only a few types of birds account for the majority of the damage. Certain species in particular do more than peck at the Air Force wallet.

However, the most expensive bird is the American white pelican. In only 18 strikes, this bird accounts for more than $257 million in damages. Mr. Sullivan said this cost is attributed to the size and weight of the bird -- a whopping 20 pounds -- compared to an average 5 pounds for the turkey vulture.

"The black vulture and turkey vulture are the greatest threat to Air Force aircraft overall because they are somewhat large and soar at high altitudes -- about 3,000 feet," Mr. Sullivan said. "During the day as the air warms up, they ride a rising thermal draft. Their high altitude makes them hard to detect from the ground."

These vultures, among other avian species, are increasing in population because of U.S. conservation efforts, he said.

Almost nothing can be done, short term, to avoid high-altitude strikes. But the Langley AFB BASH team is heading up a project to track the migration of the osprey, the fifth most-dangerous bird species to aircraft, Colonel Spinetta said. There are more than 72 osprey nests within a 20-mile radius of Langley AFB.

To mitigate the growing threat, officials from the 1st FW, NASA and USDA came up with a unique way to track the osprey.

"Captured birds were fitted with Global Positioning Systems-capable transmitters ... (that) transmit the altitude, speed and direction of travel of each bird every two hours," Colonel Spinetta said in an editorial for the Flight Safety Magazine. "As a result, Langley AFB has been able to pinpoint nests and focus its reduction, suppression and prevention efforts to eliminate many osprey hazards."

The nests are usually relocated to safer areas by USDA members.

Other more traditional techniques for eliminating hazards involve harassing birds on the airfield, Mr. Olexa said. The most common tool is simply a combination of pyrotechnics and artificial bird distress calls, called bioacoustics. This, he said, is especially useful for birds like gulls that drop their food on the runway. Other long-term techniques take a bit more forethought, called habitat manipulation.

"The trick is to make the airfield less attractive to wildlife," Mr. Sullivan said. One way is by planting certain grass species that cause an upset stomach to geese. Another example is to avoid planting fruit/nut producing trees.

One technique, which is considered a last resort, is called depredation, or lethal action. But Mr. Sullivan said the purpose of lethal action is to remind other birds there's an actual threat, not to terminate the flock.

The article doesn't say how much it cost to outfit those Ospreys (the bird, not the plane) with those GPS units. Not to mention the added expense of planting less tasty grass species, and placing all those perch-denial devices.

No one denies that bird strikes are a significant aviation hazard. Twelve years ago, a collison with a goose resulted in the loss of an E-3 AWACS (and 24 crew members) at Elmendorf AFB, Alaska. But, some of the "solutions" in place at Langley are bound to be more costly than other measures, say a covey of security policemen (or hunters) armed with shotguns.

"But, some of the "solutions" in place at Langley are bound to be more costly than other measures, say a covey of security policemen (or hunters) armed with shotguns."

Heh ... only until the Sierra Club sues the AF for picking on those poor, lovable, defenceless little gulls. Then it gets a lot more expensive ... :-(

Some species actually increase their reproduction rates when hunted, or one is taken out and something else comes in.

Best way to deal with this is to bring in a native species that hunts the critter you want controlled. There is a good documentary I saw about using native species as pest control in a SAAF base. Cheetahs, pythons, monitor lizards and hawks were all brought in there.

Can you discuss the proxy war on the borders of Iran? Who are the groups, size, capabilities and what are their objectives?

RE: We Couldn't Make This Stuff Up

The govt wastes all that money and what they really need are these: www.jerkstopper.com

The government should do some research...or just go to www.bird-x.com. This company's products are all humane and eco-friendly and extremely effective at deterring birds.

This was great program over in Korea. A few of us Army folks at Osan AB kept that place clean for a few years. Safety offcie provided trasportation, gunns, ammunition and a guide. We spent hours on weekends and after work critter killing on Osan. And it's not ust birds. Stra ycats and dogs got treatment. Only down side is they only allowed 6 shot so some of the pheasents, ducks and geese were hard to take down.