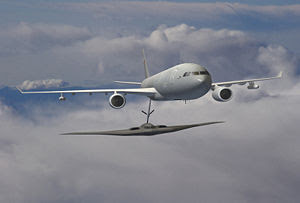 An artist's rendering of the B-2 "Spirit" being refueled by the new KC-45 (insert nickname here). Illustration courtesy of Northrop-Grumman.

While the Government Accountability Office prepares its final decision on the USAF tanker contract, the service is trying to come up with a name for its new refueling aircraft.
And, for the first time in more than 30 years, the Air Force is letting its members make that choice, with a "name-the-tanker" contest.
Airmen and USAF civilians have until 30 May to submit their suggestions, via e-mail, to namethetanker@pentagon.af.mil. According to the contest rules, proposed names may be no more than two short words. Entrants should also explain their choice, and provide contact information.
The last Air Force plane to earn its moniker in a naming contest was the F-16 "Fighting Falcon." Never mind that the fighter's unofficial nickname ("Viper") is probably more popular than its official handle. The new USAF tanker will be officially named by an Air Force member, regardless of any "unofficial" title it might acquire.
That strikes us as a good idea, for a couple of reasons. First, since airmen will operate and maintain the new tankers for the next 40 years or so, it's only appropriate that they name the aircraft. Secondly, given the Air Force's past, lame efforts at naming air refuelers, those "ordinary" airmen or civil servants are bound to do a better job.
To prove our point, consider this: over the past 60 years, the USAF has operated three major types of tanker aircraft. The KC-97, which entered service in 1950, was a derivative of the famous B-29 bomber used in World War II and Korea. The service dubbed the KC-97 the "Stratotanker," which wasn't surprising, since "Strato" (a varaint of strategic) was attached to a variety of Air Force platforms--all built by Boeing--in the 1950s.
It was the heyday of Strategic Air Command, which provided much of our global strike and air refueling capability. With SAC controlling those critical assets, it's first all-jet bomber (the B-47) became the "Stratojet." The B-52, which came along a few years later, was labeled the "Stratofortress." When SAC began acquiring KC-135 tankers in the late 1950s, they were also named "Stratotankers." So much for originality and creativity.
Thankfully, the Air Force had abandoned its "Strato" kick by the time the service began buying more tankers in the early 1980s. The Vietnam War had demonstrated the need for greater refueling capabilities. During much of that conflict, SAC's tanker fleet was stretched thin, supporting operations in Southeast Asia and at other points around the globe. The fill the tanker gap, the Air Force decided to buy 60 additional refueling planes, based on the McDonnell-Douglas DC-10 design. The USAF version was dubbed the "Extender." You know, longer range, extended ops.
So, in 60+ years of tanker operations, the Air Force has managed to come up with exactly two nicknames for three different models of refueling planes. Given that unimpressive record, it shouldn't be very hard for enterprising airmen or civilian employees to come up with something more creative than "Stratotanker" or "Extender." However, we should note that the Air Force has been recycling aircraft nicknames of late. The C-17 is officially known as the "Globemaster III," and the Joint Strike Fighter will be the "Lightning II."
Against that backdrop, here are a few suggested names for the new tanker. Some are less-than-inspired, while others are too sensitive to win the contest. One or two might actually work. We also encourage readers to submit their nicknames for the aircraft, and if you're eligible, enter the Air Force contest. You may not win, but you can't do any worse than "Globemaster III."
Potential Names for the New Air Force Tanker (KC-45)

1. Stratotanker II (our less-than-inspired choice)
2. Extender II (See #1)
3. NB3 "Not Built By Boeing"
4. Eurotanker (with a nod to its Airbus roots)
5. "Frenchie" (another acknowledgement of its Airbus origins)
6. "Shelby" (as in the Alabama Senator, who has labored long and hard for the Northrop-Grumman tanker, which will be assembled in his home state)
7. "Druyun" (in honor of the Air Force official whose illegal conduct helped torpedo the original tanker lease deal with Boeing, and allowed Northrop-Grumman-EADS to get into the competition)
8. Endurance (with apologies to the Royal Navy)
9. "Hooe"(recognizing the legendary Air Corps mechanic who kept the Question Mark aloft during the original air refueling mission, demonstrating the viablity of in-flight refueling)

Strato was a prefix associated with Boeing products alone. The Statocruiser is another one, for example.

In days gone by, specific manufacturers had themes to their names - McDonnell was supernatural - Phantom, Goblin, Demon, Banshee, etc.; Douglas used the Sky prefix as in Skyhawk, Skylancer, Skyraider, etc.; Grumman was cats as in Bearcat, Tomcat, Hellcat, Wildcat, Tiger, Jaguar, etc., Republic has Thunderjets, Thunderchiefs, Thunderbolts, etc.; and so on.

I hope that the USAF turns to Northrop's heritage when it thinks about names for the KC-45, although I also think the Frog is a great name.

How about:
"The French Filler"
"Collaborator"

"De Soleil" literally "Of the Sun" but with a wicked homophone

To extend what Ran said, I think the first "Strato" was the Boeing 307 Stratoliner (late 30's) and I believe the prefix is short for "Stratosphere" since the 207 was the first presurized transport capable of flying above the troposhere.

Actually the F-35 Raptor was in a un-official naming contest a few years ago by the Chief of Staff.. But aparrently a inner decision was made later on in the process.

Paint it green and call it The Frog.

I'm afraid when the first crew chief hears the name "Porkmaster" the name will stick. It sounds good, is reflective of it's mission and easy to say. We went years with our commanders and crew members telling us maintainers we "had" to call the B-1B the "Lancer". Some were even in trouble for calling it the "Bone" but Bone it is, to anyone who works or flies them today.