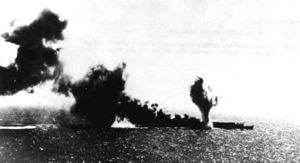 The Japanese light carrier Shoho, on fire after a successful U.S. air attack during the Battle of the Coral Sea. Shoho was the first major enemy naval combatant to be sunk by American forces during World War II (Wikipedia photo).

Sixty-six years ago today, two naval fleets, one Allied, the other Japanese, were on a collision course in the Southwest Pacific. The Battle of the Coral Sea was underway.

For the U.S., the engagement came at one of the darkest hours of World War II. Following their stunning victory at Pearl Harbor, Japanese forces advanced rapidly through the central Pacific and Southeast Asia, taking Wake Island, Guam, Hong Kong, Singapore and the Dutch East Indies in rapid succession. In early April 1942, American forces on the Bataan Peninsula in the Philippines surrendered, the largest capitulation in our nation's history. The garrison on Corregidor would hold out for another month, but their fate had been sealed.

With the Philippines essentially secured, the Japanese set their sights on the Solomon Islands and New Guinea. By advancing down the Solomon chain--and taking New Guinea as well--Japan could threaten supply lines between the United States and Australia. In March 1942, Japanese Prime Minister Hideki Tojo warned that Australia could face the "same fate as the Dutch East Indies." A planned thrust through the Solomons and New Guinea seemed to be the first step towards fulfilling that vow.

But the Japanese Imperial Navy had other goals as well. Realizing that our carriers had been absent from Pearl Harbor on December 7, 1941, they hoped to lure them into a decisive battle. Aircraft carriers remained our most potent strike force in the Pacific, one that had to be eliminated before Japan could claim victory and force Washington to sue for peace.

Against that backdrop, the Japanese dispatched a pair of invasion forces in late April 1942, one bound for Tulagi, in the Solomons, the other earmarked for Port Moresby, located on the southern edge of New Guinea.

While Japan planned to use Tulagi as a reconnaissance base, Port Moresby had a far greater strategic importance. Taking Port Moresby--the last major Allied installation between Hawaii and Australia--would give the Japanese a key staging point for interdicting supply convoys headed for the Southwest Pacific. Covering the invasion force were two fleet carriers, a light carrier, two heavy cruisers and supporting craft, under the command of Admiral Takeo Takagi.

His American counterpart, then-Rear Admiral Frank Jack Fletcher, had two fleet carriers (the Yorktown and the Lexington), plus two others en route (Enterprise and Hornet), though thye would arrive to late to join the battle. Fletcher also had a screening force of cruisers and destroyers, led by Australian Rear Admiral John Crace. Their primary mission: prevent an invasion of Port Moresby.

In many respects, the battle that followed became a template for future encounters between U.S. and Japanese forces. Coral Sea was the first sea battle fought entirely by carriers and their aircraft; the opposing fleets never moved within visual range of each other. It was the same scenario that would play out at Midway, barely a month later.

For the Americans, Coral Sea also foreshadowed the breakthroughs in communications intelligence (COMINT) that would, ultimately, guarantee victory. NSA historian Frederick Parker detailed these triumphs in A Priceless Advantage, his noteworthy account of COMINT support at Coral Sea, Midway, and in the Aleutians campaign. As Mr. Parker notes, the successful penetration of Japan's JN-25 naval code (in early 1942) not only proved decisive at Midway, it also provided invaluable intelligence during those early, critical battles near Alaska and in the Southwest Pacific.

Still, COMINT support in 1942 was far from perfect. The same could be said for leadership and battle tactics on both sides. Some historians have described the Battle of the Coral Sea as a series of missed opportunities and scrapes with near-disaster on both sides. In hindsight, it's difficult to disagree with that assessment, though bad weather (and the war-fighting technology of that era) hindered both Japanese and U.S. forces.

The engagement began on 3 May, with Japanese forces occupying Tulagi and quickly starting work on a seaplane base. Their efforts were interrupted the following day, when aircraft from the Yorktown attacked the invasion force, sinking a Japanese destroyer and five transport vessels.

American reconnaissance planes found the Port Moresby invasion force on 6 May, prompting an attack by Army Air Corps B-17s (they missed). With the Japanese carrier force still unlocated, Admiral Fletcher made the risky decision to detach his screening force, to cover the likely invasion route. While sending the Yorktown and Lexington northward, in search of Japan's carriers.

With improving weather on 7 May, both fleets launched all available aircraft, but neither could find the main body of the opposing force. Still, both sides managed to draw blood. Japanese aircraft attacked and sank the oiler Neosho and the destroyer Sims, describing them (incorrectly) as a carrier and cruiser, respectively.

Both Fletcher and Japan's tactical commanders pressed their attacks the following day, targeting the fleet carriers on both sides. U.S. dive bombers damaged the Shokaku, putting it out of commission. The second carrier, the Zuikaku, went undetected, but it had lost a significant number of aircraft and crews during the battle.

In return, Japanese bombers and torpedo planes damaged both the Yorktown and Lexington. Initial damage control efforts appeared to be successful, and it was thought the Lexington could be saved, despite hits from two bombs and a pair of torpedoes. But leaking aviation fuel exploded an hour after the first attack, igniting massive fires that forced the crew to abandon ship. The "Lady Lex" was later sunk by an American destroyer, to prevent the vessel from possibly falling into enemy hands.

Coral Sea has been rightly described as a tactical triumph for Japan, but a strategic victory for the United States. Based on their own losses (and faulty intelligence information), Japanese commanders cancelled plans to invade Port Moresby. The enemy threat to Australia and New Zealand abated a bit, though securing the southern supply lines would require months of desperate fighting in the Solomons and New Guinea.

However, achieving that victory came at a price for the United States. Loss of the Lexington left the Navy with one less fleet carrier on the eve of an even more important battle--Midway. Fortunately, the Americans would be able to match Japanese forces in that encounter, thanks (in part) to heroic repair efforts that put the Yorktown back in service, after only two days in dry dock at Pearl Harbor.

As for the Japanese, Coral Sea provided one final (and perhaps, decisive) twist. While Shokaku and Zuikaku survived to fight again, they would not be ready in time for Midway. That left Tokyo with four carriers for that battle (one more than the U.S. Navy could muster), but all of the Japanese flattops would be sunk at Midway.

Seven decades later, historians can only speculate about the impact of two additional Japanese carriers at Midway. The fact they weren't available is one of the most important--yet forgotten --footnotes from the Battle of the Coral Sea.

***
ADDENDUM: Despite his victory at Coral Sea--and his significant contributions at Midway and Guadalcanal--Admiral Fletcher emerged from those battles with an (undeserved) reputation as a mediocre commander. In some instances, he is blamed for decisions made by others; Fletcher is often faulted for failing to relieve Wake Island in late 1941--but the decision to terminate the mission was made by his superiors.

Similarly, Admiral Fletcher's temporary "withdrawal" from the waters around Guadalcanal on 8 August 1942 has long been scorned by historians and Marine veterans of the campaign. But that assessment ignores the marching orders given to Admiral Fletcher--preserve your carriers at all costs--and his need to refuel, anticipating the arrival of Japanese carriers.

Placing the blame on Fletcher also ignores communications errors that left other commanders unaware of plans to withdraw, and the mistakes of other officers, including John McCain's grandfather. Commander of Allied air forces in the South Pacific area, Admiral John S. McCain, Sr. was asked to conduct additional reconnaissance missions in the area around Guadalcanal, to watch for Japanese naval units moving down the narrow passage known as "The Slot" But, for unknown reasons, McCain didn't order the missions and never reported his decision. That oversight--coupled with tactical bungling by other commanders--led to the allied defeat at the Battle of Savo Island.

Seven decades later, historians can only speculate about events... and ...reputations.

Oh, for the expertise of today's experts on various current events.

I sometimes believe that Yamamoto left that oil on purpose. Taking it out, even if it had cost the strike carriers, would have been worth it and would have moved naval operations back to the US mainland taking us out of the central Pacific.

Have been reading a good deal on the Pacific War of late, (Willmot's Barrier and Javelin, Empires in the Balance; Lundstrom
s First South Pacific Campaign and presently Tully and Parschall's Shattered Sword (on Midway).

Following the stupid and incomprehensible Japanese decision to go to war with America as opposed to attacking the Dutch East Indies and the British and then daring the Americans to fight -- a decision that was mostly Yamamoto's doing, I think the best Japanese strategy for a showdown with Nimitz's carriers was in the Coral Sea. THAT was where Combined Fleet needed to seek the showdown -- not at Midway.

Midway was too near Hawaii, and too far from the Japanese bases. Even with two more decks, Nagumo had too much to do at Midway: beat down the island and keep on the look out for the US fleet.

Coral Sea was also far from the big Japanese bases -- but it was far from Hawaii also -- and the US carriers would have had to come out to defend the sea lanes to Australia: if not to defend Port Moresby, than to cover Fiji, New Caledonia, etc.

Midway would have indeed been different had Nagumo had Shokaku and Zuikaku at Midway -- but what if Nagumo had been with Shokaku and Zuikaku in the Coral Sea with his other four carriers? Had that happened -- the Doolittle raid would have looked like a even a worse strategic idea than it was (it all worked out well, but sending those two carriers on that errand was just crazy, as Nimitz argued).

Ultra would no doubt have cued the allies in on what was coming, and Fitch/Fletcher would have had to haul off till they could be reinforced by Halsey. Probably the Coral Sea battle would have been later. . .and not over Port Morseby. Still, that area was a far better venue for Yamamoto to seek his showdown than his beyond clueless decision to force things around Midway, where the US had all the advantages.