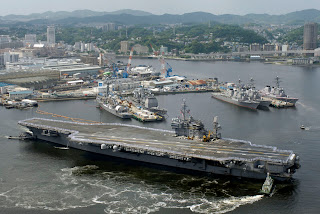 The USS Kitty Hawk (CV 63) departs its home port in Yokosuka, Japan for the final time. The Navy's oldest (and only conventionally-powered) aircraft carrier is being replaced in Far East by the USS George Washington (CVN 73).
The USS Kitty Hawk is heading home.
After 47 years of service--the past decade spent in the Far East--the Navy's last conventionally powered carrier is heading back to the United States for decommissioning. Its replacement as the forward-based carrier will be the USS George Washington, which will arrive in Japan later this summer.
Over its long career, the Kitty Hawk took part in combat operations from Vietnam to Operation Iraqi Freedom. During the 2001 invasion of Afghanistan, the venerable carrier served as a platform afloat for U.S. special forces.
On its homeward journey, the Kitty Hawk is scheduled to stop at Pearl Harbor and its former home port of San Diego, before sailing to the Puget Sound Naval Shipyard in Washington, for de-commissioning.
The ship's future remains undetermined. The state of North Carolina wants to bring the carrier to Wilmington and convert it into a floating museum, alongside the battleship USS North Carolina. That plan would require the state to pay the cost of towing the Kitty Hawk to Wilmington--an estimated $7 million--pay for the vessel's upkeep, and convert it into a museum.
The government of India has also expressed an interest in the carrier. India's Navy would like to acquire a fleet carrier, and has been negotiating with Russia as well. Some analysts believe that India's interest in the Kitty Hawk may be an attempt to gain a more favorable price for the Russian ship, which is newer than the U.S. vessel.
But a final decision on the carrier's fate is still months, perhaps years, down the road. For now, the former centerpiece of the 7th Fleet deserves her moment in the spotlight, as she begins her last journey home.
Posted by Unknown at 10:06 PM