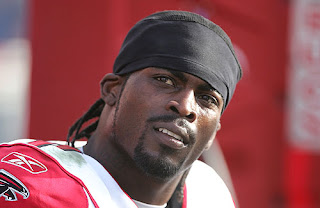 A federal grand jury has indicted NFL star Michael Vick on conspiracy charges, in connection with an interstate dog fighting ring that staged big-money bouts and his personal involvement in the execution of animals that "performed poorly."

Vick, a native of Newport News, VA and a former collegiate All-American at Virginia Tech, was one of four men indicted yesterday by a federal grand jury in Richmond. The Smoking Gun was one of the first websites to publish the 18-page indictment, which describes efforts by Vick and his associates to establish (and operate) a dog-fighting operation on the quarterback's property in rural Surry County, west of Norfolk.

According to the indictment, Vick and the other men used the property to train dogs and host host fights over a five-year period, dating back to 2002. The operation, also known as "Bad Newz Kennels" was also involved in transporting animals across state lines for fights in other locations. The indictment provides details of a number of fights at Vick's property and in other locations; purses for some of the fights were as high as $26,000.

Vick, the starting quarterback for the Atlanta Falcons, was not listed as a participant in some of the dog fights. But the indictment contains plenty of damning allegations about Vick, who went by the nickname of "Ookie." In addition to his purchase of the property, Vick also paid off bets when his animals lost, and participated in the killing of dogs that fared poorly as fighters.

Page 12 of the indictment lists one such episode. In March 2003, Vick, along with co-defendant Purnell A. Peace (a.k.a. "P-Funk") sponsored a female pit bull in a fight with a dog owned by a cooperating witness. After the "Bad Newz" dog lost the fight (and a $26,000 purse), Peace electrocuted the animal, with Vick's concurrence.

More recently, Vick is accused of actively participating in the killing of eight dogs at his kennels. In April of this year (according to the indictment), the Falcons QB, along with Peace and co-defendant Quanis L. Phillips (a.k.a. "Q") executed eight pit bulls that did not fare well in fight "testing" sessions. The three men are accused of using various methods to kill the dogs, including drowning, hanging and slamming "at least one dog's body to the ground."

That event occurred in the same month that authorities conducted their first search of Vick's Surry County property. The search was prompted by the arrest of Vick's cousin on drug charges in nearby Hampton. The cousin--who was not listed in the federal indictment--listed the Surry property as his address. During a search for drugs, authorities discovered more than 50 pit bulls and equipment associated with dog fighting.

While Mr. Vick is certainly entitled to his day in court, it's hard to imagine him walking away from these charges. According to the Norfolk Virginian-Pilot, the conspiracy count carries a maximum penalty of five years in prison and a $250,000 fine. The animal fighting charge is punishable by up to a year in prison and a $100,000 fine.

That's probably chump change to Michael Vick, who received a $130 million dollar contract from the Falcons in 2004. Vick might want to check his investment portfolio, because that's likely the last big-money deal he'll ever receive. Regardless of what happens in court, I don't think companies will be knocking on Vick's door for endorsement deals. After all, most NFL fans are also dog owners, and the idea of training animals to fight to the death is absolutely abhorrent. Vick's career as a pitch-man is over, and we're guessing that sales of Falcons' merchandise--and Vick's famous "7" jersey--will slow considerably in the coming days. Beyond that, there's the question of whether the Falcons will hang onto a talented QB who's on-field performance has tailed off in recent seasons, and may be heading for a stint in federal prison.

Reaction from the sports media has been mixed. Fox Sports on-line columnist John Czarneck says that the Atlanta star has "let down his team, the Falcons' owner (Home Depot co-founder Arthur Blank), and the NFL (Ya think?). He also predicts that new NFL Commissioner Roger Goddell will suspend Vick for at least the first two games of the season. The league doesn't have to wait for the court's ruling, and Goddell has already suspended other players for various offenses. For actively participating in the most repugnant of "sports," we believe that Vick deserves a much longer suspension, especially since he has already lied to the Commissioner about his role in dog-fighting.

A more unvarnished view of Vick--and his "reputation"--can be found in this piece, by Pilot columnist Bob Molinaro. He observes that "Ookie's" career (and image) have been in free-fall for sometime, despite excuses offered by his fans, friends and even some media types. With his indictment by that federal grand jury, we're getting a better picture of the man behind the football hype. And it's a very ugly image indeed.

ADDENDUM: Tuesday's indictment is also a thinly-veiled slap at local authorities in Surry County. As court document indicates, dog-fighting activity began at Vick's property more than five years ago, yet there were no local inquiries until earlier this year. And despite ample evidence of dog-fighting at Vick's home, the local Commonwealth's Attorney, Gerald Poindexter, promised to conduct a deliberate investigation. In early June, he told local reporters that he didn't have a single investigation report in his file, and said he couldn't present evidence to a local grand jury until late July. In the interim, federal investigators conducted multiple searches of Vick's property, interviewed witnesses and returned an indictment--while Gerald Poindexter and the local sheriff twiddled their thumbs.
Posted by Unknown at 7:35 PM

Thank goodness the Chargers traded for Ladanian Tomlinison instead of taking this guy.

I think a lot of NFL owners (and general managers) are saying the same thing. The allegations against Vick are both shocking and sickening. He's about to discover how few friends he really has in the league. You won't see any players pull a "Clinton Portis" and voice support for the guy. Portis isn't the sharpest tool in the shed, but even he realized that you can't support something as barbaric as dog-fighting, and quickly retracted his original comments.

Moreover, I'm guessing that the Falcons' legal staff is reviewing Vick's contract, looking for ways to get rid of him. Vick's on-field numbers are eroding, and there's no way they'll pay the full contract for someone who's become a p.r. nightmare, and may wind up in prison, to boot.

Stick a fork in Mr. Vick, he's done, as far as the NFL is concerned. And BTW, as a Saints fan, thanks for getting rid of Drew Brees. I know the Chargers are happy with Phil Rivers, but Brees was the answer to our prayers, allowing us to get rid of another member of the Vick family, Aaron Brooks.

A Saints-Chargers Superbowl in '08 would be one hell of a game.

Michael Vick's the most overrated football player in the NFL - and one of the most coddled, in terms of the excuses that are made on behalf of this guy.

Sure, Vick's entitled to the presumption of innocence, but take the time to read the indictment - it's sickening and it's damning. If Vick's guilty, he's worse than an animal himself; nothing short of a pure monster. I can think of few practices more barbaric than dog fighting. It's extremely disturbing that Vick worths million and he and his compatriots can find nothing more substantial or of interest to themselves with which to invest their personal time and money than - of all things - dog fighting. One really has to be a cipher, devoid of humanity, to have been blessed with material riches of this kind and choose to live an existence of this type.

Kudos to the authorities for not only taking the crimes of dogfighting and animal cruelty seriously, but pursuing the case against Vick with rigor. It remains to be seen whether Vick will be found guilty and, if he is, whether he'll be sentenced to the maximum penalty of six years in prison. I wonder what action the Atlanta Falcons and the NFL will take - will they take this as seriously as the federal government has? Will a morality clause - if there is one in Vick's contract - be exercised? I'm willing to bet this is the beginning of the end of Vick's career in Atlanta, and possibly in the NFL as well.

Angevin--I'm certainly not an attorney, but virtually all big contracts for entertainers, sports figures, even CEOs, contain some sort of morals clause, which can give the employer a quick way out, in the event that the employee violates that clause. Sponsoring a barbaric dog-fighting ring certainly falls into that category.

As far as handing out kudos, the only credit belongs with the feds, and to a lesser degree, with state officials. The locals have been an embarassment, particularly Mr. Poindexter. It's abundantly clear that he had no interest in going after Michael Vick, and some local reporters are looking into allegations (as yet, unconfirmed), that Mr. Poindexter might have received tickets for Falcons games. Again, I must emphasize that those charges have not been substantiated, but Poindexter is an embarassment as a prosecutor.

Final thought: if the Falcons don't dump him sooner, a jail sentence for Vick should be enough to void his contract, once and for all

Spook, I would love to see a Chargers-Saints Superbowl. Just a little history. The Chargers had the number one pick that year and were going to take Vick. Instead, they made a brilliant trade with Atlanta to trade down to number 5. We got a bunch of draft picks, LT and Drew Brees. That trade is looking better today.