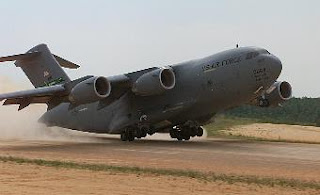 Three members of the Senate claim that the Pentagon may have violated acquisition rules, by encouraging Boeing to order additional parts for its C-17 Globemaster III cargo aircraft, in anticipation of future orders.
In a recent letter to Defense Secretary Robert Gates, Senators John McCain of Arizona, Edward Kennedy of Massachusetts and Tom Carper of Delaware questioned whether Boeing's decision was prompted by Air Force suggestions that it will buy more C-17s.
According to an AP report (posted at Forbes.com), the aircraft manufacturer confirmed on Tuesday that it has restarted its C-17 production line, but not on assurances of additional Air Force orders. Boeing is under contract to build 190 Globemaster IIIs, with the last delivery now scheduled for 2009.
A Boeing spokesman said the company made the decision entirely on its own, "based on strong bipartisan congressional support for continued C-17 procurement last year and again this spring, and on congressional testimony by Air Force officials that they would consider procuring 30 additional C-17s, if Congress allowed the Air Force to retire a number of older, unreliable C-5s."
And that brings us to an rather interesting side-bar on the C-17, which may explains the real motivation behind that letter to Mr. Gates. Look a little closer, and you'll see lots of personal (and local) politics in that missive to the SecDef.
Let's begin with John McCain. His animus toward Boeing (and Pentagon acquisition officials) is well-documented, dating back to the Darlene Druyun scandal. Ms. Druyun, the Air Force's former top civilian contracting officer, pleaded guilty to conspiracy charges, after approving a higher price in Boeing's KC-767 tanker bid, and arranging employment with the defense contractor for herself and other family members. Druyun was sentenced to nine months in prison and has since been released. Simply stated, Senator McCain doesn't trust Boeing, and routinely questions bids and proposals submitted by the defense contractor. We're guessing that it didn't take much to convince McCain to sign that letter.
As for Senators Kennedy and Carper, their interests are a bit more parochial. You'll note that potential orders for more C-17 hinge on the Air Force being able to retire older C-5 transports with poor maintenance and operational records--described by the service as the "worst actors" in the fleet.
Let's see, name two Democratic Senators with C-5 units in their home states. (Cue the "Final Jeopardy" music). If you guessed Kennedy and Carper, give youself a gold star and move to the head of the acquisition class.
Delaware is the home of Dover AFB, one of the service's most important mobility hubs, and an obvious priority for Senator Carper. Dover has both an active duty airlift wing (the 436th, which is transitioning to the C-17) and a reserve unit (the 512th Airlift Wing), which will operate both C-5 and C-17 aircraft. Under that plan, a total of 18 C-5s are scheduled to remain at Dover; the proposed retirement of additional Galaxy airframes could spell a funding decrease at Dover, and the loss of additional jobs. No wonder Senator Carper is upset.
Ditto for Ted Kennedy. The Air Force Reserve also has a C-5 unit at the Westover Air Reserve Base in Massachusetts (the 439th Airlift Wing), which operates and maintains 16 of the massive airlifters. Additionally, the Air Force recently selected Westover as the national maintenance and inspection center for all C-5 aircraft assigned to reserve units. That means more defense dollars for the base, lots of high-paying civilian jobs for the Westover community, and increased revenue in the local economy. Retirement of poorly-performing C-5s--mostly among reserve units--would be a major blow for one of Kennedy's favorite military installations.
Naturally, you won't read anything about the pet projects of personal whims of the three senators in stories about their correspondence to Mr. Gates. But rest assured: John McCain's dislike of Boeing played a role in the letter, as did the desire of Tom Carper and Ted Kennedy to protect C-5 units in their home states.
Meanwhile, the Air Force--and the rest of our military--could really use 30 additional C-17s to meet current operational and airlift missions. But getting those airframes means retiring poorly-performing C-5s, and that promises to be a tall order, given John McCain's suspicion of Boeing, and the efforts of Senators Carper and Kennedy to preserve C-5s, and the jobs that go with them.
We'll go out on a limb, and predict that this "problem" will be solved if the Air Force promises to "split" the additional C-17s between Dover and Westover. That won't necessarily placate Senator McCain, but we're guessing that the opposition of Kennedy and Carper will suddenly disappear, in a flood of new aircraft, more jobs, and lots of military construction dollars.
Posted by Unknown at 4:27 PM

Well, I spent a lot of time broken down in various crapholes waiting for C5's got get repaired.

As a key logistics link, it behooves us to acquire and use more reliable
"trash haulers"