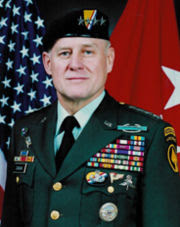 In five decades of public service, General Wayne Downing accomplished something that is rare in the armed services. He became a hero in the Army (and the special operations community), while earning near-pariah status within the U.S. Air Force.

General Downing, who died Wednesday from meningitis at the age of 68, will be rightfully remembered as a "warrior's warrior," a man who helped build American special operations forces (SOF) into assets that are respected and feared by our adversaries around the globe. At the time of his retirement from active duty in 1996, Downing was the nation's "chief snake eater," commander of U.S. Special Operations Command, the capstone assignment of his long career as a shadow warrior. A Washington Post profile recounted the general "fast-roping" with other Rangers into a West Point pep rally in 1995--at the age of 55. In later years, General Downing also served as an advisor to the Bush Administration, helping develop counter-terrorism strategies in the wake of 9-11.

But Downing will also be remembered as the point man for one of the most controversial investigations in recent military history--the 1996 probe into the terrorist bombing at Khobar Towers in Saudi Arabia. In his report on the blast that killed 19 airman, General Downing placed most of the blame on Air Force Brigadier General Terry Schwalier, the wing commander on the scene. Later reports clearly debunked Downing's conclusion, but his report formed the basis for later decisions that derailed Schwailer's career, and prompted an early retirement by the Air Force Chief of Staff.

Downing's appointment to lead the investigative task force was made by then-Defense Secretary William Perry, and it came only days after the explosion. As reporter Matt LaBash later described in a seminal Weekly Standard article on Khobar Towers and its aftermath, the incident almost immediately took on a political tone. Congressional Republicans saw an opportunity to use the bombing against the Clinton Administration, demanding that someone be found culpable. Against that backdrop, Downing was dispatched to conduct his inquiry, and report back to Mr. Perry in only 60 days.

Matt LaBash also discovered that the Clinton team did little to insulate Downing and his task force from the growing political storm. Instead, Mr. Perry's staff relayed Congressional "concerns" to General Downing, which resulted in a changing focus for the investigation:

As early as July 10, a days after the first Khobar hearings, Perry instructed Downing that, "as a result of high Congressional interest, we must expedite portions of your assessment process. Downing should include in his report, Perry said, "what U.S. official(s) were responsible for actions to improve or upgrade the [perimeter] fence.

The Defense Secretary also told South Carolina Senator Strom Thurmond that Downing was empowered to explore accountability, and that the retired General "fully understands what is expected of this assessment."

Downing told LaBash that Perry never made any informal demands on the investigation, and that he "resisted" efforts by SecDef staff members to "insert themselves into the assessment. But when his report was released on September 16, 1996, it clearly faulted General Schwalier, citing him by name, and ruling that "he did not adequately protect his forces from a perimeter attack."

That determination stunned military officials. Sources told LaBash that Downing had assured both the CENTCOM commander, General A.B. Peay, and the Air Force Chief of Staff, General Ron Fogleman, that he was finding nobody culpable, including Schwalier. Downing disputed that claim, although General Peay confirmed that he received such assurances from Downing. Interestingly, the Downing task force arrived at their conclusion after spending only seven days in Saudi Arabia, the despite the fact that the massive truck bomb was detonated outside the base perimeter, and documented efforts by Schwalier to improve security at his base.

Equally damning was a second inquiry into the bombing, headed by Air Force Lieutenant General James Record. Unlike the Downing team (which focused on regional security issues and the bombing attack), General Record was allowed to concentrate solely on the Khobar Towers incident. Using the work of the first task force as a starting point, Record's team conducted another 207 interviews and reviewed transcripts of the 200 interviews conducted by the Downing team. Record also allowed General Schwalier to provide a point-by-point response to the Downing report, which highlighted 37 incorrect statements, 61 misleading implications and 23 contradictions.

In his assessment, General Record concurred with many of Downing's recommendations for improving force protection, but sharply disagreed with its criticism of General Schwalier. As Matt LaBash wrote, the Record investigation "issued a strong rebuke to the Downing findings, saying that the desire to deliver quick results had caused individuals to be "unfairly and publicly criticized as being derelict in their duties." He also notes that Schwalier was exonerated a second time in a subsequent investigation by the Air Force Inspector General and Judge Advocate General.

After months of slow-rolling and internal debate, disposition of the Khobar Towers incident fell on the new Secretary of Defense, William Cohen, who replaced Perry in early 1997. Cohen's own, subsequent report was based heavily on Downing's findings. Both Cohen and Downing faulted General Schwalier for failing to protect his installation from outside attack, despite the fact that (a) the bomb was detonated in an area under the jurisdiction of Saudi security forces; (b) the Saudis had been previously unwilling to let the U.S extend the defensive perimeter at Khobar, and (c) Schwalier's unit had already implemented an impressive number of security improvements at the facility, while flying daily combat missions over Iraq.

In the end, Cohen decided that Brigadier General Schwalier was culpable, ignoring more detailed reports that proved otherwise. Cohen also rescinded Schwalier's promotion to Major General, claiming that it was justified in light of the casualties we suffered. "For me to face the parents of the 19 who died, and to say everything that reasonably could have been done was done--I don't believe that's the case," he told the New Yorker.

But Matt LaBash discovered that the Defense Secretary's claims were specious. Pentagon spokesman Ken Bacon, told the Weekly Standard that Cohen had never been in contact with the families of the Khobar victims. Indeed, some family members interviewed by LaBash reported that they had written letters to the Mr. Cohen in support of General Schwalier. Those letters were obviously ignored, and Schwalier retired a few months later, his career ruined.

The Khobar bombing claimed another casualty with the early depature of General Fogleman. On July 28, 1997, the Air Force Chief of Staff requested early retirement, and the Schwalier decision was clearly a factor in his decision. He described his frustrations in an interview with former Air Force historian Dr. Richard Kohn, printed in the Spring 2001 edition of Aerospace Power Journal:

As Fogelman concluded: "I simply lost respect and confidence in the leadership that I was supposed to be following."

More than a decade later, the mention of Khobar Towers and the Downing Report still leaves a sour taste in the mouths of many airmen--and rightfully so. By rushing to judgement in the aftermath of the bombing, and (apparently) acceding to political pressures, General Downing produced an assessment that was both inaccurate and unfair, destroying the career of an exceptional officer in the process. Downing was, by all accounts, a brave and thoroughly honorable man, and a gifted military commander. But his flawed report on Khobar Towers remains a dark stain on his record of service to our nation.
Posted by Unknown at 9:04 AM

Thank you for your succinct review on the KT aftermath. GEN Downing was the consumate SOF soldier and it's a shame that the rush to judgement demanded by the civilian "leadership" ended in such a debacle. Anyone with experience knows that military investigations are long, drawn-out affairs as every jot and tittle gets it's due.

You could put this on the SOF mentality of "snap-judgements under field conditions are a necessity" but perhaps this means that SOF field commanders should leave the tediousness of investigations to the more plodding souls with a love for administrivia.

Of course, the AF was shooting itself in the foot on an almost daily basis as we went through TQM, a series of RIFs, stagnant promotion boards, etc. The mentality at the time was that it was a "one-mistake" AF, notwithstanding OERs and EPRs full of "atta-boys." -cp

Pizza--Appreciate the kind words. It's difficult to write such a post about Gen Downing because he WAS a consummate warrior and professional. It's hard to believe that he would allow the political hacks to put him in such a spot. However, I believe his willingness to accept the assignment was a reflection of his dedication to service, and a desire to prevent such attacks in the future.

Still, Downing should have realized that 60 days was an insufficient time to conduct a proper investigation of Khobar Towers, let alone address the "regional" concerns that were included in his mandate. In hindsight, General Downing should have requested more time, or a more narrowly focused investigation. As noted in the post, Lt Gen Record's inquiry provided a more balanced assessment of what happened at KT, but it was ignored, largely for political reasons.

Additionally, your comments about a "one mistake" AF are spot-on. I also lived through that era, and the didn't exactly cover itself in glory. And yes, that includes General Fogleman. Much has been made of the accountability he demanded in the wake of the Blackhawk shootdown, but that belies Fogleman's greatest leadership failure, IMO. Of all those who participated in the Blackhawk debacle, only one officer--an AWACS controller--faced court-martial charges. He was eventually acquitted, in a decision that I view as courageous. The court-martial board concluded (quite correctly) that other people belonged in the dock, and they refused to make the lone controller (Capt Jim Wang) a scapegoat.

Your observation "the bomb was detonated in an area under the jurisdiction of Saudi security forces" seems to me to be the entry key to understanding how this tragedy could have happened. My son did a deployment to SA and was there, but in a different city, when KT was attacked. His unit was also housed off base in "civilian" quarters. I served 22 years in the AF and found these arrangements highly unusual, a situation I had never encountered or heard of before. I still do not understand why the AF did not have its personnel living on the bases where they worked and where security would be in the hands of the AF, not host country forces. Even if they had to be housed in temp facilities, at least they would be secure. People in the Pentagon and/or the State Department had to be involved in the decision to house these troops off base. I strongly suspect this decision was made to please the Saudis, and perhaps to fatten the wallet of whoever owned KT and Eskan Village where my son was housed. Why was there no investigation to find out who made this crucial decision and why it was made? Surely, whoever it was must share a very large part of the blame for what happened.

I briefed "the WAD" in Haiti as a CA Captain and he is the godfather of a good friend of mine.

I can easily visualize the circumstances of the Khobar investigation and the inherent biases Army SOF guys have against the Air Force. Especially pre-9/11. I also know the WAD had a very low tolerance for BS.

Right or wrong. Someone has to be held accountable. In the Army world, it's the commander who is responsible for everything that happens under his command, period. That's the mentality that the WAD conducted his investigation.