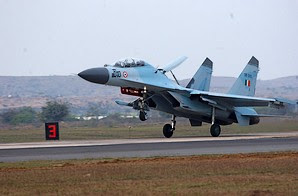 According to the Jerusalem Post, Israeli intelligence is investigating reports of a pending arms deal between Iran and Russia. If those reports prove accurate, then Tehran may be negotiating the purchase of up to 250 SU-30 Flanker strike fighters from Moscow. It would represent the largest arms deal in Iranian history, and provide enough airframes to replace Iran's existing inventory of U.S.-made F-4s, F-5s and F-14s, as well as Russian-built SU-24s.
As we've noted before, the Iranian Air Force is in serious need of new aircraft. Largely due to crew availability, the 30-year-old F-4 remains Iran's primary front-line fighter, supplanted by smaller numbers of F-14s, F-5s and Russian MiG-29s. But Tehran's entire fighter fleet suffers from serious maintenance and parts problems, restricting operational readiness.
For example, Iran is now the world's only operator of the venerable F-14 Tomcat, and recent steps by the U.S. have further curtailed parts availability, even on the black market. Countries that still fly the F-4 and F-5 are also retiring those airframes, meaning that parts for those jets are increasingly scarce as well. The MiG-29 is much newer, but unlike American manufacturers, Russian aviation firms don't include a comprehensive support package as part of the deal. Parts and maintenance are "extras," and Iran's relatively low mission-capability rates for its MiG-29s suggests that Tehran (predictably) scrimped when it acquired those Fulcrums.
Beyond that, there's the issue of who will actually fix the jets once they join the inventory. Iran's cadre of experienced F-4, F-5 and F-14 mechanics are reaching retirement age, or they were purged by the clerics years ago. While fourth-generation jets (like the SU-30) are easier to maintain, it takes mechanics and crew chiefs a while to become proficient on their new aircraft. Support from the manufacturer (Sukhoi) could certainly ease that transition, but that level of assistance comes at a price--one that Iran has refused to pay in the past.
That's why we're a bit skeptical of the reported arms deal. Buying 250 Flankers, even over a period of time, is an expensive proposition. And despite high oil prices, Iran's economy is under a severe strain right now, making it even less likely that Tehran will commit--let alone, follow through, on an arms deal worth $75-$100 billion, dwarfing the combined value of of the recently-announced U.S.-Saudi arms deal and projected military support to Israel over the next 10 years.
The leak of this Israeli intelligence inquiry is hardly surprising, given Tel Aviv's concerns about the Saudi arms purchase. By highlighting the reported purchase, Israel could pressure the U.S. to provide additional military aid in the years to come. The long-range SU-30 poses a potential threat to Israel, particularly if IL-78 Midas tankers are part of the package.
But that poses another challenge for Iran. Developing even a modest, long-range strike capability against Israel will require months (even years) of training after the Flankers and tankers arrive in country. At the present time, long-distance training flights (with air refueling) remain exceptionally rare in the Iranian Air Force, suggesting that tactical capabilities in that area are low to non-existent.
Additionally, there's the question of when Russia might be able to deliver the jets. At the recent Paris Air Show, a Sukhoi rep told reporters that his company has orders for 242 SU-30MKs, scheduled for delivery to India, Algeria and Algeria through 2014. The MK is the basic "export" version of the two-seat Flanker strike variant. India and China are actually purchasing upgraded models (the MKI and MKK variants, respectively) and Beijing's purchase was not included in the figure cited by Sukhoi. However, it is worth noting that both the Indian and Chinese programs have lagged behind schedule. Biarring a major ramp-up of Flanker production, Iran might have to wait in line for its aircraft.
We're not saying that SU-30s won't eventually show up in Iran (although Iran has a long history of backing out of arms deals). But the sheer economics of the purchase, coupled with training, logistics and facilities requirements, makes the scale of the deal unlikely. The eventual size--and price tag--for Iran's Flanker deal should be much smaller than originally advertised.
***
ADDENDUM: Assuming that Iran actually buys a few squadrons of SU-30s, they will pose a much greater (and immediate) threat to U.S. allies and bases in the Persian Gulf, not to mention tanker traffic that uses that key waterway. SU-30 variant are designed to deliver advanced anti-ship missiles, which would (likely) be a key part of any Iranian purchase.
Posted by Unknown at 3:03 PM

In the world of arms dealing, Iran is notorious as a stingy and unreliable customer. We're not just talking about the big ticket item like the Russian fighter jets. They've screwed thousands of middlemen when they backed out of numerious nickel and dime deals (like rifles, artillery, etc). The Russian are fully aware of this reputation and past dealings, and they'll be certain regarding cash delievery.

Big--I've written about this topic in the past; in my personal experience, I've watched them screw vendors/middlemen on contracts worth less than $100K. Given the huge amount of money involved (and Iran's reputation as a customer), I can't see the deal going through, not at the levels touted by Sukhoi and Moscow. Iran may eventually buy a few squadrons of fighters and handful of tankers, but I can't envision them acquiring 250 SU-30s.

And, since Iran doesn't have the capability to co-produce Flankers in-country (as India and China are doing), they must wait in line behind existing customers. That pushes "significant" deliveries of SU-30s well into the next decade, which does nothing to mitigate the short and near-term problems with Iran's Air Force.