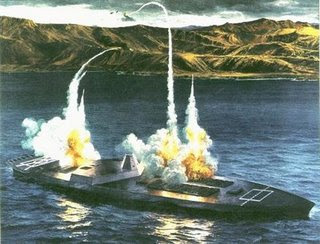 The ship that can't. An artist's concept of the Navy's now-cancelled DDG-1000. Recent information revealed that the sealth "arsenal ship" would be woefully deficient in such core missions as area defense and defending against anti-ship missiles.

Over the past five years, the Air Force has done little to endear itself to members of Congress. From the tanker mess to a series of scandals involving high-ranking officials, the USAF has often found itself in the legislative dog house, and the subject of withering criticism from lawmakers.
To give you some idea of where the Air Force stands on The Hill, consider this quote from a senior Congressional staffer that made the rounds earlier this summer. Speaking with a reporter, the aide openly wondered if the scandal-ridden service would survive as an institution. The comment suggested that if the USAF continued on its present course, Congress might, at some point, decide to give the mess back to the Army.
From our perspective, such speculation is far-fetched, at best. Getting "rid" of an independent Air Force flies in the face of conventional wisdom (not to mention a century of aviation history), and besides, there's no indication that the U.S. Army wants to reclaim the junior service. While getting a bigger piece of the budget pie--and gaining direct control over the close air support mision--would be tempting, those gains would be more than offset by trying to "green" almost 300,000 airmen. Good luck with that one.
If it's any consolation to the Air Force, they may be getting some company in the Congressional woodshed. As reported by the media (and various defense blogs) two weeks ago, the Navy has elected to cancel its expensive DDG-1000 program. At an estimated $5 billion a copy, the "stealth" destroyer was almost as expensive as an aircraft carrier, and bigger than a World War II heavy cruiser.
When the cancellation was announced, the Navy attributed the decision to rising costs, and the availability of a proven alternative, say an upgraded Arleigh Burke class DDG. After spending upwards of $13 billion on the DDG-1000, the Navy decided to call it a day, and go with something a little more affordable.
But, there's a little more to this story that budgetary factors. In recent days, we've learned the real reason behind the USN's decision: the super-sophisticated destroyer cannot peform area air defense, or other, essential, blue water missions. Here's how a senior naval officer, Vice Admiral Barry McCullough, summarized the problem (H/T to Information Dissemination and the Danger Room):
The DDG-1000 program is developing a capable ship which meets the requirements for which it was designed. The DDG-1000, with its Dual Band Radar and sonar suite design are optimized for the littoral environment. However, in the current program of record, the DDG-1000 cannot perform area air defense; specifically, it cannot successfully employ the Standard Missile-2 (SM-2), SM-3 or SM-6, and is incapable of conducting Ballistic Missile Defense.
Admiral McCullough went on to say, in so many words, that the DDG-1000 is terrific at supporting littoral warfare--just don't ask the ship to support the air defense mission, or defend itself (or other ships) from sea-skimming missiles.
And, it gets better. For at least three years, various Navy officials have been telling Congress that DDG-1000 is not only equal to Burke-class vessels in those missions. So, you can make a compelling case that the USN has been lying to our elected representatives--and the American public--delivering what Galhran at Information Dissemination calls a "lunchbag of bulls--t" on the vessel's capabilities.
Move over, USAF, and make room in the doghouse for Vice Admiral McCullough and a bunch of his fellow flag officers. Repeatedly deceiving Congress is not exactly an enhancer for a career, a program, or a military service. Reverberations from the DDG-1000 decision are going to be felt for months to come.
Posted by Unknown at 2:10 PM

Have you commented on the changes in the Army's promotion policy? I may have missed it but I read you regularly.There is and article by Kaplan at Slate here: http://www.slate.com/id/2196647/

I would expect you might have a more inside view and insightful view.

It is sad that instead of incremental improvement and design that we get far out stuff that just doesn't work. If the technology was there then it would be a different story, but technology development in conjunction with ship building has rarely worked. The Navy will have to eat the egg off its face for over-reaching in the time of budget constraints.

It has always seemed to me that the Navy never knew quite what it wanted to do with these ships. Quite aside from "the jack-of-all-trades, master of.." issue (anti-sub, anti-air, stealthy, with a gun for fire support, etc)...just looking at the things, even a layman like myself has to wonder what the Navy's thinking.

They call it a "destroyer" -- but it's 14,000 tons, as big as a cruiser, and as expensive in real constant dollar terms as a battleship. They want them to do everything, but they're so flippin expensive that nobody valuing his naval career would think of risking them by getting them near anything that even smelled like trouble.

I think they wanted too much out of this thing. One ship type is not going to fit all. I think they need a few big cruiser/battlecruiser type ships that have the multi-mission capabilities the Zumwalts were supposed to have -- but on big enough platforms to carry them (30,000 tons or something); and then plenty of smaller type ships -- real destroyers, differentiated by role.

The problem with both they AF and USN is that they are run by politically adept procurement oriented bureaucrats who want to build increasingly complex (and expensive) weapons systems to fight an enemy that surrendered 20 years ago. They have no strategy for contributing to our present conflict.

The Army had the same problem until it was demonstrated to them that things had changed by the war in Iraq. Oneof Bush's problems is his loyalty to incumbents like Tenet. Petraeus is really the first post 9/11 military leader we've had. The AF is opening up slots, but it's not clear they have qualified replacements. We'll see. At least it appears Roughead is behind killing the DDG 1K.

With so many committees, sub-committees, consultants, analysts, study groups, hangers-on, wanna-bes, kibbutz-ers, and what-not, how in the world did this abomination make it out of design? Anybody who's ever played "group kick the can" know you protect (defend) your own back yard before you go out seeking the other guy's can.... and here we have a 3 billion can left open to the sneaky S.O.B with the low tech close in missile. They forgot to defend their "back yard" (close in area) to current threats. Huh. Does this fall under "Oops, didn't think about that"?

The Navy's problem is this:

They need to have CVBGs out to maintain sea dominance. They need littoral gunboats to provide fire support to troops ashore - which is very relevant to current operations, Mrs Davis. They need dedicated escorts that can shoot down missiles and protect other ships. All of these things are perfectly reasonable missions for our Navy, but the funding is not there for multiple ships.

The whole idea of the US military is that is unacceptable to be surpassed. Why do we need an F-22? To maintain air dominance. Now, the whole idea behind the littoral destroyer was to do the same thing as the F-22, to dominate its zone. Now I'm sure no one here would begrudge the Raptor, even though it is not incremental and has a staggering pricetag. If the LCS had lived up to its goal, then I would hope we would be hearing cheers as opposed to jeers.

You are correct of course, Omega P, but, if we know what is good for us and for our children, it is not acceptable that the funding is not there.

If we need multiple types of ships and F-22's, we must, at all costs build as many as needed, and raise the taxes to pay for them, cutting back on other attractive commodities as necessary. If we do not build them, others will certainly do so, and they will restructure the world in ways that neither we or our children like.

The world runs on American terms because we have paid both in blood and treasure for it to do so, but that is a fungible and perishable asset, and the world will be managed by other hands as soon as we quit paying for it.

We will pay the consequences of losing primacy, financially and otherwise on terms us and ours will forever regret.