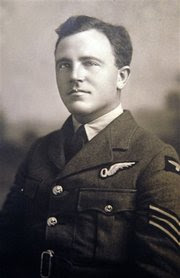 RAF Navigator Eric "Digger" Dowling, one of the leaders of "The Great Escape" from a German POW camp in 1944. Mr. Dowling passed away last month, at the age of 92. His death was confirmed this week (AP photo).


One of the leaders of World War II's "Great Escape" has died. Former Flight Lieutenant Eric Dowling passed away on July 21st, one day before his 93rd birthday. His death was confirmed earlier this week.

Jill Lawless of the AP recounts Dowling's role in organizing one of the largest mass escapes of Allied airmen from a German POW camp:

Seventy-six Allied prisoners escaped from the Stalag Luft III prison camp on March 24, 1944, in a daring breakout. All but three were recaptured, and 50 were shot on the orders of Adolf Hitler to deter future attempts.

The escape attempt was one of the most celebrated incidents of the war, recounted in a 1963 film starring Steve McQueen and Richard Attenborough.

Dowling played a key role in planning the escape. He forged documents, made maps and was nicknamed "Digger" for his work helping to excavate the three escape tunnels, code-named Tom, Dick and Harry.

Over almost a year, prisoners surreptitiously dug the tunnels 30 feet (9 meters) underground, shored up with bedboards and wired with stolen electrical wire. Tom was discovered by guards and Dick was abandoned, but the 300-foot (90-meter) long tunnel Harry was eventually completed.

Dowling was not among the more than 200 prisoners chosen by lottery to make the escape attempt on the cold and moonless night. By the time German guards discovered the breakout, 76 men had crawled free.

While Dowling's leadership made him a prime candidate for the escape attempt, poor luck in the escape lottery likely saved his life. The Gestapo moved ruthlessly against the escapees, executing two out of every three airmen who fled the camp.

According to Dowling's son, the former RAF navigator was less-than-enthused over Hollywood's version of the escape effort. The 1963 film "The Great Escape" gave too much credit to American fliers (from Dowling's perspective), and he believed the final sequence, with Steve McQueen trying to jump a motorcycle over a border fence, was "simply over the top."

Dowling was on his 29th mission as a Bomber Command crew member when he was shot down in April of 1942. The escape attempt occurred almost two years later, after months of effort by Dowling and his fellow POWs.
Posted by George Smiley at 5:25 PM