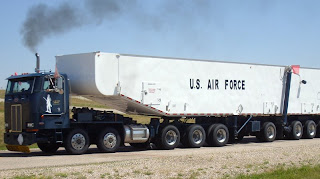 An ICBM transporter, like this one, toppled into a ditch in North Dakota on Thursday. The vehicle and its crew are part of the 91st Space Wing at Minot (USAF photo via Air Force Times)

A massive Air Force transport and erector vehicle, carrying a 30-ton ICBM booster, may be stuck in a North Dakota ditch for up to a week before recovery operations can be conducted.
Sources at Minot AFB tell In From the Cold that the vehicle will not be moved until sometime next week, after the first phase of an investigation is completed, and soil conditions improve.
The transport vehicle, en route to a Minuteman III missile silo, tipped over late Thursday afternoon on a gravel access road, about 70 miles southeast of Minot, near the towns of Parshall and Makoti. The missile, the transporter and its personnel are part of the 91st Space Wing at the North Dakota base.
Air Force spokesmen emphasized that nuclear weapons were not involved in the mishap. Missile warheads are transported separately to the site, and mounted after the lower stages are placed in the silo.
The mishap also posed no danger to the public, according to Minot's chief public affairs officer, Major Laurie Arellano. She told Air Force Times that base and local officials responded to the accident. A security cordon has been established around the vehicle and will remain in place until it is recovered.
The Minuteman III's solid fuel remained inside the booster and did not pose an environmental hazard, according to the Air Force. A small amount of diesel fuel from the transporter was spilled in the accident and clean-up operations were underway.
Major Arellano said the transporter's crew suffered only minor cuts and bruises in the accident.
A team from Washington, D.C. arrived at the base on Friday to assist with the inquiry. Experts from Air Force Space Command Headquarters in Colorado will also participate in the inquiry, which is expected to take several weeks.
While the cause of the accident is still under investigation, the early focus is on the condition of the access road. A security official who had been briefed on the incident said the road had apparently washed out after recent, heavy rains. As the heavy transport rumbled toward the silo, the remaining surface gave way, sending the vehicle--and its cargo--into the ditch.
At this point, it's unclear why the transporter crew attempted to drive along damaged road. The movements of nuclear missile components are carefully planned, and require the authorization of senior officers, up to an including the wing commander.
According to the security official, someone in the operation should have checked the access road's condition before the transporter began the final leg of its journey. Instead, the movement continued, and the vehicle wound up in the ditch.
"The real question is who authorized the movement of a critical asset down a washed-out road," said the official, who spoke on the condition of anonymity.
Thursday's mishap is the latest involving nuclear systems at the North Dakota base. Last August, a B-52 mistakenly carried six nuclear-tipped missiles between Minot and Barksdale AFB, Louisiana. That incident prompted a series of investigations and the dismissal of five commanders at the two installations.
Since then, Minot's 5th Bomb Wing (which was involved in the transfer incident) and the 91st Space Wing have endured a series of inspections, aimed at ensuring compliance with nuclear safety, handling and accountability procedures.
Over the past seven months, the bomber unit has earned low marks on a pair of inspections, although it regained its nuclear mission certification. The 5th Wing lost its certification after last year's accident.
The 91st Space Wing, responsible for the ICBM mission at the base, earned a failing grade for security during a "routine" nuclear surety inspection early this year. However, inspectors for Air Force Space Command--who also participated in the evaluation--disagreed, and the wing retained its mission certification.
Missile transporters, like the one involved in Thursday's accident, are used to move Minuteman III airframes between launch silos and the base. The silos are located in clusters of 10, linked to a nearby launch control facility, manned by two missile officers. They would be responsible for launching the ICBMs, at the direction of the national command authority.
Raised to a vertical position, the transporter is capable of lowering the missile into a silo, or removing it for maintenance.
Posted by Unknown at 7:24 PM

I wonder what the comparative funding per warhead is for maintenance, training and infrastructure of the USAF and USN branches of the United States nuclear weapons forces.

I can envision this:

Sir, we are ready to transport.
Officer: Roll them.
Driver of transport: Man this road is the shits, who said we should do this today?
Officer on the Radio: What the hell is the hold up, get a move on!!
Driver: Oh well, hold on to your ass!!

Been there done that. Road Recon is a must in any convoy. Driving down it in a Hummer not knowing your ass from the proverbial hole in the ground ain't the way to do it. But who knew Officers weren't trained in road construction and road hazards?

This officer and those under him are in a world of hurt. Watch them try and blame the driver.

Picture of the Transporter in the WaPo showed no sign of road degradation. The tracks from the vehicle show no digging into the road, just straight, drifting lines to the ditch.

My money is on the driver falling asleep or going too fast, common happenings in the 2M0 world.