The Air Force has offered up a few more clues about its next bomber, set to join the service in 2018.
At a presentation in Washington yesterday, a senior Air Force official said that extensive analysis indicates that a "manned, subsonic bomber aircraft" is the best option to pursue for the service's long-range strike requirement.
"Our analysis shows that the best value and the one that meets the requirements in the mid-term, the 2018 time frame, would, in fact, be for a new concept bomber," Maj. Gen. Mark Matthews, director of plans and programs for Air Combat Command (ACC).
Matthews said the ACC-led study determined that the platform should be manned and subsonic. It is also envisioned to possess advanced stealth characteristics to penetrate hostile airspace, operate in that environment for extended periods and survive in the face of sophisticated air defenses, he said.
"It has to have the ability, in denied airspace against very capable air defense systems, to survive and persist on that battlefield," he said of the new bomber. "We are talking about the embedded capability to survive."
The service's preference for a manned aircraft is hardly surprising. As a service run by pilots, the Air Force has long espoused a need for men (and women) in the cockpit, despite the steady evolution of unmanned aerial vehicles (UAVs) and associated technology. The new aircraft will most likely have a two-person crew, similar to the B-2.
According to Defense Daily (subscription required), the service plans to spend $333 million on developing the new bomber through Fiscal Year 2013. However, in an era of tightening defense budgets, there are no guarantees that the new bomber will move steadily toward development and operational deployment. The Air Force has identified the bomber as its fifth most-important acquisition program, ranking behind such platforms as the F-22, the Joint Strike Fighter, and the CSAR-X helicopter. And, with the Army and Marine Corps demanding more funds to buy new hardware, expand their ranks and repair damaged equipment, it's easy to envision some lean funding years for the new bomber, and possible delays in its introduction.
However, there is little doubt about the need for some sort of new, long-range strike platform. While the venerable B-52 is expected to soldier on until 2040, but other bomber platforms--notably the B-1B Lancer--may face retirement sooner, mandating the need for a replacement.
But the development clock is ticking. At this point, the service--and prospective contractors--have roughly a decade to develop and test the new bomber, which is still years away from the first full-scale mock-up, let alone a flying prototype. The revolutions in computer-aided design, precision manufacturing and simulator testing will accelerate the development process, but the designated time line suggests a bomber that will be evolutionary in its design and capabilities, rather than evolutionary. Requirements dictate that the aircraft "would have the capacity to carry in the range of 14,000 pounds to 28,000 pounds of ordnance and would have to have a range in excess of 2,000 miles unrefueled," according to General Matthews. The new bomber is also expected to incorporate low-observable technology for improved survivability and advanced sensors/munitions to increase its lethality.
In terms of performance, the bomber must be able to "hold at risk any potential adversary--regardless of where they area" Matthews said. That includes the ability to locate and attack deeply-buried facilities and fleeting targets, like those associated with enemy WMD programs, air defense networks, or even terrorist organizations. But the real bottom line for the new bomber is going to be its price tag. The last Air Force bomber (the B-2) costs almost $1 billion a copy, a major reason the service bought only 21 of them. To purchase more copies of the new bomber, it's got to be affordable, particularly in the early years of the program when the Air Force will be in the middle of its JSF acquisition.
Recent conflicts in Iraq and Afghanistan have again demonstrated the value of bomber platforms. With the recent JDAM upgrade, bombers can now match fighter fighters in terms of precision, while greatly surpassing their capabilities in range, endurance and persistence. Still, I'm not completely convinced that a new manned bomber is the definitive answer for the next long-range strike platform. As the next bomber enters full-scale development (and becomes more expensive), the Air Force may be forced to consider other, potentially more affordable options, including UAVs. 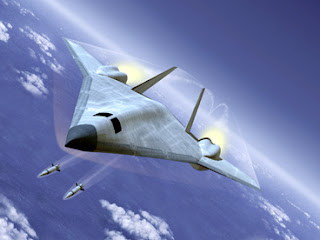 Northrop-Grumman concept illustration of the Air Force's next long-range strike aircraft
Posted by Unknown at 1:39 PM

I don't fully understand, but is there any reason some sort of commercial platform, i.e. a 747 could be obtained and loaded with a bunch of cruise missiles? Might that not be cheaper and workable?

One of the big things with a new fleet of long-range strike aircraft is that something built around the SDB that can carry 28 klbs of payload can actually (at least in theory) hit enough aimpoints on day 1 to actually achieve a proper shock-and-awe systemic breakdown.