One of the more pressing requirements facing the U.S. Air Force is the search for a new tanker aircraft, to replace its fleet of aging KC-135s and KC-10s. While the service currently 588 jet refuelers (114 KC-135Es, 415 KC-135Rs and 59 KC-10s), the E-model Stratotankers are set to retire in the coming decade, leaving the Air Force with only 471 tankers, well below the "minimum" requirement of 520, identified in a recent Pentagon mobility study.

The tanker replacement effort, better known as the KC-X program, is aimed at developing a new aircraft that can not only refuel other aircraft, but also provide a significant airlift capability--in essence, pulling "double duty." There are two contenders for the KC-X contract; Boeing, which is offering a military version of its 767 jetliner, and Northrop-Grumman, which has teamed with Airbus for a tanker/cargo version of its A330 airliner.

As readers of this blog are well aware, the KC-X program has been mired in controversy and scandal. An Air Force plan to lease 767 tankers from Boeing was scuttled by Arizona Senator John McCain, after it was revealed that the service's top civilian acquisition officer, Darlene Drunyan, had favored the contractor, in exchange for promises of jobs for Ms. Druyun, her daughter and son-in-law. Ms. Druyun got what she deserved--a conviction on bribery charges and a nine-month prison sentence--but the scandal created further delays for an aircraft that's needed sooner, rather than later.

Both Boeing and Northrop-Grumman/Airbus have submitted their respective proposals for producing the KC-X, and we'll learn who the winner is later this year. Despite the Druyun imbroglio, Boeing is still believed to have the upper hand in the competition; in fact, Northrop-Grumman threatened to pull out of the competition earlier this year, until the Air Force announced it might award the contract to a "higher-priced offerer," if that aircraft best satisfied the KC-X requirement.

As the service now envisions it, the new tanker will not only surpass the in-flight refueling capabilities of the older tankers, it will also deliver significant loads of cargo and personnel to bases in "contested areas," where a surface-to-air missile threat exists. An Air Force white paper notes that tankers in the CENTCOM area of operations (AOR) "were fired on 19 times" in 2006. With on-board countermeasures--not found on KC-135 variants or the KC-10--the KC-X can, presumably, deliver passengers and cargo pallets to forward locations now served by the C-130 and the C-17, relieving some of the pressure on those platforms.
But that also raises the ages-old question about how much risk the Air Force is actually willing to accept for a very expensive tanker aircraft. One of the "selling points" of the C-17 was its "ability" to deliver critical combat assets (read: M-1 tanks and Bradley Fighting Vehicles) to the edge of the battle area. I even remember seeing some illustrations (commissioned by the original manufacturer, McDonnell-Douglas), depicting tanks rolling off the ramp of a C-17, during an engines-running offload from an assault strip--presumably close to the battle area.
Of course, those "artist concepts" didn't answer the question of how the C-17 was supposed to survive its trip in and out of the battle zone. Presumably, the Air Force had established air supremacy in the region, but there was still the potential, nagging problem of long-range SAMs, and a lesser threat from air intercept. That former threat (coincidentally) will only grow in the coming decades, with further improvements (and exports) of the Russian-made SA-20 system. Newer models of that mobile SAM have a range of well over 100 miles, giving operators the ability to reach across our lines and engage high-value targets--like a KC-X descending into an airfield on Taiwan.
With an on-board self-protection suite, the new tanker will be more survivable in a GWOT environment, but even those threats are hardly static. Presumably, the same terrorists now firing early-model SA-7s and SA-14s at our tankers in Iraq and Afghanistan will eventually upgrade to something more lethal, like the SA-18. Upgrades in self-protection gear will mitgate that threat (to some degree), but the optimal defense against advanced, shoulder-fired SAMs includes a combination of counter-measures, maneuvering, and speed. Obviously, a tanker aircraft will be lacking in those latter departments.
And that brings us back to the real bottom line for the "double duty" KC-X. How much risk are the Air Force (and theater commanders) willing to accept for a key tanker performing its secondary role as an airlifter? With our current shortfall in airlift, it's easy to understand the desire for a dual-role aircraft. But once the KC-X actually enters the inventory, I think the Air Force will be judicious in sending the new tanker into contested areas, particularly as the threat evolves.
Consider the example of the C-17. The service has been somewhat careful in where it flies the $200 million airlifter; yes, it operates routinely in Iraq and Afghanistan, but most of those flights are in and out of major airfields that are heavily protected, with well-established (and wide) defensive perimeters. For more remote deliveries, the military still relies on the C-130 and, to a lesser degree, helicopters. Given the expected cost of the KC-X--and limited purchase projections--it's easy to envision a similar, prudent employment strategy for the new tanker. KC-X will enhance our airlift capability, but mostly to established bases where the potential threat is acceptable.
***
ADDENDUM: Despite the lingering impact of the Druyun scandal, I still believe Boeing will emerge victorious in the KC-X competition. Not only is the 767 in wide commerical service (which means increased availability of common parts), but the airframe is also being used for a number of military applictions. Japan's AWACS are based on the 767, and both the Japanese Self Defense Force and the Italian Air Force have ordered 767 tankers, with first deliveries set for next year. 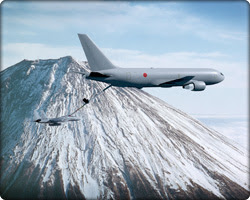 To all readers of this post, I highly recommend visiting a highly informative weblog on this subject. The address is http://kcxtanker.blogspot.com