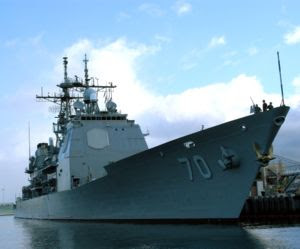 The USS Lake Erie (CG-70), which will attempt to shoot-down a defunct spy satellite with a specially-modified SM-3, surface-to-air missile (U.S. Navy photo via Wikipedia)

UPDATE//AP is now reporting that the shootdown may be delayed 24 hours, due to high seas in the area where the Lake Erie and its sister ships are positioned. The intercept will be attempted tonight only if weather conditions improve. A final decision on today's intercept attempt will be made late this afternoon, by Defense Secretary Robert Gates.

The Navy’s first attempt to shoot down a defunct spy satellite may occur as early as this afternoon, in the skies above the central Pacific.

As the U.K. Register reports, the U.S. military has imposed a large exclusion zone near the Hawaiian Islands. The airspace directive, outlined in a Notice to Airmen (NOTAM) issued on Sunday, bars flights over a 1400 x 700 square mile stretch of ocean, located southwest of Hawaii. According to the NOTAM, the restricted zone covers all airspace in the area, stretching from the ocean’s surface into space. Air traffic will not be allowed to enter the exclusion zone while it remains in effect.

The airspace restriction will be in effect between 0230 and 0500 Greenwich Mean Time (GMT) on 21 February, or 4:30-7:00 p.m. today, Hawaii time. Amatuer satellite trackers calculate that the dead satellite will approach the exclusion zone about an hour after airspace restrictions go into effect. That means the most likely time for the first intercept attempt will be around 5:30 p.m. in Hawaii.

Three U.S. Navy vessels assigned to the shoot-down mission—the cruiser Lake Erie, and the destroyers Russell and Decatur—are already on station, southwest of Maui. Each ship contains at least one specially-modified SM-3 missile, designed to impact the dead spy satellite. The missiles were divided among the three ships to give the Pentagon more “options” for the intercept, in the event of guidance or interceptor problems on one of the vessels.

By slamming an SM-3 into the satellite, the military hopes to limit the amount of debris that survive re-entry, lessening the danger for people on the ground. Officials have expressed particular concern about the vehicle’s large propellant tank, filled with the toxic chemical hydrazine, which used in the satellite’s thrusters. If the tank falls to the earth intact, it could create a dangerous cloud of gas the size of two football fields.

But some analysts believe the hydrazine threat—and the SM-3’s ability to rupture the propellant tank—are overstated. When U.S. officials first announced that the satellite was returning to earth, the Commander of U.S. Northern Commander, General Gene Renuart, downplayed the risk posed by hydrazine. As the NORTHCOM CINC, General Renuart would lead the lead the initial military response to satellite wreckage (and chemicals) that land inside the CONUS.

However, other senior officers have emphasized the hydrazine threat as an impetus for the shootdown attempt. Still, at least one expert believes the chances that toxic propellant will land in a populated area—defined as more than one person per quarter hectacre--are no more than one-half of one percent. The same analyst, geographer Tim Gulden, pegs the chances of debris injuring someone on the ground at no more than “two in one thousand.”

Another researcher, MIT’s Geoffrey Forden, believes there’s about a “three percent” chance that the satellite’s hydrazine fuel will kill or injure someone on the ground (H/T Jeffrey Lewis at the Danger Room). But Forden's calculations consider every place on earth as a potential impact point, despite the fact that the risk, in some locations, is virtually nil.

By any standard, those are very slim odds, indeed. So, why spend $60 million for an attempted intercept that (might) prevent an extremely low-probability event? The real answer may lie in the platform’s sensors and other on-board technology. At the time of its launch in December 2006, U.S. 193 (the designation for the dead satellite) was considered state-of-the-art. It was developed under the ill-fated Future Imagery Architecture (FIA) program, an effort to build smaller and lighter satellites that were less vulnerable to enemy attack.

Due to excessive delays and cost overruns, FIA was cancelled in September 2005 by then-Director of National Intelligence John Negroponte. When U.S. 193 was launched 15 months later, the satellite contract had been returned to Lockheed-Martin, which built previous generations of U.S. overhead platforms. But U.S. 193 is believed to hold advanced technology associated with FIA, providing a potential windfall if sensitive components fall into the wrong hands.

On its present orbital path, the dead satellite makes several passes a day across China and Russia. Beijing is keenly interested in bettering its own spy satellites, and technology from U.S. 193 could help the Chinese improve their overhead sensors. Both Moscow and Beijing would also like to know the capabilities of our advanced imagery satellites--something they might be able to discern by recovering the "right" wreckage.

Intercepting the satellite with an SM-3 missile, the Pentagon hopes to shatter the platform’s sensitive components and puncture its hydrazine tank, reducing the threat of system compromise or toxic exposure on the ground. If the initial shoot-down effort fails--or weather conditions force a delay--the Navy will have a second window of opportunity about 13 hours later, beginning at 5:30 a.m., Thursday, Hawaii Time.
Posted by Unknown at 12:57 PM