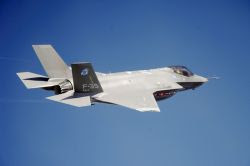 The F-35 Lightning II Joint Strike Fighter (JSF). Under the proposed Air Force budget for 2009, the service would spend $1.8 billion for low-level production of eight aircraft, and long-lead funding for 12 more (USAF photo)

The Air Force is asking for a budget of $143.9 billion in Fiscal Year 2009, with much of that money going toward recapitalization of the service's aging aircraft inventory.

According to Aviation Week, the Air Force budget request represents a seven percent increase over the current fiscal year. Under the proposed spending plan, $41 billion would be spent on modernization and recapitalization, a nine percent jump over Fiscal Year 2008.

While the projected budget won't give the service everything it wants, senior officers expressed satisfaction with the proposal:

We're behind the power curve when it comes to modernization," said Major General Larry Spencer, the assistant secretary for budget.

But, overall, he lauded the spending plan. "This is a good budget. We're getting more money."

The biggest proposed increase for modernization and recapitalization is in research, development, test and evaluation (RDT&E), a $1.8 billion jump to $19.8 billion.

--The KC-135 tanker fleet recapitalization plan, with an initial contract buy of 179 aircraft to likely be awarded this month for an initial deployment date of FY '13. The proposed budget includes $894 million for the tanker in FY '09 -- compared to $114 million this year -- including $62 million for advance procurement of five aircraft.

--The combat, search and rescue (CSAR-X) helicopter fleet replacement, with a contact for 141 aircraft worth about $15 billion for the total buy to be awarded by late summer. The proposed $320 million for CSAR-X in FY '09 -- compared to $94 million this year -- includes $15 million for advance procurement of two helicopters.

--The F-35A Joint Strike Fighter (JSF), with a planned total procurement of 1,763 aircraft. The budget proposal for $3.4 billion in FY '09 includes more than $1.8 billion for procurement, including low-rate-initial-production-3 (LRIP 3) funding for eight aircraft and LRIP 4 long-lead funding for 12 aircraft.

--The new bomber, which is meant to improve the service's long-range strike in three different phases. The proposed FY '09 budget includes $1.04 billion for the first phase, split nearly evenly between RDT&E and procurement.

The first phase in the new bomber effort continues to modernize legacy bombers to improve capability and reliability. Under phase two, the Air Force plans to develop and deploy the next generation of long-range aircraft by 2018. Phase three is scheduled to run to 2035, when the Air Force wants to develop and field its true future fleet.

While funding for the JSF and bomber development is expected to win easy approval, the tanker and CSAR helicopter programs could prove contentious. Bidding for the CSAR-X was reopened after rival firms complained about the Air Force's selection of the Boeing MH-47 as its new search-and-rescue platform. The winner of the revised bidding process is expected to be announced later this summer.

Various Congressional delegations have lined up in support of the three competing firms--Boeing, Sikorsky and Lockheed-Martin. Announcement of the winner may spark acrimony on Capitol Hill, with key members using budgetary measures to deny funding, or keep rejected entrants afloat.

Debate over the tanker program may also be rancorous. Congress is split in support of rival aircraft from Boeing (which has developed a military version of its 767 airliner) and Lockheed-Martin, offering a tanker version of an Airbus jet. With billions of dollars--and thousands of jobs --stake, Congress may attempt similar budget machinations with the tanker program.

Beyond the House and Senate, these controversial programs may also become issues in the presidential race. Arizona Senator John McCain, who is expected to emerge as the GOP nominee, has been outspoken in his criticism of Boeing. McCain led a successful effort to probe contracting irregularities involving company executives and Air Force contracting officials, which resulted in a jail sentence for the service's top civilian procurement officer.

If Boeing wins the CSAR-X and/or the tanker contract, McCain will almost certainly protest, and even use the issues to bolster his reputation as a straight-shooter and crusader. As President, McCain could exert even greater pressure to cancel the programs, or re-open them for bidding once again.

We'll agree with General Spencer's observation that the projected budget is a good one. With its emphasis on modernization and recapitalization, it addresses the service's most pressing issues. But, the defense bill that's ultimately approved by Congress (and signed by the President) may look much different than what the Air Force is proposing, with the CSAR-X and tanker projects most vulnerable for political hits.
Posted by Unknown at 10:49 AM

Doesn't it seem like a waste of money to dedicate even more funds to the JSF program? It has already reached Nunn-McCurdy once and it looks as though the program will break it again.

Wouldn't it be more cost effective to dedicate the funds to another aircraft - one that can be brought on-line much faster and much cheaper until the next generation of fighters are developed. The JSF is merely a half-step and an expensive on at that.

Primarily because there is such an international stake vested in the program the A and B models will go forward. The Navy's carrier-based C variant though is likely on the endangered species list.
- SJS