Moving Towards an Unmanned Bomber 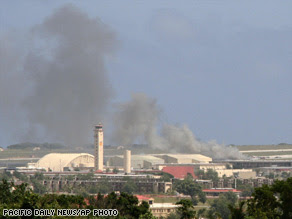 $1.5 billion of your tax dollars, burning in close formation: smoke pours from Saturday's B-2 crash at Andersen AFB, Guam.

Prospects for a new, manned bomber went down in flames (quite literally) with Saturday’s crash of a B-2 at Andersen AFB, Guam. . While both pilots ejected safely, the crash reduces the B-2 inventory to only 20 aircraft. Further losses—considered all-but-inevitable in any military aviation program—will place additional constraints on the nation’s B-2 fleet, and potentially limit employment options in a major conflict with China, or a resurgent Russia.

Admittedly, the remaining B-2s are still a potent striking force. The “Spirit” is the most powerful bomber in aviation history, with a combination of range, stealth and precision-strike capabilities that allow it to travel vast distances, penetrate dense air defenses and deliver weapons with pin-point accuracy. B-2s played a major role in the early phases of bombing campaigns against Serbia, Afghanistan and Iraq. They would represent a critical element of any U.S. effort to target nuclear facilities in Iran.

While the Air Force still has enough B-2s for most scenarios, the Guam crash highlights the dilemma facing military planners. Key elements of various war plans are built around a small number of strategic assets, with decreasing margins for combat losses, or non-availability for other reasons. The U.S. Navy, which one commissioned 24 aircraft carriers of a single type, now has only twelve carriers in all--and that number will drop to eleven with the projected retirement of the USS Kitty Hawk.


Our bomber fleet has experienced a similar decline. Today, the Air Force has a total of 171 heavy bombers (67 B-1s, 20 B-2s, and 94 B-52s). While that sounds impressive—and today’s models are vastly more capable than their predecessors—its worth remembering that the USAF once purchased 744 B-52s and more than 2,000 B-47s.


Ah, for the good ol' days when a strategic bomber could be purchased for roughly one-tenth the cost of an F-22. But, with B-2s priced at $1.5 billion each, and $300 million for a single B-1, we’ll never see a return of the massive bomber units of the 1950s. But it’s equally apparent that the Pentagon can no longer afford relatively small numbers of strategic bombers, no matter how matter how stealthy or precise they might be.


That’s one reason the lost B-2 (nicknamed the Spirit of Kansas) won’t be replaced, and the Pentagon has resisted Northrop-Grumman’s offer to reopen the assembly line. With the Air Force scrambling to finance the JSF, KC-X and CSAR-X programs (to name a few), building more B-2s makes no fiscal sense whatsoever.


Which brings us to the service’s plans for its next-generation bomber, set to appear sometime toward the end of the next decade. As we noted a few months back, the Air Force has asked prospective contractors to develop manned and unmanned versions of the new aircraft. Taking crew members out of the cockpit would save billions in training and personnel costs, while retaining the most desired features of the new platform—range, precision and stealth. That would allow the USAF to buy more UAV bombers, at a substantially lower unit cost.

That’s why the young men and women flying today’s Buffs, Lancers and Spirits may go down as the last bomber crews. Despite their consummate flying skills (including an admirable safety record), there are limits to what the Pentagon can afford, even in an era of $500 billion defense budgets. The sudden loss of a single, billion-dollar aircraft was a sobering moment for the Air Force and defense planners.


In the span of a few seconds on Guam--the time required for the B-2 crew ejected from their stricken aircraft--$1.5 billion in state-of-the-art defense technology became nothing more than expensive debris, and a UAV emerged as the leading candidate for our next long-range bomber.


The era of manned bombers, which began almost a century ago, isn’t over yet. The venerable B-52 is expected to soldier on past 2030, long after current crew members have retired. B-2s and B-1s will also remain a part of our military calculus for years to come.


But the handwriting--or more correctly, the fiscal analysis--is already on the wall. Last Saturday’s B-2 crash may didn't mark the end of manned bombers, but it may represent the beginning of the end.
Posted by Unknown at 1:49 PM

Part of the reason for the massive air-fleets of the Cold War is that we assumed 80% losses before they reached their targets; 40% lost before they even went feet-dry over Siberia. The math is simple; if you need five bombers to guarantee weapon delivery and you have 150 targets, that's 750 bombers.

Note that this planning said nothing about bomber survival post-release.

Halo--it's funny you should mention the post-release issue. Early in my career, I served in a SAC tanker unit. Under SIOP, all of our birds were assigned to generate and refuel various B-52 and FB-111 missions, heading for Mother Russia.

In fact, our crews were under orders to give all of their fuel to the bomber (if necssary), retaining only enough for safe separation before engine flameout. And the KC-135 wasn't much of a glider, so the tanker crews were prepared to sacrifice themselves, if necessary, to give the bombers their needed fuel.

Interestingly, some of our planning documents listed "recovery" bases for the bombers that would be refueled by our tankers. Virtually all of them were overseas, airbases that would be reached after a long flight through Soviet airspace. I don't remember any CONUS bases on the list, since it was assumed that all SAC installations would become smoking holes, courtesy of a Russian ICBM or SLBM.

As you probably know, SAC went through some pretty amazing gyrations to protect/preserve its bomber fleet. In addition to the ill-fated "airborne alert" program of the 1950s and 60s, there were satellite alert locations at selected bases, where bombers were sometimes dispersed. If you ever visit Columbus AFB, Mississippi, you'll find a 12,000 foot runway and a SAC-built alerty facility, capable of handling four B-52s and tankers. Columbus was a satellite alert base for SAC crews for many years.

The problem isn't the cost of the bomber--it is the requirements that the bomber is designed to meet. And those requirements were, to put it mildly, utterly unrealistic.

What we need is a big airframe that can haul a lot of stuff (fuel, ordnance, and enough EW emitters to sterilize frogs at 50 miles) in a cost-efficient manner.

We don't need something that can penetrate an intact IADS as the opening move in a central nuclear war; by the time the bomber shows up, the IADS is mostly vaporized (courtesy of Minuteman and Trident). What's left lacks connnectivity between sensors, commanders, and shooters.