UAVs From Under the Sea 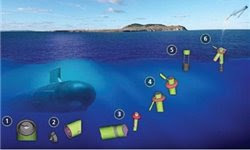 It came from below. A Raytheon artist's concept of how a small UAV will be launched from an attack sub, extending the range of its sensors (Raytheon illustration via Aviation Week).

These days, it seems like everyone wants to get in on the UAV boom--including the "Silent Service," the U.S. Navy submarine corps.
Graham Warwick of Aviation Week reports that Raytheon will conduct a test of a sub-launched UAV off Hawaii in early 2009. It's part of the Submarine Over-the-Horizon Organic Capabilities (SOTHOC) program, funded by the the Office of Naval Research and the Navy's sub force.
Here's how you launch a UAV from a submerged sub:
The concept uses a submarine launch vehicle (SLV) containing the electrically powered UAV and stored on board as an all-up round. Ejected from the submerged submarine's trash disposal unit, the SLV is weighted to descend to a safe distance from the boat, then shed the weight and inflate a float collar.
The collar is pulsed to control the rate of ascent. As it approaches the surface, the SLV deploys a water drogue to provide stabilization and a vane to align it into the wind. The tube then pivots to a 35-degree angle and ejects the UAV.
"The SLV is a method of getting a UAS to the surface dry, then transitioning it to the air," says Jeffrey Zerbe, Raytheon's Sothoc program director.
Raytheon successfully tested the system from a surface ship in September. Two SLVs were deployed over the side in Rhode Island's Narragansett Bay. After sinking to a depth of 80 feet, the SLVs reverted to positive buoyancy, floated to the surface, aligned into the wind, and launched an inert, unmanned aerial system, according to the company.
There will be another "over-the-side" test next month, off the California coast. If that goes as planned, there could be a launch from a Los Angeles-class attack boat, near Hawaii, in early 2009.
The program is aimed at extending the reach of sub-based sensors, and the Navy believes it holds great promise in littoral warfare. Besides, the notion of launching a UAV from a submerged sub is pretty cool.
Still, you've got to wonder about the trade-off between what the UAV can collect, and potential detection of its launch platform. While the drone could be useful in identifying targets for the sub's torpedoes and Harpoon missiles, the sudden appearance of a small UAV--miles from the nearest surface group or shore facility--might alert the enemy that an American sub is present.
There's also the matter of how the information is transmitted from the drone. Even if it's invisible on radar, the UAV's uplink/downlink will have a distinctive electronic signature, providing another possible tipoff of sub-based drone operations.
But, members of the Dolphin community shouldn't despair. We're sure that Raytheon can minimize those problems, with more time and defense dollars.