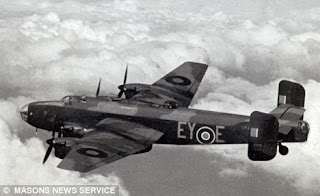 A Halifax bomber of the Royal Air Force (Daily Mail photo)
On a cold winter night in January, 1944, the RAF dispatched 800 heavy bombers on a raid against Berlin. It was a perilous assignment; the German capital was among the most heavily defended targets in the Third Reich, protected by hundreds of anti-aircraft guns, searchlights and deadly night fighters.

For such a mission, Bomber Command would (typically) lose five percent of its strike force, or roughly 40 aircraft. That affirmed the grim reality facing RAF bomber crews; despite their heroism and skill, most would not survive their 30-sortie combat tour. Of the 125,000 airmen who flew for Bomber Command, over 44% died in action or training accidents--a loss rate higher than British infantry officers who served in World War I.

The law of averages caught up with the crews of 27 bombers on that Berlin raid in early 1944. One of them--a Halifax from 102 Squadron--was hit by anti-aircraft fire on the homeward leg of its mission. In moments, the four-engine bomber, nicknamed, Old Flo, was transformed into an inferno; the tail gunner, Sergeant John Bushell, remembered being knocked unconscious, then coming to after being thrown from the burning aircraft.

Bushell and three other crew members survived and were taken to POW camps. The bodies of two other men--the second pilot and wireless operator--were buried after the war. But the bomber's flight engineer, Sergeant John Bremmer and a gunner, Warrant Officer Charles Dupueis, remained unaccounted for.

Seven decades later, the fate of Bremmer and Dupueis haunted Old Flo's other pilot, Flying Officer Reg Wilson. In 2005, at the age of 82, long after his retirement as a management consultant, Wilson traveled to Berlin and began a personal search for his missing comrades.

The U.K. Daily Mail offers a moving account of what he found.
Posted by Unknown at 4:35 PM

Great story. Thanks for posting the link.