As the nuclear standoff with Iran continues to heat up, there is continuing speculation as to how and when Israel might attack Tehran's nuclear facilities.

The most likely option (of course) is an air strike, conducted by the Israeli Air Force (IAF). As demonstrated by the 1981 raid on Iraq's nuclear reactor at Osirak--and the 1995 attack against PLO Headquarters in Tunis--the IAF has the capability to conduct long-range, precision strikes against its adversaries. Israel's military relationship with Turkey has further improved these skills; IAF aircraft routinely deploy to Turkey for long-range navigation training that is difficult to conduct in crowded Israeli airspace.

But the distance of Iran's nuclear facilities from Israel--almost 1,000 miles--creates unique challenges for the IAF. While the IAF's primary strike aircraft (the F-15I) could make the trip with external fuel tanks, other fighters (other F-15s, F-16s) would need air-to-air refueling. That's why the most important asset in any virtually any long-range strike scenario is the IAF's small fleet of KC-707 tankers.

Estimates vary on the exact numbers of tankers in the IAF inventory, but most analysts believe there are only 5-7 KC-707s. These aircraft would be an integral part of any long-range mission to Iran, providing aerial refueling and (possibly) command-and-control functions, such as radio relay. Israeli aircraft use the same "boom" refueling system as the USAF; fighters maneuver behind the tanker as the "boom operator" extends the refueling probe into the refueling receptacle of the receiving aircraft. Once contact is established, the tanker begins pumping fuel to the receiver, at a rate of several hundred pounds per minute.

The number of tankers available, coupled with their potential offload, will limit the size of any Israeli strike package. Again, estimates on the size of the formation vary (depending on the number of targets to be struck, fighter payload, target distance and airspeed), but many analysts believe the Israelis would launch 4-5 tankers, supporting no more than 30 strike aircraft, divided roughly between F-15Is and F-16Is (which would attack the nuclear facilities) and other F-15s and F-16s, flying air defense suppression and air superiority missions. Divide the number of "bombers" (say 15) by the number of nuclear complexes (four), and you'll see that the IAF has virtually no margin for error.

Launching from Ben-Gurion Airport under the cover of darkness, the IAF KC-707s would rendezvous with fighter elements and lead them eastward, refueling enroute under strict radio silence. The most likely flight path would carry these formations over Iraq, although routing through Turkey or across the Saudi desert is also possible. Approaching Iranian airspace, the tankers would turn west, as the fighters break off and head for their targets. After striking the nuclear facilities, the fighters would also turn west and rejoin the tankers, refueling again on the return flight.

The KC-707 is hardly glamorous; it's a reliable, if aging workhorse (most were built in the 1960s and some are older than the crews that fly them--a trait shared with another 707 series tanker, the USAF KC-135). But these aircraft provide Israel's only real option for getting fighter aircraft to distant targets, and delivering their ordnance. That's why the tankers of the IAF's 120 Squadron may be one of Israel's most important strategic assets. 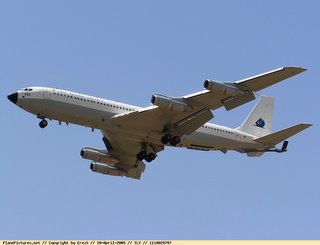 I have flown on commercial 707's and took a hop on a KC-135 in 1961. Believe me, without the amenities of the commercial version it is not a pleasant experience.

Seems to me you have the cart before the horse here a bit. You haven't addressed the most salient issue here: is it possible at all for the Israelis to destroy the Iranian nuclear facilites? Or are they too dispersed, buried, and hidden?

Secondarily, can Israel afford the inevitable political ostracization? Nearly every nation on the Earth would secretly breathe a sigh of relief while rushine to publicly excoriate war-mongering Israel, attacking a sovereign nation without provocation.

Well, that's not what I would do, but I'd tell them about it anyway.

1,000 sniper teams.
Many non nuclear missiles.
A united NATO attack.
Accurate targeting of the bad leaders
in the middle east - all at the same time.

This world smecks of hypocrisy and yellow journalism. Don't forget the religious goons in Arabia either.
~

Is the IAF uses the same refueling system as the USAF, could Israel "borrow" a few tankers from the US in Iraq? They would of course repaint the air force logo, to give the US deniability, but that would increase the number of fighter/bombers for the trip.

Alternatively, Israel could also refuel over Iraq using actual USAF tankers. If the bombing run could be kept as quiet as the recent Syrian one, the US could plausibly deny any involvement.