From Strategypage.com, details on an effort to illegally export high-tech military items to China, including Blackhawk helicopter engines, cruise missiles, and an engine for an F-16 fighter:

"Last week, U.S. authorities charged two foreigners with attempting to export military equipment to China. Ko-Suen Moo, a Taiwanese man, was arrested last November. His partner, Frenchman Maurice Serge Voros, is still at large. The two were trying to export an F-16 engine, forty engines for the UH-60 helicopter, plus cruise missiles and other items, to China. It was not revealed exactly how far along this plot was. China has denied any connection with the two men. However, much military equipment has made its way to China. And China has, in the past, been prepared to pay well for any foreign military equipment that can be gotten into China."

Over the past decade, Beijing has assembled a veritable "shopping list" of western technology that they would like to acquire, including air-to-air missiles, precision-guided weapons, and state-of-the art aircraft engines. To accomplish that mission, the PRC has deployed agents across the globe and assembled a network of front companies, middle men and cut-outs, complicating the job of tying acquisition efforts to the Chinese government, or the People's Liberation Army.

The Chinese have pursued technology acquisition with a relentless determination, and they have achieved some notable successes. By purchasing SU-27 FLANKER and SA-10/20 surface-to-air missiles from the Russians, the PRC has been able to leap-frog from antiquated to advanced systems, and provided the technology for Chinese engineers to field similar, equally sophisticated weapons. Saves a lot of time and money in R&D costs.

Israel has also been a reliable technology source for the PRC, and that fact provides an interesting post-script to the purported F-16 engine acquisition. Back in the 1980s, Israel embarked on an effort to develop (and build) its own advanced fighter. The aircraft--nicknamed the Lavi--was based heavily on early model U.S. F-16s, sold to the Israeli Air Force. The Lavi program was largely funded by U.S. military aid dollars, but eventually, the Israeli government decided that it was cheaper to keep buying F-16s from the United States, and modifying them to IAF specifications.

So what happened to the Lavi? Many of the engineers and technicians associated with the project eventually wound up in the PRC. And, not long after that, the Chinese unveiled their new lightweight fighter, the F-10. Take a look at the photographs below. Note any resemblance between the F-10 and a certain, cancelled Israeli fighter? 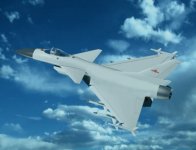 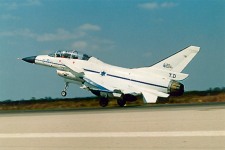 China's access to Lavi technology raises an obvious question: if you've got the blueprints for an F-16 clone--including its subsystems--why bother trying to acquire an F-16 engine? Short answer: there's been a quantum leap in turbofan jet engine technology over the past 20 years. The engines that Beijing may have gained through the Lavi program deliver less thrust--and consume more fuel--that the latest generation of U.S. jet engines. In aerial combat, factors like thrust, weight, and range are critical. An F-10 with a less efficient engine would be at a disadvantage against a U.S. F-15 or F-16 with a better powerplant. Beyond that, China wants to enter the realm of supercruise--a jet engine that allows an aircraft to go supersonic without using afterburners. Moving up to supercruise means developing more efficient turbofans that are the springboard to that advanced technology--assuming that the Chinese don't take the direct route, and simply steal or buy supercruise engined from someone else.

Strategypage didn't specify the particular model of F-16 engine that was apparently bound for China. But I'll go out on a limb and guess that it wasn't one of the early variants, that powered A and B model F-16s in the late 1970s/early 1980s. Beijing is very exacting in the military technology it plans to acquire, right down to a particular type of jet engine.
Posted by Unknown at 2:43 PM