Over There and Gone Forever, Redux 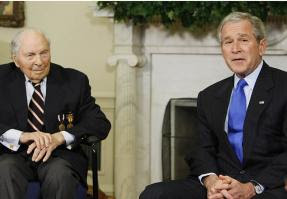 President Bush and Frank Buckles, the nation's only surviving World War I veteran, at the White House on Thursday (AP Photo via Air Force Times)

The a man believed to be the nation’s only surviving soldier from World War I paid a visit to the White House yesterday. President Bush warmly greeted 107-year-old Frank Buckles, who lied about his age to enlist in the Army in 1917. As the Mr. Bush told reporters during a brief photo op:
“Mr. Buckles’ mind is sharp, his memory is crisp, and he’s been sharing with me some interesting anecdotes,” Bush said in the Oval Office. Buckles, in a wheelchair to Bush’s right, sat quietly with his hands clasped as the president spoke during a short photo opportunity.
Bush said that before reporters came into the room, Buckles had recalled chatting with Gen. John J. Pershing, a legendary figure from World War I.
[snip]
“Mr. Buckles has a vivid recollection of historic times,” Bush said. “And one way for me to honor the service of those who wear the uniform in the past and those who wear it today is to herald you, sir, and to thank you very much for your patriotism and your love for America.”
As we’ve noted in the past, Frank Buckles has led a remarkable life. While he never saw combat in the Great War, Buckles endured extreme hardship during World War II. Working as the manager of a steamship company office in Manila, Buckles was captured when Japanese overran the Philippines. He spent three years in a POW camp before being liberated by American troops in 1945.
As the last, surviving link to a generation that saved Europe 90 years ago, Mr. Buckles’ is certainly deserving of the recognition he’s received. Call it an overdue acknowledgement of the service by millions who wore the uniform during World War I.
They came home to a few parades—and a large measure of indifference. There were no education benefits for returning veterans, promises of health care, or guaranteed home loans. Doughboys like Frank Buckles quickly faded into civilian life. A last appreciation for their accomplishments didn’t come until much later, when the last of them began to pass on.
Among the major conflicts of the 20th Century, World War I is the only one without a national memorial. The closest thing you’ll find in the nation’s capital is the District of Columbia memorial, a Peristyle Doric Temple that honors local residents who served in the “War to End All Wars.”
Bounded by the Capitol ground on the east, Independence Avenue on the South, 15th Street on the West, and Constitution Avenue on the north, the D.C. memorial is both modest and remarkable, one of the first to list all district residents who lost their lives in the war, regardless of race or gender.
In 2003, the Washington, D.C. Preservation League added the World War I Memorial to its list of “Most Endangered” places. It made the list again three years later. According to preservationists, the memorial has suffered from years of neglect--a problem compounded by a running debate over who was responsible for the memorial. A records check finally determined that the National Park Service (NPS) was responsible for World War I Memorial.
Unfortunately, the NPS has done little to preserve or restore the structure. There’s no signage to explain the memorial and the lighting is poor. Money that could be used to repair the monument is reserved for the larger (and better known) memorials that line the National Mall.
Just a short walk from where President Bush met with Frank Buckles, the D.C. World War I Memorial is following the fate of those it honors. Almost a century after the conflict it commerrates, and 77 years after its dedication, the World War I Memorial is fading into disrepair and obscurity, with little thought of the sacrifice it represents.
Frank Buckles—and the rest of that all-but-lost generation—deserve better.
Posted by Unknown at 4:36 PM