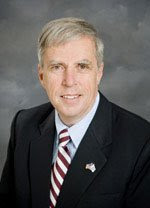 
As a fighter pilot and military officer, the career of Robert “Doc” Foglesong seemed as limitless as the sky.

During 34 years in the U.S. Air Force, Foglesong steadily climbed the military ladder. He flew both the F-15 and F-16, and served in a variety of staff and leadership positions. At various points during his military career, Foglesong was commander of two USAF wings; he worked as Special Assistant to the Chairman of the Joint Chiefs of Staff, and Commander of 12th Air Force, based at Davis-Monthan AFB near Tucson. At the tine of his retirement, Foglesong was a four-star general, in charge of all U.S. Air Force elements in Europe.

Along with his military credentials, Foglesong was also a scholar. Before entering pilot training in 1972, he earned undergraduate, master’s and doctoral degrees in chemical engineering from the University of West Virginia. In an Air Force where most officers have no more than a master’s degrees, Foglesong’s Ph.D set him apart—and produced his inevitable nickname.

With that blend of advanced academic training, executive skills and proven leadership abilities, Foglesong seemed to be prime material for a college or university presidency. And sure enough, General Foglesong found employment in academia after leaving the Air Force, signing on as President of Mississippi State University in 2006.

But, less than two years after assuming that job, Foglesong’s tenure at MSU is coming to an end. Last Friday, he announced that he will leave his post no later than June 30th. In statements released by Mississippi State and the state college board, Foglesong said he is stepping down to “help the university move forward.”

Beyond that rather opaque goal, no reason was given for Dr. Foglesong’s departure. But his exodus caps a rather nasty—and running—battle with alumni, students and faculty, upset over his imperial administrative style, supposed inattention to faculty demands, and the process that brought him to MSU in the first place.

The controversy began two years ago, when Foglesong’s hiring (by the state college board and Mississippi Commissioner of Higher Education Tom Meredith) was conducted in secrecy. Many MSU alumni and supporters had no idea that Dr. Foglesong would be the university’s next president until he was introduced on the Starkville campus.

The former general earned the ire of university faculty by (reportedly) showing little interest in their concerns. According to the Columbus (MS) Dispatch, the issue came to a head last November, when critical comments from a faculty senate meeting found their way into the MSU student newspaper (surprise, surprise).

The remarks were made by a communications professor, Dr. Mark Goodman. They ran as part of an article entitled “Faculty Senate Fed Up,” which appeared in the campus paper on 20 November. In his comments—which Goodman never denied—the professor accused Foglesong of being “uninvolved in the concerns of the senate.”

“He doesn't want to hear what we have to say, he's not interested in our issues and he's going to ignore us,” the Reflector quoted Goodman as saying. “He's The General and he's turned it over to the provost to run the faculty. I don't think we should sit back and take it.”

Foglesong immediately fired back. In an on-line newsletter published in late November, the MSU president made it clear that he did not appreciate Goodman’s comments—or the fact they appeared in the press.
“First, let's remember our motto: One State - One Team. Our shared goal is to move MSU forward and demand the respect we deserve,” Foglesong wrote in a Nov. 26 online newsletter to faculty titled “Time for Some Straight Talk.”

“We can't do that by creating distrust, which leads to mediocrity, which translates into declining enrollment, lost revenue, lost faculty positions, and so on,” Foglesong continued.

“I was warned when I got here that we have some teammates who love to hear themselves in the news,” wrote Foglesong. “I have found that to be the case in almost every organization.”

Foglesong also borrowed a comment from Goodman, who said he was “insulted” by the president’s poor attendance at faculty senate meetings. In response, the MSU president wondered if professors were also “insulted” by the accomplishments of his administration—including a 13% pay raise for faculty and staff—or if they felt embarrassment over the behavior of some of their colleagues:

“..maybe you were embarrassed by the behavior of the faculty member who hid in his closet for 20 minutes on the first day of class, then emerged to take roll after part of the class had left,” said Foglesong. “Perhaps you were offended because some faculty members ignored the warning sirens and messages during a recent tornado alert and carried on with class. I was insulted by that.”

“Unfortunately, there's more of this stuff. Wonder why this isn't in the newspaper? It's because we're bigger than that. At least most of us are,” Foglesong continued, and urged faculty and staff to take their concerns to him first, and not the media."

The beleaguered MSU president also caught flack from students. Some protested his selection, others in support of faculty grievances. And a handful of students were upset about a visit by Playboy magazine to Starkville, in search of models for a future issue. When Foglesong noted that the student newspaper had a right to report on the auditions, a leader of the anti-porn protest wondered if Playboy’s appearance would “negatively affect” the president’s reputation.

After months of battling with students, faculty and university supporters, Foglesong decided to call it quits. He’s expected to leave Starkville before the scheduled departure date, and state officials are initiating the search for his replacement.

Having served on a college faculty, we can certainly empathize with Dr. Foglesong.

Satisfying the various university constituencies is a difficult job, even for the most talented administrators. And sniping from the faculty senate never helps. Imagine a covey of tenured critics—many of them with their own pet agendas—and you’ve got some idea of what a college president faces on a daily basis.

But, in fairness, Foglesong was probably a poor choice for the MSU post, and we wonder if his nomination would have survived a public confirmation process. While no one has ever doubted Foglesong’s honesty or integrity, he had a reputation in the Air Force for being difficult and arrogant (not exactly rare qualities among fighter pilots).

One retired senior non-commissioned officer, who served under the general, described him as “jerk.” Another former Air Force member, posting on the MSU student paper's website, claimed that Foglesong's "extreme micro-managing, petty reprisals and 'dodgy' use of military funds were legendary."

So, it’s no surprise that the retired general’s brusque style rubbed faculty, students and staff members the wrong way. But, given the political leanings of most university professors, we wonder how many MSU faculty members opposed the president because of his military background.

With his departure, Foglesong becomes the second retired Air Force general to leave a high-profile education post in recent years. In 2005, former Lieutenant General Joseph Redden resigned as school superintendent in Cobb County, Georgia. Like Foglesong, General Redden also posted a number of achievements during his tenure. But he also fought with education bureaucrats, and came under fire for his proposal to buy laptop computers for every student in the system—at a cost of $70 million.

Compared to the education wars, Foglesong and Redden discovered that running a large military command or flying a combat jet is a lot easier—and a lot less stressful. Based on their experiences, we’d guess that other retired generals will think twice about applying for leadership positions at major universities, or in large public school systems.
Posted by Unknown at 8:38 PM

An Air Force general turns out to be a prick? quelle surprise. As a class, USAF brass runs remarkably true to type.

First, I think the evidence of bias against an administrator with military background to be lacking in the post. Not that I doubt there was some, but this post sort of blithely assumes it exists without laying out any evidence. Without any information about specific cases of anti-military bias (common though it may be), I don't really see the utility in bringing it up.

Secondly, I think the departure of an administrator with a military background is an unfortunate thing. I would hope that more prior military people would take jobs in academia, for no other reason than to counter the anti-military bias of some of the faculty and students. The military has always been exceptional at leading by example and several prior military people among the staff at any university would go a long way to countering the rumors, innuendo and falsehoods about military service, doctrine and culture. This is not a dig on the author of the post, but rather an expression of regret. I would hope that the two examples of prior military members in academia don't discourage too many of their fellow members of the armed services. Those ivy league walls should be stormed, not abandoned to the enemy.

The military isn't necessarily good at leading. It's good at telling people where to go, and it's good at going where it's told. A good leader inspires his troops to perform, but even a bad one can be quite certain that his soldiers will shut up and soldier.

You're right that the close presence of former military people would be a good thing, but that's a PR position--and nobody's going to claim that everyone in the world is equally good at it.

Fogeldouche was pretty unanimously hated by everyone in his command. Everyone mocked him, for good reason.

It's no surprise that his tenure at MSU ended like this.

Good riddance Fogeldick, you won't be missed. Of that, I'm sure.

"Doc" had this mindset...of "I'm going to fix it...whether its broke or working or top-notch"...and you just sat there laughing at all of folks who lined up to say nothing. When you read his comments in the past day or two...you get the impression that he had no open mind or willingness to listen to anyone else. I'm surprised he lasted this long...and am pretty sure that this is the last you see of "Doc".