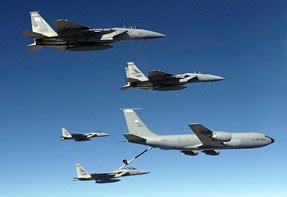 No jumping, please. The USAF plans to eliminate parachutes for tanker crews.
Air Force Times reports that the service has figured out a new way to save money--get rid of parachutes carried on KC-135 tankers.

According to a press release cited by the paper, "the likelihood a KC-135 crew member would ever need to use a parachute is extremely low." The parachutes cost too much — in acquisition, maintenance and training — to make up for their relative uselessness on Stratotankers, according to the news release. Inspecting parachutes before flights is also extremely time-consuming, the Air Force claims.
Quite frankly, I think the idea makes a lot of sense. As one boom operator observed, if the aircraft is controllable, the crew isn't going to bail out. If it's out-of-control, the odds of reaching your chute, snapping it on and getting out the door are well...practically non-existent.
During my own days as a crew dog, I flew on a battle management platform. Our crew capsule was mounted in the cargo bay of a modified C-130. With a full battle staff, we had up to 15 people inside the capsule, which was also crammed with communications equipment, computer displays, seats and personal gear.
Saying it was a bit crowded in the back end of our aircraft would be an understatement. Still, our accommodations were almost spacious compared to other platforms. During a mission over Bosnia, we had an RAF warrant officer fly along with us. He was a linguist on a Nimrod SIGINT aircraft. As he described it, the crew compartment of his aircraft was crammed with kit, and an average of 25 linguists, EWOs and ELINT operators.
While the Air Force thoughtfully provided parachutes for our C-130s, bailing out would have required a Bolshoi-like ballet. Imagine coordinating the movements of 15 crew members; everyone had to stand up, grab the chute (from beneath their console), strap it on; line up, de-pressurize the aircraft, open the capsule and parachute doors, and then bail out.
By the time that happened, we figured, the plane would have crashed, or we could make an emergency landing. The same logic applies to a KC-135. Retire the chutes and save a little weight and money. If nothing else, the life support troops will be happy.
Besides, at one time it was considered poor form to jump out of a stricken aircraft. If it was good enough for Frank Luke and Eddie Rickenbacker, it ought to be good enough for today's Air Force. Live in fame or go down in flames. Literally.
***
One thing we don't understand about the Air Force press release is the reference to "harnesses that will secure them to the airplane" when they're in danger of falling out. In our experience, the only time a tanker crew would face that risk is loading or off-loading cargo. And, as we noted in a recent post, the cargo-hauling mission of our tanker fleet is often over-stated.
Posted by George Smiley at 4:37 PM

I'm so glad you gave your opinion on this - the headline was a real grabber for me. But now it does make sense.

Yeah, it makes sense until a tanker crashes and the media has a field day with the headline "TANKER CREWS LIVES WORTH LESS THAN COST OF PARACHUTES."

Bad PR. Like a lot of things, it makes since if you think it through, but the sound bite is terrible.

It reminds me of the WW2 study that showed that bombers would be better off without defensive armament because they could fly higher and faster. That didn't fly, so to speak.

Good to hear an informed opinion on this. John is right about the bad PR, but I'd bet if you polled the crews, they'd agree with you.

The next step is to eliminate the crew. Is there a tanker UAV somewhere in the future?

Yes, but if just one crew member got out would it be worth it.

It is easy to say you don't need something when everything is going swimmingly. I for one would like the opportunity to escape from a slowly burning aircraft, or any other circumstance where the aircraft can fly long merrily while everyone waits to be consumed.

How about figuring out how to make the parachute and harness less bulky, and improve egress procedures. My, that would be a pain in the ass as well.

What, you didn't know that the capsule you were in had a big parachute on top? The emergency plan was to just open the doors and kick it out. The parachutes drills were done just to amuse the crew up front ;)

Seriously, I thought they took the chutes out years ago...