The Rest of the Story? 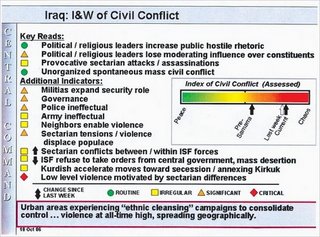 As you probably know, The New York Times recently printed a slide from a classified CENTCOM intelligence briefing that shows Iraq sliding toward chaos.

The key word here is "slide," since intelligence briefings invariably consist of multiple slides, depending on the topic and audience. I should know; during a 20+ year military career, I pulled two tours as an "intel talking dog," the command briefer who assembled and delivered intelligence briefings for senior officers. It was the military equivalent of a Broadway opening night, three (or more) days a week. New material for a tough, demanding audience. And if you didn't know your stuff (and couldn't think on your feet), well, there are more briefers where you came from.

Serving as a command briefer taught me more than a few valuable lessons. First, there are few (if any) dumb generals. Secondly, to paraphrase Colin Powell, bad news doesn't improve with time or distance from the event. And finally, don't create an eight-foot (fill in your favorite bad guy) if he's really only six feet tall. In other words, be accurate in your assessments, because intelligence inevitably drives ops.

If you look at the CENTCOM slides, the situation in Iraq looks pretty grim; growing sectarian violence, political upheaval, ineffective security forces. And, there has clearly been a dramatic move toward "chaos" since the Samarra mosque bombing earlier this year.

But is that the entire story? What information did General Abazaid (or his deputies) receive in the rest of that briefing? If the entire briefing was leaked to the Times, why did they devote the entire article to a single slide? It's very tempting to say the paper focused on the single slide that depicted the situation in Iraq in the very worst terms. If the Times received the entire briefing package, then they owe it to their readers to tell us what was in the rest of the presentation, including any information that affirms the I&W Slide, or--on the other hand-- offers more positive developments from Iraq.

If I were General Abazaid, I would consider declassifying as much of the briefing as possible, along with similar I&W slides from previous briefings, and presentations in the coming weeks. A side-by-side comparison of those slides would provide a much more accurate barometer of conditions in Iraq that a single "snapshot" slide that was developed at the end of a very tough month in that country. With the end of Ramadan, violence in Iraq is reportedly dropping, and that may cause the "infamous" arrow to move back toward the left. Wonder how the Times would assess that sort of development--if they even bothered to publish that slide.

Make no mistake: these are tough times in Iraq and we are approaching critical mass in that conflict. But a single slide from a single briefing may not be an accurate measure of what's going on in that country. If the Times was genuinely interested in the truth, they would press their source for an archive of the slides, over a period of several months. Those slides would not present a rosy picture of Iraq, but they would reflect how intelligence indicators change over time. But, of course, that sort of depiction doesn't have quite the visceral impact of a single, snapshot slide taken at the end of Ramadan, when violence in Iraq is at its peak. Besides, it's hard to influence an election if your visuals show occasional dips and ebbs in the fighting.
Posted by Unknown at 4:05 PM

Actually, having come back (2 Oct) from theater I can tell you that the BUA (Battlefield Update Assessment) is a relatively consistent presentation of data. I don't know about after I left because I haven't paid that much attention, but the overall trends are fairly flat across the board.

That looks like a CENTCOM particular slide for Abizaid, but as you mention, out of context, it is irrelevent.

Can you tell me whether anybody who matters is surrently worrying along these lines?

The US withdrawel from Iraq leaves one nation able and willing to dominate the region. Iran. The neighboring states--the ones with the oil--make their accomodation with Tehran. The upshot is a Koran Curtain slamming down around the mid-east, shutting off oil and natural gas to Great Satan and its various Little Satans. (China becomes their big and generous customer) Then it gets worse.

The community of nations being an ape pack, Russia & Venezuela see their chance to turn on the USA Alpha male, and use their power to shut off their oil taps too. In effect, a new and lethal Warsaw Pack forms, whose members are the energy-rich gangster regimes plus China.

Thanks 86 you present valid points clearly through out this blog.

Hypocrisy and partisan politics - you said it and I can believe it of the NYT, they have continuously been attacking the Bush administration throughout the whole war to date. There really is something rotten going on at the NYT and in that Jack-ass party, they appear to be the all anti-American party and I am lead to ponder and consider that the existence of a lower power dose indeed manifest itself in the form of the Democrat.

Remember there is an active enemy propaganda organ in operation during this war and they are doing all they can to discredit the Republicans. - I was informed recently that there are more billionaires who hate the Bush administration than do not, hmmm... Well, from the view of an outsider from Canada I have mostly seen the Democrat as contradictory to common sense, and I do try to weed through the bias as best I can. Must be al those lose morals catching up with them.


A Determined Ally - with friends in Iraq, as well as countrymen in the Afghan.