Fallout is continuing from last month's successful shadowing of the USS Kitty Hawk by a Chinese Song-class diesel sub.

In Beijing, the PRC Defense Ministry is refusing comment on the incident, which occurred on 26 October. According to Bill Gertz of the Washington Times, the Chinese sub slipped undetected inside the U.S. carrier's defensive screen, then surfaced only five miles from the Kitty Hawk, which was operating near Okinawa at the time. China's official silence on the matter is probably an effort to spare further embarrassment to Admiral Gary Roughead, Commander of the U.S. Pacific Fleet, who is currently visiting the PRC on a long-planned visit.

Over at DefenseTech.org, Noah Schactman was kind enough to link to some of our observations on the incident. He also has an e-mail from a former commander of our sub force in the Pacific, retired Rear Admiral Hank McKinney, who notes the difficulty in detecting advanced diesel subs, particularly those fitted with ultra-quiet AIP (Air Independent Propulsion) systems. Currently, there is no hard evidence that the Song boat which trailed the Kitty Hawk was outfitted with an AIP system. However, China has great interest in this technology, which uses fuel cells (instead of a diesel engine) to recharge the submarine's batteries, making an already quiet sub even stealthier.

The Swedish Navy already has an AIP sub in service (HMS Gortland). For the past year, that boat has been operating out of San Diego, providing training for U.S. Navy ASW units. Initial reports suggest that the Gortland is extremely hard to detect, and the Navy recently announced that the training agreement would be extended by a year, to provide more time for training against the AIP boat, and development of tactics for dealing with that threat. Germany, Italy, Greece and Pakistan all have AIP boats on order, and it would be relatively easy for the PRC to obtain the technology, and incorporate it into new attack subs.

Over at DefenseTech, Admiral McKinney wonders if the Chinese might have staged the incident to coincide with Admiral Roughead's visit. That's possible, but that theory is predicated on a couple of long shots: (a) that the sub would successfully complete its mission, and (b) word of the episode would be leaked--by the U.S. Navy--while Admiral Roughead was visiting China.

Bill Gertz, who originally broke the story, based his reporting on information from unnamed "defense officials," indicating that the leak came from within the Pentagon. My guess is that the story was planted by one of Admiral Roughead's rivals within the upper ranks of the Navy. As Commander of the Pacific Fleet, Roughead holds down one of the plum jobs in the U.S. Navy; his selection for that post means that other officers were passed over, and one of them might have viewed the sub incident as a chance to exact a little revenge. Another source for the leak is a disgruntled former staffer, who served under Roughead in a previous assignment. You don't reach four-star status without making a few enemies, or leaving a few disappointed subordinates in your wake.

There's also the possibility that Gertz obtained his information from a senior officer or official in another branch of the armed services, anxious to illustrate the "vulnerability" of carrier groups, and the potential folly of funding more capital ships that can be sunk by a single, relatively cheap diesel sub. Rule #1 in the DoD budget wars: you can get more money for your stuff by making the other guy's system look vulnerable.

I think Admiral McKinney is right. The timing of this story was intended to embarrass Admiral Roughead during his visit to China. But the leak has all the trademarks of an "inside job," originating within the senior ranks of the Navy, the joint staff, or a rival service. Regrettably, such leaks are part and parcel of how business gets done in the Pentagon. That Chinese sub simply provided the event; Roughead's "rivals" (for lack of a better term) did the rest, in the pages of the Washington Times.

In the wake of the sub story, the Navy has released this photo of the USS Asheville, a Los Angeles-class attack sub, steaming ahead of the Kitty Hawk during joint exercises with Japanese defense forces. It would be interesting to know if the Asheville was attached to the Kitty Hawk battle group when it was surprised by the PRC sub. As we've noted before, one of the jobs of an LA-class boat is to keep enemy subs away from the carrier. If the the Asheville was part of group at the time of the incident, then the sub's skipper may be on his last cruise, although there's plenty of blame to go around. 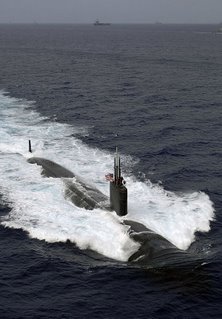 It was most kind of the Chinese to let our ships know how vulnerable they are. I wonder what the motive was.

My guess is that the PRC have an ongoing strategy to test USN defense systems, including ASW detection. Whether the Chinese sub skipper "got lucky" or not is irrelevant, as is the timing of the incident (coinciding with Adm Roughead's official state visit).

What is important here is that one of Rumsfeld's biggest sacred-cow fights just got justified (Rummy's concerns that 90,000+ tonne aircraft carriers might as well have a gigantic target painted on their decks, with the words, "HIT ME!", and all the military and political fallout that would accompany a successful strike against a Nimitz-class CVN). Hence the recent leak about this little surprise.

DoD major weapons systems procurement is so broke it's not even funny. Compare and contrast: F-22 has taken over 25 years to go from conceptual wet dream to operational deployment. By comparison, SR-71 took only 18 months to go from to evolve from a napkin sketch (in 1962) to first flight test, and approximately four years to be completely operationally deployed. At the time, SR-71 was one of the most complex weapons platforms ever developed. Another example of such relative speed of development of a complex weapons system concept was the XB-70. But these days, 25 years seems to be the standard timeframe for deployment.

Therefore if one administration starved ASW systems deployment and upgrade capabilities years ago (as Spook previously mentioned Clinton having done), all those lost years are just that - lost.

It won't be long before ASW capabilities will have atrophied enough to where CVNs are sitting ducks to a relatively cheap diesel sub that any third world wanker despot can afford (like Ahmadinejad). If I recall, a strike against one Nimitz-class CVN would potentially kill 5,000 men, lose 90+ aircraft, and sink a ship that costs over $7bn and takes over 7 years to build.

We let our guard down very badly when the Soviet Union disintegrated in 1991. If you think we won't do so again, just listen to what the Democrats who will chair the Armed Services Committees next year are saying in regards to military budgets.

It's gonna get worse. A lot worse.

As we've noted before, one of the jobs of an LA-class boat is to keep enemy subs away from the carrier.

A SSN attached to CSG has many jobs which take it away from the vicinity of the carrier and her escorts. It's the job of the escorts to keep the bad guys away. Asheville's CO will not be fired over this, nor will anyone else.

Diesel boats are very hard to detect and track. However, they have limited submerged endurance without snorkeling and they can't keep up with a surface warship. In exercises, units are shoved together in a small area so they will make contact. In wartime, that carrier would be running all over the ocean and not tooling around in an area, participating in a pre-announced exercise so that the Chinese could send in a boat.

This whole thing is a tempest in a teapot.

I have gone through this blog. I found it very interesting and helpful. Now a days I am doing my work from my home only.
And this blog is really doing great for me. And got extra income from my home.