Send in the Marines 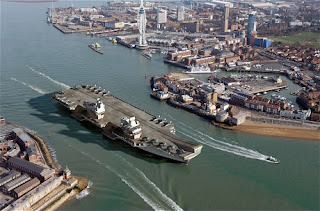 A computer-generated image of the HMS Queen Elizabeth leaving Portsmouth harbor.  The Royal Navy has announced that USMC F-35s will be the first attack jets to operate from the new carrier, while British squadrons attain initial operational capability (IOC) with the aircraft (BAE Systems image via UK Telegraph)

Suppose you have a brand-new aircraft carrier, but the jets that will operate from that ship won't be available in sufficient quantities for another five years.  How do you utilize that platform to its full capabilities in the interim, without its primary strike asset?

For Britain's Royal Navy, that is the near-term challenge: their new fleet carrier, the HMS Queen Elizabeth, is in the final stages of construction and will begin sea trials next summer, with initial flight training in 2017-2018.  But with the RN's first F-35 squadrons not scheduled to achieve their initial operating capability until 2020 (at the earliest), the Brits are looking for aircraft that can embark earlier and provide a combat punch before their own Lightning IIs are ready for action.

The solution is a lesson in creativity and coalition warfare.  According to the U.S. Naval Institute, the RN has reached agreement with the U.S. Marine Corps to deploy F-35 squadrons on the Queen Elizabeth until British units achieve their IOC in the jet:

Rear Adm. Keith Blount, who is responsible for delivering the two 65,000 ton ships, said that using Marine aircraft and pilots to bolster the U.K.’s nascent carrier strike capability would be a natural extension of coalition doctrine.

“We are forever operating with allies and within coalitions. It’s the way wars are fought”, the Assistant Chief of Naval Staff (Aviation, Amphibious Capability and Carriers) and Rear Adm. Fleet Air Arm told an audience at the DSEI defence exhibition in London on Wednesday.

“In order to get the best out of [the U.K. carrier program] we have to be able to situate it in a coalition context. That could mean that we operate with an American ship as one of the protecting escorts”, Blount said.

“So yes, I expect the U.S. Marine Corps to operate and work from the deck of the Queen Elizabeth-class aircraft carrier. We are going to get the most bang for the buck we can for the U.K. taxpayer, and that’s one of the ways in which we’ll achieve it.”

A Marine Corps fighter attack squadron (VMFA-121) became the first unit to achieve an initial operating capability with the F-35B in late July; the squadron--based at MCAS Yuma, Arizona, currently has 10 Lightning IIs available for worldwide deployment, and might be an early candidate for for a visit to the RN's new carrier.  Two other Yuma-based squadrons are scheduled to convert to the F-35 by 2018.

While British pilots and ground crews are currently training on the Lightning II in the U.S., the first UK-based squadrons won't begin forming until 2018.  Without the Marine presence, the Queen Elizabeth would be little more than an over-sized helicopter carrier for a couple of years, until the RN's first F-35 squadrons become fully operational.

The interim combination could also provide a little more punch in places like the Persian Gulf and the Baltics, where the down-sized U.S. Navy is already stretched thin.  As we've noted previously, the American fleet suffered a "carrier gap" in the western Pacific this summer, and for the first time in recent memory, there will not be a U.S. carrier operating this fall in the Persian Gulf.  While the Queen Elizabeth is about two-thirds the size of a Nimitz-class carrier (and can embark no more than three dozen F-35s), it could be a useful gap-filler, or extend the coalition presence into areas where U.S. carrier groups aren't patrolling.

At one point, the British government contemplated scrapping the ski ramp/VSTOL aircraft combination for the Queen Elizabeth and its sister ship, the Prince of Wales (still under construction).  Switching to a catapult/arresting gear system for launch and recovery would have allowed the UK to buy a more capable version of the F-35.  But adding the catapults, arresting gear and related hardware would have stretched construction times and increased costs.  With the Marine Corps already at IOC with the F-35B--and capable of operating from a ski-ramp carrier--the notion of embarking USMC squadrons on the Queen Elizabeth makes a great deal of sense.

Aren't the french involved, too?

They were...France planned to build a new fleet carrier based on the design of the Queen Elizabeth, but it was cancelled in the defense white paper released in 2013. For now, they have one "large" carrier, the Charles de Gaulle, which has been beset y mechanical problems and design defects.

I know the RN has eliminated the rum ration (Pussers Navy Rum is delicious), but last I knew RN ships still served beer. If this is so, and there's a bunch of squids on board, they better stock up.

But they still have bum and the lash, don't they? Or have they gone completely to Hell?

PS. I believe Royal Navy pilots are assigned to American carriers for flight training until the Elizabeth is fully operational.