Back to the Future (AGI Edition) 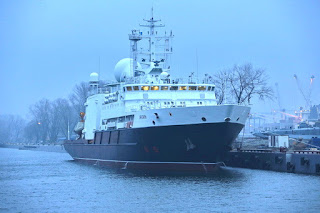 Russian spy ship Yantar, in port earlier this year.  The vessel was sighted off the Canadian coast last month and is believed headed for the waters off Kings Bay, Georgia, home to the ballistic missile subs of the U.S. Atlantic Fleet (Washington Free Beacon photo)

Almost 30 years ago, your humble correspondent was a military intelligence officer at a base in the southeastern United States.  My unit's aircraft and crews frequently trained in military operations areas (MOAs) and special use airspace off the coast of Georgia and Florida.  Other missions took them along low-level travel routes (LLTRs), including VR 1040, which roughly parallels the shoreline from St. Simons Island to St Augustine.

Occasionally, my pre-mission briefs would include a warning about a Soviet intelligence trawler (AGI) lurking off the coast.  In those days, the collection vessels were frequent visitors to the waters off our southeast coast, shuttling back and forth between King's Bay, Georgia (home to the ballistic missile submarines of the U.S. Atlantic Fleet) and Naval Station Mayport in Jacksonville.  While the Russians referred to them as "fishing trawlers," their intended "catch" was military communications related to ship and sub movements, along with other intelligence data.

We also knew the Russians kept tabs on tactical flight activity in the MOAs and along the LLTRs, so we reminded crews to practice good communications security.  We also told them to avoid "buzzing" the Soviet vessels, which often loitered along the edge of international waters.  Moscow's intel trawlers and "research ships" (which was often a cover for larger collection platforms) were known to aim a laser at low-flying aircraft from time-to-time, potentially causing damage to anyone looking towards the vessel without protective goggles.  As I recall, our pilots and crews never had a problem with the spy ships, but prior to the collapse of the USSR, it was almost guaranteed that a collection vessel would deploy to the King's Bay/Mayport area at least three or four times a year, for extended periods each time.

Now, as Bill Gertz of the Washington Free Beacon has learned, the Russians are back, and with a more advanced collection platform:

U.S. intelligence ships, aircraft, and satellites are closely watching a Russian military vessel in the Atlantic that has been sailing near a U.S. nuclear missile submarine base and underwater transit routes, according to Pentagon officials.

The Russian research ship Yantar has been tracked from the northern Atlantic near Canada since late August as it makes its way south toward Cuba.

Defense officials familiar with reports on the Russian ship say the Yantar is believed to be gathering intelligence on underwater sensors and other equipment used by U.S. nuclear submarines based at Kings Bay, Georgia. The submarines, their transit lanes, and training areas stretch from the coastal base through the Atlantic to Europe.

Intelligence analysts believe the ship, one of Russia’s newest military research vessels commissioned earlier this year, is part of a larger strategic intelligence-gathering operation against U.S. nuclear missile submarines and other targets.

In response, the Pentagon says it respects the "freedom of all nations to operate military vessels in international waters in accordance with international law.”

Unlike the earlier AGIs (which were primarily SIGINT platforms), the new-generation Russian spy ships have an array of sensors and systems for gathering information, including a deep sea submersible. Recent media accounts suggest that Moscow is very interested in mapping the locations of undersea communications cables and other sensors.  Vessels like the Yantar may also have the ability to tap into those cables, by placing collection pods that can collect and store information before being retrieved by submarine or a remotely-piloted submersible.

Vessels like the Yantar also have the ability to disrupt undersea communications.  Such attacks mesh well with the so-called "hybrid warfare" techniques utilized by Russia in recent conflicts with Georgia and Ukraine.  Hybrid warfare combines traditional military capabilities with information warfare tactics, including cyber attacks.  Cutting undersea cables--or mapping them for future targeting--could be an important part of an overall hybrid campaign.

While the Yantar only recently joined the Russia fleet, other spy ships have operated near the U.S. coast in recent years.  In 2014, the Viktor Leonov was sighted off King's Bay for an extended period, before docking in Havana, Cuba for a port visit.  A sister ship, the Nikolay Chiker, also operated near King's Bay last year.  With the addition of the Yantar, Moscow could establish a near-continuous presence along the east coast.  At last report, the newest Russian spy ship was near the Turks and Caicos Islands, about 760 miles from King's Bay.

Of course, the U.S. has long mounted similar efforts against the Russians; perhaps the best-known program was an effort by NSA, the U.S. Navy and Bell Labs to install nuclear-powered collection pods on Soviet undersea cables in the 1970s.  Nicknamed "Ivy Bells," the effort was highly successful until it was exposed by NSA turncoat Ronald Pelton in 1980.

Pelton sold out his country--and the program--for $35,000.  He was sentenced to three consecutive life terms in federal prison.  Pelton is scheduled for release in two months.
***
ADDENDUM:  Throughout the Cold War, Soviet AGIs routinely shadowed U.S. carrier battle groups, sometimes deliberately steaming in front of a flattop, attempting to disrupt flight operations.  But on one day in 1967, in the Gulf of Tonkin, a U.S. Navy pilot from the carrier Bonhomme Richard exacted a measure of revenge.  From the annals of VFP 62:


The pilots of the air wing were strictly forbidden to take any action against he Russian ship, but one day CDR John Wunche, the commanding officer of theheavy tanker KA-3B detachment, had finally had enough of the Russians' antics.
John Wunche was a big man with bright red hair and a flaming red handlebar mustache. He was a frustrated fighter pilot whom fate and the Bureau of Naval Personnel had put into the cockpit of a former heavy bomber now employed as a carrier-based tanker.

The "Bonnie Dick" had nearly completed a recovery.The Russian trawler had been steaming at full speed to try to cut across our bow, and the bridge watch had been keeping a wary eye on the intruder. For a while it looked as if the Russian would be too late and we would finish the recovery before having to give way to the trawler.But a couple of untimely bolters extended the recovery and theBon Homme Richard had to back down and change course to comply with the rules.

The LSO hit the wave-off lights when the "Whale" was just a few yards from the ramp. John crammed on full power and sucked up the speed brakes for the go-around. The "Bonnie Dick" began a sharp right turn to pass behind the Russian, causing the ship to list steeply, and there, dead ahead of John, was the Russian.

He couldn't resist. He leveled the "Whale" about a hundred feet off the water and roared across the mast of the Trawler with all fuel dumps open like a crop duster spraying a field of boll weevils. The Russian disappeared in a heavy white cloud of jet fuel spray, then reemerged with JP-4 jet fuel glistening from her superstructure and running lip-full in the scuppers.
The Russian trawler immediately lost power as the ship's crew frantically tried to shut down anything that might generate a spark and ignite the fuel. She was rolling dead in the water in the Bon Homme Richard's wake-- her crew breaking out fire hoses to wash down the fuel--as the Bon Homme Richard steamed out of sight completing the recovery of the Whale.

The Red Baron was an instant hero to the entire ship's company.